A short screed on Craigslist is making the rounds [Ed. Note: The post was removed, but it's screencapped below], posted in the Rooms & Shares section for Oakland, titled "STOP MOVING TO OAKLAND." What follows is a familiar, fist-shaking rant from someone who likely was once a newcomer to Oakland themselves (SFist's Eve Batey guesses around 2009), railing against all newcomers "from New York, from LA, from Silicon Valley" with their "bad over manicured facial hair and fixed gear bicycles," because, according to this person, Oakland used to be perfect before their arrival, and they're ruining everything.

This exact same open letter could have been written 15 years ago, or 2 years ago, about the Mission  hell, it could have been written 10 years ago about Oakland. And it will of course strike a chord with everyone who hates change, and gentrification, and hipsters. (The Mission hipster may not be dead, of course, as that essay from earlier in the week had it, but maybe they all just colonized Oakland in the last two years?) And it operates under a whole lot of assumptions  the biggest being that the writer believes he or she speaks for all of Oakland when he or she writes, "We're blue collar, we're busted, we struggle to keep our heads above water, healthy food on the table, roofs over our heads. We're not start ups and cafes and gastropubs (WTF? Gastropub?) We're doughnuts and churches and liquor stores."

There are and always have been plenty of well off people in Oakland who like upscale restaurants, and don't identify with "doughnuts and churches and liquor stores." Oakland is certainly far more diverse than San Francisco  it's in fact one of the most diverse cities in the country, with about 30 percent each of white and black people, and 20 percent Latinos and 20 percent Asians and others. It's also, especially now, more economically diverse than San Francisco, with a lower median household income  $51,000 compared to SF's $76,000. And the crux of this rant seems to be about greedy landlords taking advantage of the boom, and allowing neighborhoods to gentrify.

But doesn't anyone else want to call bullshit on this kind of rhetoric and attitude? We all understand the frustration, especially seeing people displaced by rising rents, but is it ever an intelligent stance to say, "New people aren't welcome"?

SPUR's Gabriel Metcalf argues that it's exactly that attitude, borne among SF's progressives, that's responsible for the housing crisis (and hence, rising rents) that we're having now. And regardless of whether you agree with him, does it make any logical sense to ask for change to stop, for a city to stay frozen in time, and for everyone to stay put and/or stay out?

But, I suppose, sentiments like these aren't rational. So, share it on social media, say "fuck yeah," and move on. 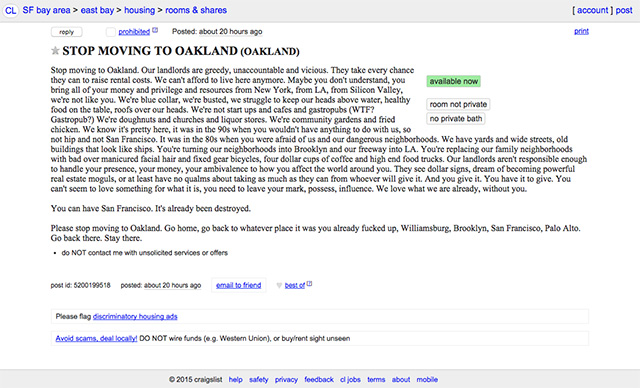 This awesome cover of The Weeknd's big summer jam "I Can't Feel My Face" by the very talented Andrew Huang was played entirely on dental equipment in an actual dentist's office. Instruments include

A San Francisco State University student who was shot during a San Jose show by controversial performer Chris Brown is now suing the entertainer, claiming that Brown's violent past was in part the

—
Oaklander Rails Against Gentrification, Tells Newcomers To Stop Moving There
Share this