The small print on the new website, No On F, reads "Paid for by SF For Everyone, No on Proposition F, Sponsored and Major Funding by Airbnb." SF For Everyone is, as the Chronicle writes, waging the latest battle in the homesharing wars. And now the fight is focused on Prop. F, which we learned in early July would be coming to a ballot near you. That would overhaul the Board of Supervisors' short-term rental ordinance, dubbed the 'Airbnb Law,' which passed last year and took effect this spring.

Proponents of Prop F say it would replace the perhaps unenforceable ordinance with something that has teeth. But meanwhile, opponents of Prop F. — Airbnb and its supporters chief among them — protest that the existing law, recently amended, hasn't been given time to gain currency and efficacy. Didn't the new City Office of Short Term Rental Administration and Enforcement (population: 6) just get off the ground, they ask?

Prop. F would limit short-term rentals to 75 or fewer days a year, whether a host is present or not — that's down from 90 days, as the law currently holds. Also, if adopted, the proposition would require quarterly reports from hosts: They would be handing over information to the city, not just Airbnb. But the biggest stink Prop. F's opponents are making has to do with lawsuits, because the potential for lawsuits probably does scare and inspire a lot of hosts. It might become easier, SF For Everyone argues, for neighbors and other entities to sue you for Airbing your extra room without registering or for too many days — and even target Airbnb with it.

As it stands, building owners and residents, neighbors, housing nonprofits, and homeowner associations can all sue alleged Airbnb Law violators if they simply file a complaint with the city and wait 135 days. Next, if things are left unresolved during that period, the neighbor/nonprofit/building owner etc. notifies the city attorney and waits another 30 days to see if his office files suit.

Plaintiffs who win lawsuits can receive attorney fees and costs. If the city attorney's office wins in court, the city can receive civil penalties — up to $1,000 per day.

By contrast, Prop. F says plaintiffs of the above categories who prevail in court should receive special damages themselves on top of those attorney fees — $250 to $1,000 a day. If they want, they can sue hosting platforms such as Airbnb as well as the individual host accused of the violation (after lodging a complaint and waiting 90 days). 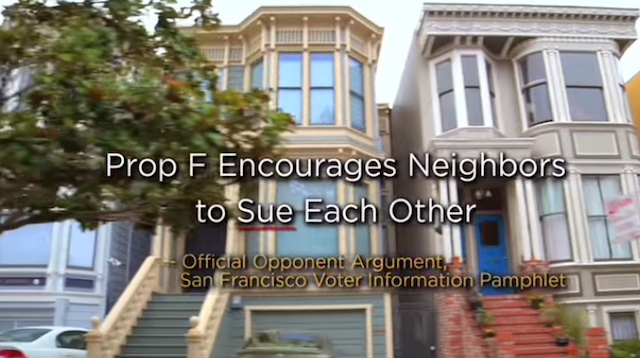 One key difference with Prop F. is that neighbors and others can still go ahead and sue even if the city wouldn't have or wasn't yet ready to. And, says Chris Lehane, Airbnb’s recently appointed head of global policy and public affairs. “This will lead to lawsuit vigilantism,” His argument is that Airbnb should be regulated by the city, not NIMBY neighbors.

Senator Dianne Feinstein, a fierce foe for Airbnb and its ilk, is in favor of Prop F., which “closes loopholes and provides effective enforcement tools.” She said the current law is unworkable and unenforceable, and guts zoning regulations while incentivizing “illegal conversion of residences to de facto hotel rooms.” She said, classifying Prop F. as a “common sense change.”

Mayor Lee disagrees with Feinstein, writing of the proposition that it is “entirely unnecessary” because San Francisco already has “common sense short-term rental regulations”. He calls Prop. F "too extreme," arguing as Airbnb does that not only would t encourage lawsuits, but that it would violate privacy by forcing renters to share their information with the city, not just with Airbnb.

But, “Lawyers won’t bring claims that are invalid,” says Joe Tobener, a tenants-rights attorney. "The only people who will be pursued are bad actors who are violating the statute... It’s expensive to file these claims; you have to hire an investigator and have proof.”

“If you ask an attorney to take a risk on a contingency case, there has to be enough value for them to do that,” Tobener said. Even if those suing prevailed in court against hosts, actual damages would be small for such inconveniences as a few noisy nights or some parking being blocked. San Francisco Superior Court can deny attorney fees if there are no or minimal damages.

According to a Chronicle investigation, Airbnb lists over 5,459 destinations in San Francisco — growing 13.8 percent in the year despite many ceasing to rent their spaces during the same period.

Previously: It Looks Like We Will Be Voting On Changing The 'Airbnb Law' In November

via No on F

During the weekend closure of the Transbay Tube earlier this month, BART replaced some of the tracks in the tube itself that they say are responsible for the terrible screeching sound that we

As you may or may not be aware, the Sacramento-San Joaquin River Delta is made up of a series of levees, all of which protect a freshwater source that supplies water to two-thirds

—
Sue Thy Neighbor: Airbnb Stokes Fears Of 'Lawsuit Vigilantism' In Fight Against Prop F
Share this