Indeed, the Elbo Room was supposedly getting, er, booted out of the way for work on a condo development by mid-November. As Shapiro continues, "This came out of nowhere. As of yesterday we were told we needed to be completely out by November 9th."

Though many will be happy to spend just a little more time in the darkened bar, playing pinball or catching a show, the month-to-month reprieve might also appear to some as a game of kicking the can down the road.

The establishment's demise has seemed inevitable for more than a year, though Shapiro was "in shock" when building owners Dennis Ring and Susan Rokisky-Ring decided not to renew the bar and venue's lease this past April. Further, last November the couple-owners revealed that they'd like to themselves retire to the condos they envision — so yeah, for a number of reasons they're definitely going to push to make that happen. 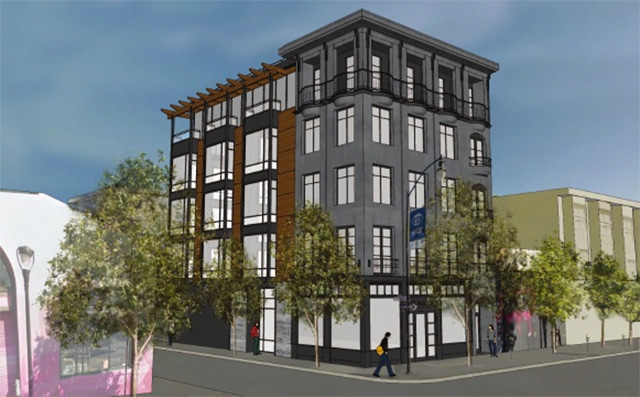 But it's also possible that something has happened with development plans — slowing or even derailing them — to cause the lease's extension. Previously, the architect Kerman Morris mentioned an ongoing Planning Department assessment from a hired historical consultant that could modify or outright derail the Rings' plans.

Shapiro has been pushing for just such an outcome for some time, a line of argument lent validity by the fact that there's supposedly been a bar at 674 Valencia since the end of Prohibition — examples being the Gaslight Rikki Streicher's lesbian bar Amelia's (whose sign the Elbo Room staff dusts off and hoists up during Pride season).

So it looks like, er, punches are still being thrown in the big Elbo Room fight! Certainly the bar is on the ropes, but it appears good for another few rounds. We'll keep you updated as we learn more.

Rendering of the condo building that will replace Elbo Room, via

Look at that grin! That's the terrifying mouth of a pacu, an omnivorous South American freshwater fish that's a cousin to the infamous piranha. And like their relative, they're usually found only in

When software engineer Rob Rhinehart wrote a blog post on the lengths he'd go to live "less wastefully", many corners of the internet reacted with anger, dismay, and concern — the Soylent creator seemed