While Gotham gets Batman and Metropolis has Superman, at long last San Francisco has a hunky crusader to call its own. That's Mr. Sunblock, whose archenemy is harmful ultraviolet radiation.

Okay, although this guy comes fully-equipped with sunscreen, an Amazon-purchased utility belt, and a hashtag, we're talking about an everyday sort of superhero. As the sun bore down on the Bay this weekend, Mr. Sunblock simply toted his sign and roamed Dolores Park, smiling, posing for photos, and of course spraying down park goers.

"For a few weeks I had been thinking about how I could be a better participant in Dolores Park," Mr. Sunblock tells SFist. After receiving a severe Dolores sunburn one day, Mr. Sunblock was born. His schtick started just before Pride weekend and has continued since.

"I love that [Dolores] has it's own micro economy," he says, invoking the park's existing cast of characters like Coconuts and Rum guy and Truffle Man. "We're all connected because we all see each other so much, so we're all rather friendly and exchange information on what's going on during a given day."

But, in a key distinction, Mr. Sunblock's services are free. "The first day I did it was on a Wednesday just to try it out," he explains. "I suggested a tip amount of $3, but one of the park rangers was like, 'you can't do that, you can't ask for tips.' I said, 'what if I do it for free?' He didn't object, and it's always been for free since," says Mr. Sunblock, who has been back every weekend and considers his project a kind of social experiment. 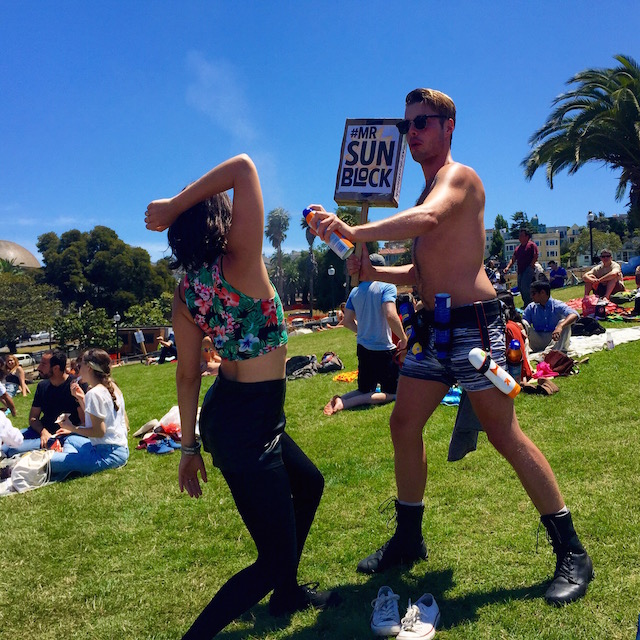 In terms of supplies, Mr. Sunblock usually carries three cans of spray suncreen and one bottle of regular cream sunscreen. Park goers can even request deluxe sunscreen treatment: "Usually people just want a quick spray, but sometimes they want the full rubdown," he says, clarifying that he'll only provide that given your consent.

So, when the sun comes out like his very own Bat signal (and he isn't railing against Karl the Fog's reign on Twitter) Mr. Sunblock can be seen on Saturday afternoons from 2 p.m. to 4 p.m. Yes, he's there more often than just that window, but he can't guarantee his presence. Yet never fear. Even if you've already gotten burned, this hero has something for that, too. "I carry a can of spray aloe," he says.

Related: The Funniest Reviews Of The Dolores Park Truffle Man On Yelp

Another week, another horror story about the sharing economy making a victim out of someone somewhere in the world. This time it's the story of 19-year-old Jacob Lopez who traveled to Madrid and

Until now, SoMa-based startup Elysium Space has been reaching for the stars. For $1,900, the company will arrange to have your loved one's cremated remains blasted into orbit as part of their