When you're in the middle of downtown shopping, or getting off BART/Muni in desperate need of a place to pee (since station bathrooms remain closed, pending some coming upgrades), this primer will likely come in handy. Scattered about the city are some fairly clean and pleasant places to relieve yourself that are free and open to the public  and these are not to be confused with bar and restaurant restrooms where, technically, you need to be a patron to use the facilities. Just remember, holding it for too long is bad for you.

Hyatt Regency Hotel
If you enter through the main entrance at Market and Drumm St., head straight back and you’ll find very nice bathrooms meant for the business conference guests. For a little visual treat, head upstairs and use the washrooms at the far back end of the atrium-level bar area (they’re located at the spot from where the above picture is taken.) Note that they still use paper towels instead if air dryers, whether you consider paper towels a senseless waste or a basic human right.
5 Embarcadero Center, on Drumm St. next to Market St. 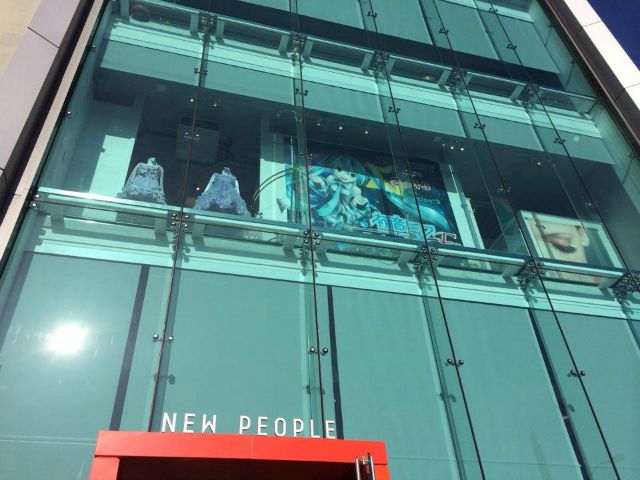 New People/Japantown
While the restrooms in the "main" Japantown mall are boringly American, across the street at the (almost always empty) New People you can get the full-on Japanese toilet experience. You can head up to 2F for a single occupant one with decor that got it named SF Weekly's Best Public Restroom at some point in the recent past, but the main floor bathroom also houses the glorious Toto Washlet, which will leave you fresh as when you left the factory. -- Eve Batey
1746 Post Street at Webster 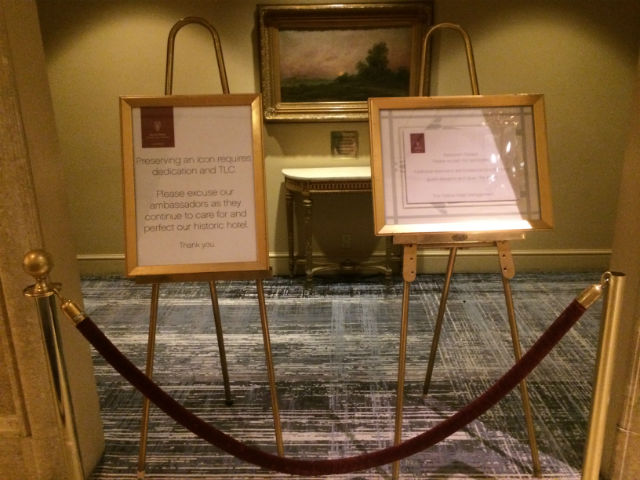 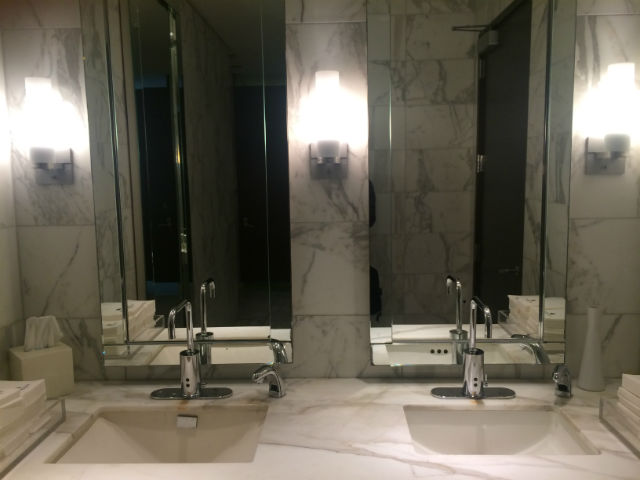 St. Regis San Francisco Hotel
The are some exquisite bathrooms next to the entrance of the Ame restaurant in the lobby of the St. Regis, with splendid marble sinks and no attendant to tip. There is also an opulent bar and sweepingly magnificent art to remind you how rich you’re not.
125 Third St., at Minna St. 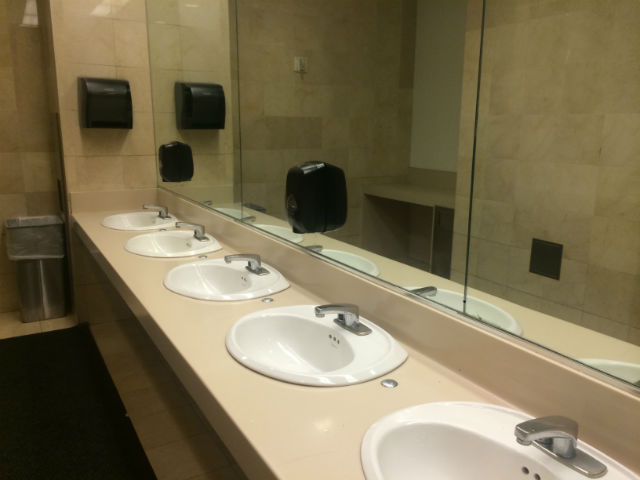 Macy’s
The old tried-and-true Macy’s downstairs food court bathrooms have come in handy in a pinch for San Franciscans across the socioeconomic spectrum. For less, umm, spectrum, head up to the sixth floor for larger but essentially exact-same washroom accommodations (it’s next to bedding and linens). Only the downstairs bathrooms have changing tables.
170 O’Farrell, between Powell St. and Stockton St. 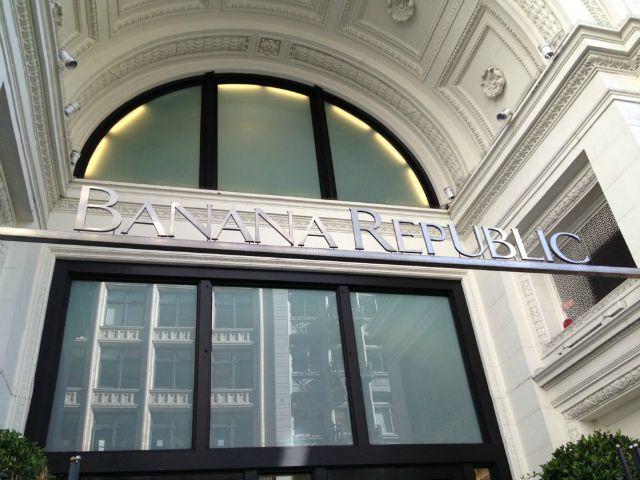 Walk in the side entrance, go on up to the woman's floor, and get some privacy. Photo: Chris M/Yelp

Banana Republic
I almost don't want to mention this place because it's one of the area's greatest hidden gems, but my concern over your excretory comfort is overriding my inherent selfishness. So! On the women's floor of the big Grant Avenue Banana, there's a roomy, wheelchair accessible single occupancy restroom that's always clean. Seriously, it's like Narnia, if Narnia were a bathroom (also, no talking animals). You have total privacy, and it's out of the way enough you won't have flocks of people knocking on the door the second you ascend to the throne. -- Eve Batey
256 Grant Avenue between Sutter and Tillman 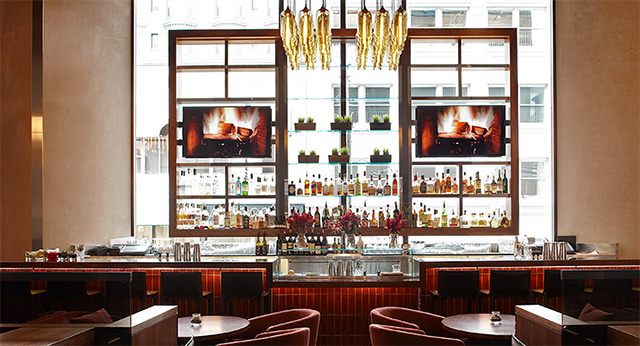 The OneUp bar on the second floor has a private facility to the left. Photo Courtesy of Hyatt

The Grand Hyatt
Another hotel lobby restroom that will help you out in a pinch is the newly remodeled facility on the entry level, past the swanky lounge area and check-in desk of the Grand Hyatt. Also, there's a private, one-stall, unisex restroom up one level in the OneUp bar, which you get to by going up the stairs, to the right, and through the long set of booze lockers. The restroom is immediately to the left as you enter the bar.  Jay Barmann
345 Stockton Street at Sutter 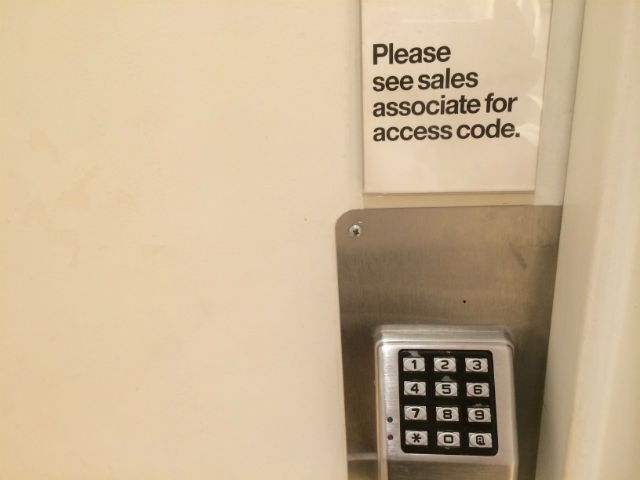 Crate & Barrel
These are not exactly public restrooms, people. You have to seem like you’re serious about buying serving baskets or table runners. And you have to ask the sales associate to provide you with the access code. And you have to say it like that.
55 Stockton St., at O’Farrell 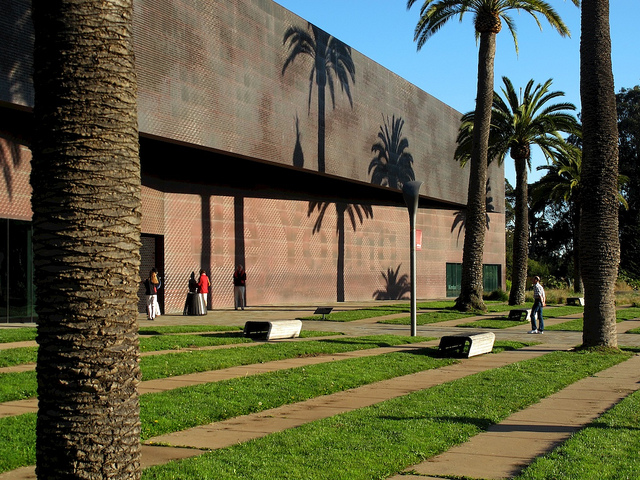 DeYoung Museum
Sometimes finding a restroom in Golden Gate Park isn't exactly a... piece of cake. But not only does the de Young have a pleasant, clean, and no-wait restroom on each floor, if you head to first floor The Kimball Education Gallery you can relieve yourself in a private "family" restroom that's bigger than your first apartment. —Caleb Pershan and Eve Batey
50 Hagiwara Tea Garden Drive 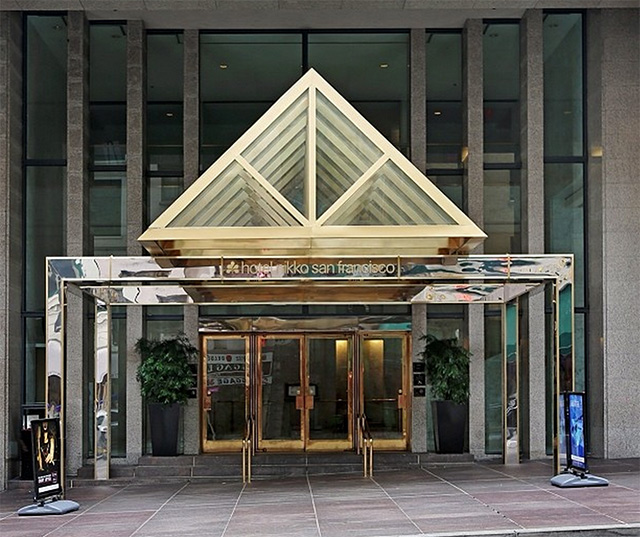 Hotel Nikko
Just to the left of the entrance to Feinstein's, in the second-story lobby, you'll find some well maintained restrooms lined in white marble. Added bonus: There's a little concession nearby where you can buy candy by the ounce for exorbitant prices.  Jay Barmann
222 Mason Street 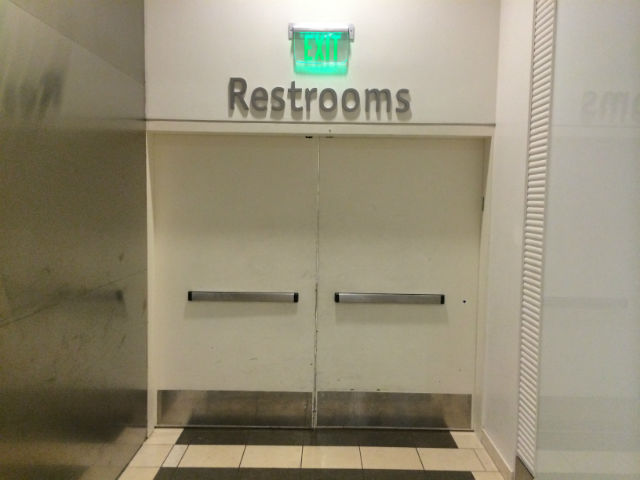 Westfield San Francisco Centre
There are pretty-good-for-public bathrooms right outside the Bloomingdale’s entrances on the second and fourth floors of the Westfield shopping center as well as in its basement-level food court. The basement level also has a ‘family lounge’, which as a childless Gen X-er I can only assume means a mixed-gender infant-and-toddler bathroom.
865 Market St., at Fifth St. 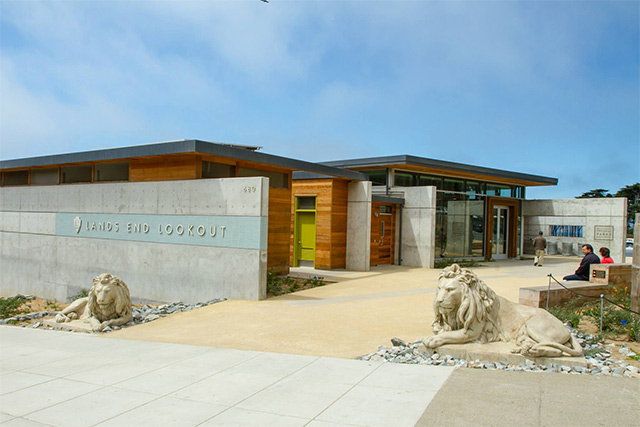 Lands End Lookout
If you're out by the ocean, one of the newest restrooms you'll find is at the Lands End Lookout Center. Like a lot of public restrooms in parks it may not always have been cleaned very recently, but the place can sometimes be pretty spotless, and in any event the views are lovely. From here you can hike the Lands End trails, or head over to the Cliff House for an overpriced drink.  Jay Barmann
680 Point Lobos Avenue

Photo of one of the refurbished Great Highway restrooms: SF Rec and Park

The Judah and La Playa "Comfort Station"
San Francisco famously spent $1.5 million to renovate this and one other restroom along Ocean Beach, and it shows — originally built in the 1930s, the Classical Revival structure was painstakingly revamped earlier this year, and reopened in May. The interior is roomy and easily hosed-down, but forget about mirrors: this bathroom doesn't have 'em. I'm sure you look fine, though. -- Eve Batey
Judah and La Playa 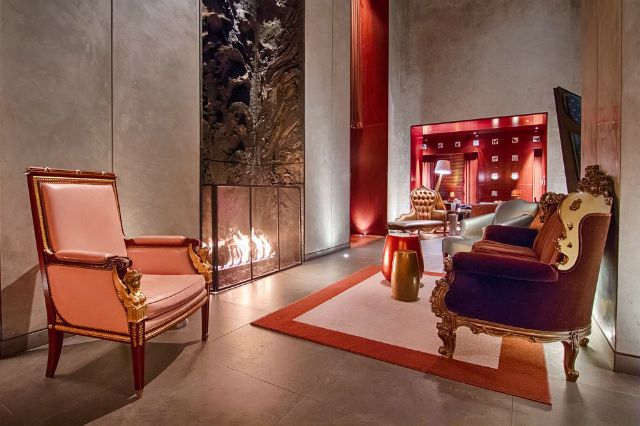 The Clift Hotel
Yeah, Phillipe Stark's whole thing is kind of dated, but you're looking for a place to drop a load, not shoot a Dwell cover, right? This washroom is easy to find, down a hallway just off the side entrance to the hotel. Inside, you'll find excellent lighting that's spurred many a selfie, and stall walls that run all the way to the floor (a personal preference of mine). -- Eve Batey
495 Geary Street at Taylor 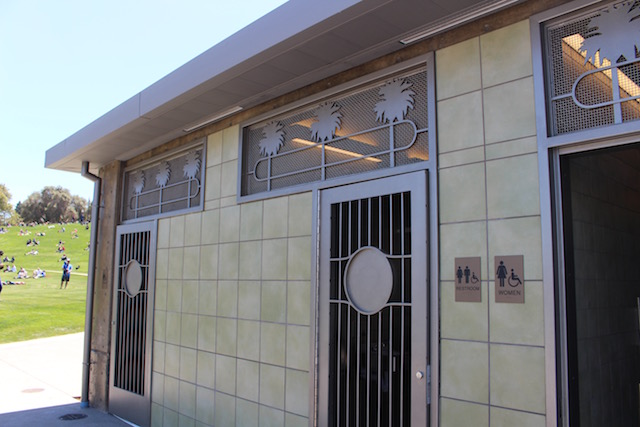 Dolores Park
Call it "Dolo," dub it, "DP" or insist that anyone who would do so is the human equivalent of the trash that piles up there. But San Francisco's most hyped park — or at least its freshly renovated northern half — is back in action. What's more, those disgustoid restrooms of yore have been given an overhaul, and the park's now sporting a new set of deluxe facilities in varieties like men's, women's, and now, gender neutral. Gleaming fixtures provide a state-of-the-art experience, so get in there before the toilet bowls lose their shine. After all, nothing gold can stay. —Caleb Pershan
18th and Church Street

Coit Tower
A beacon on the San Francisco’s skyline since its completion in 1933, Coit Tower is also a symbol of hope for those who need to relieve themselves. The fluted tower, although named for a patron of the city’s firefighters — Lillie Hitchcock Coit, who is usually described as wealthy eccentric — is actually not designed to resemble a firehose nozzle. And after a hike up the Filbert Street steps to admire it, you'll probably need a pitstop. Near the tower's base you'll find just that in a "Touch of Paris" self-cleaning toilet. —Caleb Pershan
1 Telegraph Hill Blvd

Front cleansing? Rear cleansing? Why not both, at the New People. Photo: Gekiyasu/Foursquare

It's been a full year since the "suspicious death" of 31-year-old Bryan Higgins a.k.a. Feather Lynn on Church Street, and six months since police said they had identified a person of