The massive Trinity Place development was pushed through the city's bureaucracy over many years, through many fights, by 90-year-old local powerhouse developer Angelo Sangiacomo. When complete it will ultimately contain 1900 units of housing, and it was approved in part because Sangiacomo agreed not only to house all the tenants who previously lived in the dilapidated Trinity Plaza complex on the property, but also because he agreed to include 500 affordable, below-market units on-site. (Had the project been going through planning now, that number would probably be even higher.)

Of that 500, 360 units were designated as rent-controlled, and intended to house the former Trinity Plaza residents at rates similar to what they were paying before. However now that about two-thirds of the new Trinity Place has been built and occupied, City Attorney Dennis Herrera says he's now investigating a report that at least 23 of those units are being leased to a single entity, dubbed The SOMA Suites Hotel. That outfit is renting all those units in two of the buildings, 1188 Mission Street and 1190 Mission Street, on a short-term basis, as tourist rentals.

“For those of us who worked on the agreement [with Sangiacomo], the full promise of Trinity Place wasn’t solely about 1,900 units of badly needed housing,” Herrera said in a statement. “It was also about proving that developers, city officials and the community could resolve differences creatively, and rise to the challenge of our housing shortage. What makes this apparent misuse so disappointing is that it betrays that promise on both counts."

Herrera’s office has submitted a letter to Sangiacomo and his agents requesting "full cooperation" and "to thoroughly account for the uses of the rent controlled units and other residential units authorized under the Trinity Place development agreement since its execution."

Once again, when developers promise below-market-rate units, they apparently need to be policed into doing it properly.

The completed Trinity Place as it was rendered in 2012 is below, however I'm told the buildings won't have those cut-outs anymore. 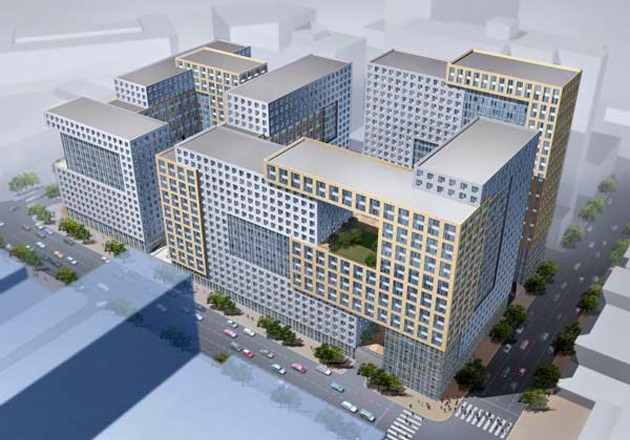 A rendering of the completed Trinity Place. The two towers at the rear are the only ones out of the ground right now, with the one at rear left, facing Mission, the only one complete and inhabited.

27-year-old Terrie Vaiasaga Elzie who pleaded no contest to felony assault in that Nordstrom Rack beatdown of that hipster girl who told her to quiet her child is getting four months in jail.