Just a week after it was reported that venture capitalists were putting more money into startups than ever before, we're hearing that VCs might now be having second thoughts on the matter, and are "increasingly concerned about making bets." Oh, VCs, you fickle creatures!

The Chron reports that for the second quarter in a row, venture capitalists' confidence took a dip, suggesting that the party might be starting to wind down.

This is based on the Silicon Valley Venture Capitalist Confidence Index, a report published on a quarterly basis by the University of San Francisco that "measures and reports the opinions of professional venture capitalists in their estimation of the highgrowth venture entrepreneurial environment in the San Francisco Bay Area over the next 6 - 18 months." (You can read the entire report here.)

According to the report released today, the surveyed VCs' confidence clocked in at 3.7 on a five-point scale. That's a drop from last quarter's 3.8, and marks "a two-year low."

The report's been running on a quarterly basis since 2004, so we don't have a set of dot com bubble 1.0 numbers with which to compare. The Chron reports, however, that per the survey "confidence hit an all-time high of 4.4 in the first quarter of 2007. It bottomed out at 2.8 in the fourth quarter of 2008 — just months before the public markets tanked in the beginning of the recession."

We're a long way from 2.8, but USF prof Mark Cannice says that what we're seeing these days is that "venture capitalists are increasingly concerned about high valuations." 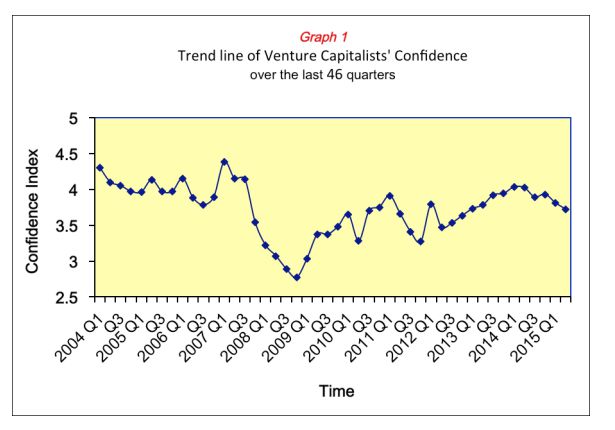 One of those VCs is Bob Ackerman of Allegis Capital, who responded to the USF survey saying “The unprecedented fund raising and valuations associated with so called ‘Unicorns’ and the knock-on effects for the venture ecosystem in terms of broader market expectations around valuations, compensation, and all aspects of the costs of doing business for venture companies gives reason for substantial pause."

One of the problems, Dag Syrrist of Vision Capital said, might be the companies themselves. He finds it "puzzling how fewer start-ups are actually tackling hard problems with actual innovation and technology."

"Competing on round size and valuation metrics with no intrinsic value...will by definition end badly for many if not most."

Every August, Bon Appétit releases their highly influential Best New Restaurants list, which is always 10 names long and generally comes with the promise of immediate tourist crowds  as it did three years

So, you're visiting another city, and you see a fence with not one, but two signs warning people not to pass its boundaries or risk injury and/or fines. Would your first instinct