In a widely publicized protest, the cyclist activists of "The Wigg Party" snarled traffic yesterday on their eponymous route, The Wiggle.

Emphasizing their objection to the letter of the law, hundreds of bicycle commuters staged a "stop-in," coming fully to a halt at each posted sign in order to contest a requirement that they do so.

"We think it's ludicrous that SFPD Park Station is diverting precious resources towards trying to make sure every cyclist comes to a full and complete stop at every stop sign," the group wrote of the event.

Instead, the Wigg Party was agitating for the legality of an "Idaho Stop," a rolling yield that might more accurately be called an "Idaho Go." Regardless, the maneuver has been the subject of a reported Park Station crackdown, prompting the protest. 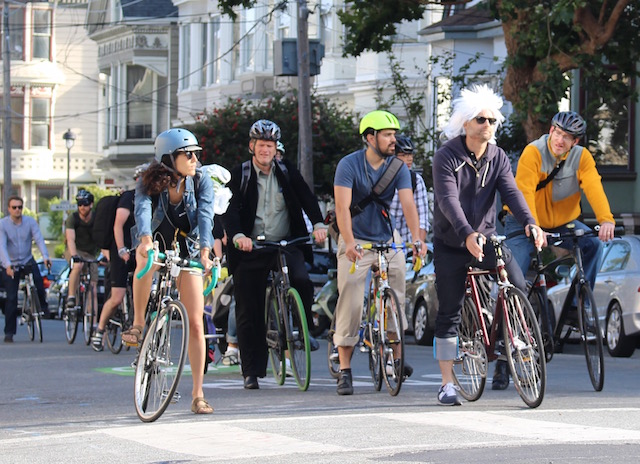 Just in time for rush hour shortly after 5:30 p.m. on Wednesday, "stop-in" participants rode single file, as if each bike were a car, taking turns to proceed one by one through intersections.

It was that particular tactic that halted traffic, with some drivers waiting behind a line of nearly a hundred cyclists at one intersection. A few frustrated motorists even pulled around the line.

“We’ve heard they’re going to obey the law en masse,” Officer Grace Gatpandan told the Chronicle. “We welcome any demonstration where people are going to be obeying the law.” Though police presence was notably light, at one point a cruiser rolling by announced over their loudspeakers “Thank you for obeying the law,” drawing cheers. 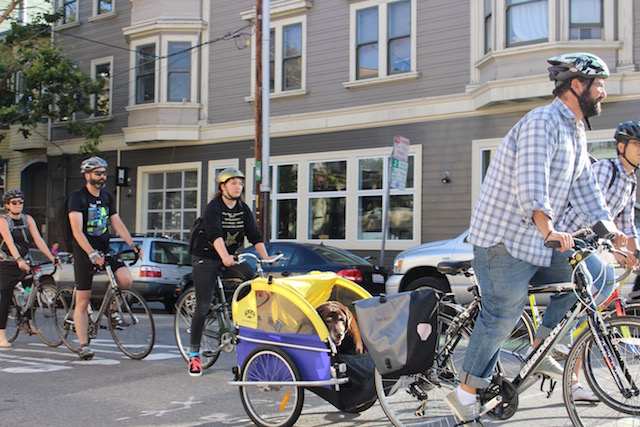 However, police have not mandated that cyclists move through intersections in a single-file, one-at-a-time manner. As the Wigg Party ably demonstrated, doing so, effectively treating cars and bikes as exactly alike, leads to traffic nightmares for all parties. The point extends to the Wigg Party's platform, which is to say treating cyclists and cars as separate entities, with cyclists allowed to perform the Idaho Stop. Incidentally, if left up to Mayor Lee, that wouldn't fly. As Streetsblog registers his comment:

We’re a great city for First Amendment voices. I’m willing to listen to them. But I’m going to always say everybody’s safety has to be the number one priority. I’m not going to be bending to interests that simply want to disregard public safety. That’s not what our city should be doing.

The Wigg Party's argument is that SFPD’s Park Station captain is ignoring safety data to focus on the wrong issues. Driver violations, they point out, hurt the most people and frequently go unenforced. By using resources to ticket cyclists who don't stop at signs throughout the Wiggle, police are disinvesting in more pressing concerns. 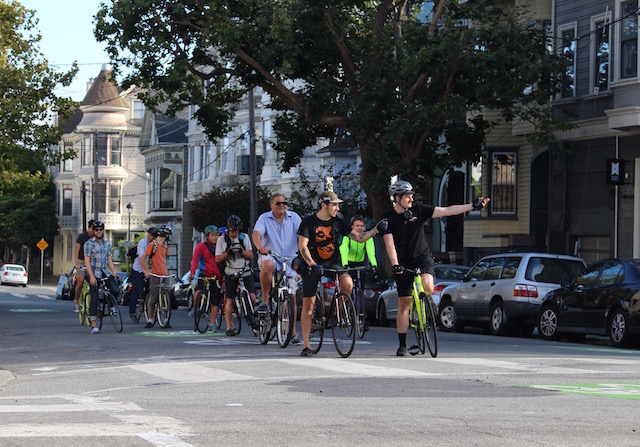 The Stop-In registered strongly with local media. TV news crews stalked the streets in large vans, while reporters and bystanders shot photos. Clearly the exaggerated, slow-motion tactics of the demonstration were behind its popularity.

But the message was also mixed. By ironically following laws that police are enforcing — stopping at signs — while also adhering to ones that don't quite exist and certainly aren't being enforced — riding single-file — the Wigg Party also, arguably, weakened the party line.

SFist is seeking a full-time blogger with solid editing skills, news instincts, and a touch of wit who can cover a range of topics, from hard news to arts and food. This is

A wildfire to our north in Lake County that broke out Wednesday afternoon quickly spread to burn 8,000 acres of trees and brush. It's called the Rocky Fire, and the Chron reports