San Francisco may not be the stronghold of public nudity it once was thanks to the bowdlerization efforts of a certain Supervisor. But try telling that to the cyclists signed up on Facebook to ride — in the nude — across San Francisco tomorrow morning.

As the Weekly notes, the event is part of a network of such rides taking place across 20 countries. The World Naked Bikeride, as it's known, has been held annually for 11 years and serves as an eye-popping protest of fossil fuel dependence. According to the event, this is the fourth year it's been held in San Francisco.

Nudity, of course, is strictly forbidden except at "certain permitted events." This is a protest, and permit or not it sounds like it's going down, but it also seems like the event is indeed permitted, at least in some capacity.

In the past, we used to meet in Justin Herman Plaza. However an issue regarding Permits and the National Park Police brought about the need for an alternate meeting spot and we were there at our new Ferry Building location in June with even much better response from the public... Please remained dressed until we have sufficient numbers of riders and are near the time we will ride. Bring body paints, watercolors and markers to apply slogans and designs to each other and adorn your bikes with signs; meet with old and new friends.

Here's a link to the route on Google Maps, and also an image of it. 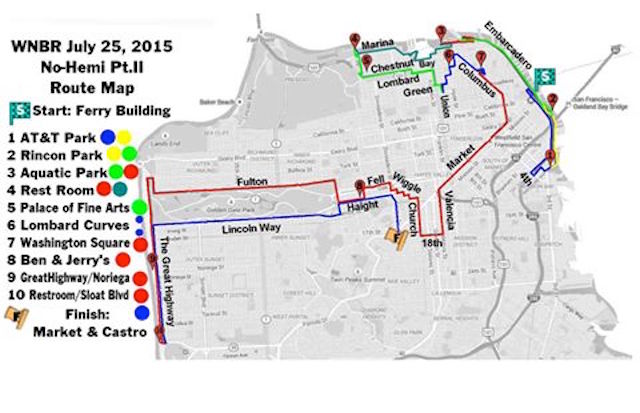 And, in case you want to relive the magic from last year, we've got the NSFW photos you require.

Have a safe ride, everyone! Wear helmets mmkay?

This week's food news was pretty rich, between the closing announcement from Urchin Bistrot, the important update on Wise Sons Bagel, the taker for the Abbot's Cellar space, and our discovery of ShakeDown

Yes, there has been an increase in shark sightings along the California coast of late, possibly due to the coming El Niño, as the Chron recently reported  marine wildlife anomalies tend to happen,

—
Here's The Route For Tomorrow's Naked Bike Ride: Seek Or Avoid It As You Please
Share this