According to the latest and perhaps last tweet from Leap Transit, the private bus startup is still "offline to deal with a regulatory issue." To get technical, Leap received a "Cease and Desist" letter from the Public Utilities Commission just before the tweet, in May.

Anyway, while the company settles that in no time, it's definitely "pivoting." Three of its four or five bright blue, Wi-Fi equipped vehicles were last seen up for auction last month. Possibly they weren't hot items, as one of them is now being sold as a "party bus" on eBay for $17,999.

While some might see this as an act of desperation on the part of a company laid low, it's definitely possible that the bus was already purchased at auction and is now being resold. Regardless, the vehicle is a surefire investment, not cursed in the slightest by its previous ownership. "[c]ome see this money maker!!!!" reads the eBay ad. 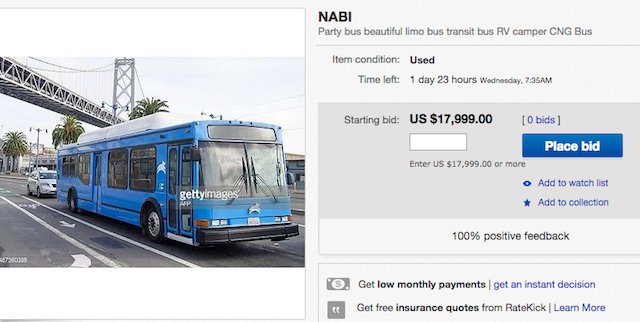 Leap's NABI buses were themselves bought used at auction sometime before the company's most recent of two disaster launches. Though the vehicles were certainly built as wheelchair accessible and allegedly bought that way by Leap, by the time the startup's fleet hit the streets, Leap buses had a cool new look with plenty of bar seating and no wheelchair ramps.

A month later, Leap had an ADA suit on its hands. For the company's part, it claimed that as a technology something or other and definitely “not a transportation carrier” it was exempt from that sort of legal thing. Still, Leap CEO Kyle Kirchoff had something to say. "We're sorry to anyone we've offended and we hope to do a better job next time," he Silicon Valley apologized, and soon at least one bus was made accessible.

But by May it came out that Leap was operating in a sort of regulatory limbo. While it waited for approval on a final permit to expand outside of San Francisco — which would have subjected the company to looser California regulations instead of stricter San Francisco ones — the PUC and the City couldn't agree on who was in charge of Leap.

A few days later, just as the company introduced a discount from $6 to $2 per ride to increase what anecdotally was terribly low ridership, the PUC ponied up that cease-and-desist. Customers along Leap's sole route between the Marina and the Financial District were left stranded.

Leap hasn't been officially pronounced dead because Kirchoff hasn't released a Medium essay about how he piddled away $2.5 million in investments from the likes of Andreessen Horowitz and Marc Benioff. And some say that on particularly foggy nights in San Francisco you can still see a single blue Leap bus, empty save for coffee and juice, gliding down Lombard Street like a ghost ship.

Update: As noted in the comments you can also pay to $29,500 outright for what looks to be the same bus on Craigslist.

All SFist coverage of Leap (so far!)

The third "under-developed" corner of Van Ness and Market, a city-owned office building at 30 Van Ness that's currently home to a Walgreen's and the Department of Public Works, is now slated to