The Presidio Trust says it has received four reports of mountain lion sightings in San Francisco in the past several days. All sightings are believed to be of the same animal.

Three times a mountain lion was reportedly spotted by a member of the public, unconfirmed by experts. But one of the sightings was captured by a neighborhood security camera, featured above, and "clearly shows an adult mountain lion" according to the Presidio Trust.

The first sightings were on June 30th in Sea Cliff and the western Presidio. The next were in the 1000 block of Gough Street on July 1st, and after that, in southwest San Francisco near Lake Merced on July 3rd.

For reference, here's what a captive adult mountain lion looks like: 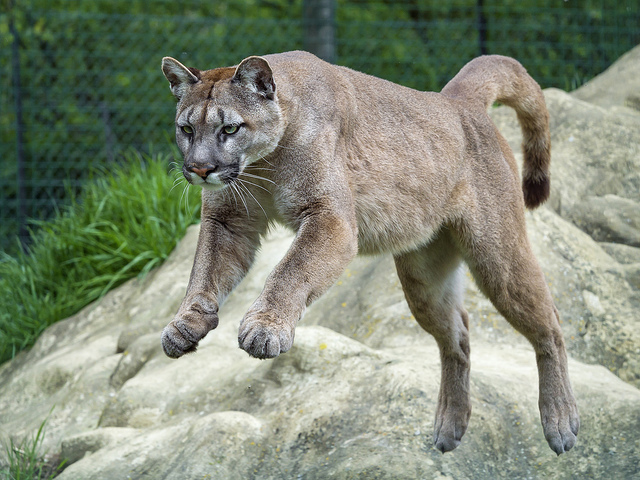 The animal appeared to have been headed south and hasn't been spotted since the third. It's common for mountain lions to be seen in undeveloped areas of Marin and San Mateo, but in San Francisco, such sightings are rare and haven't occurred in years. In past epochs, the sightings might be taken as a really bad sign, or in literature and art used as an example of deep societal confusion. In Shakespeare's Julius Caesar, when things are going all to hell, one character spots a lion roaming the streets,

Besides—I ha' not since put up my sword—
Against the Capitol I met a lion,
Who glared upon me and went surly by,
Without annoying me.

Weird, right? As the character notes, though, mountain lions are naturally wary of humans and encounters between people and the animals are very rare.

If the mountain lion appears threatening:

Dusk and dawn are times to be particularly wary, and its a good idea to keep animals on leashes at all times. To report a sighting, which assists the Presidio Trust in their efforts to respond in coordination with California Fish and Wildlife, contact the following:

The sad and bizarre case of the random shooting of a San Francisco woman by a transient Mexican man in the US without documentation has taken an even stranger twist, at the news

—
Multiple Mountain Lion Sightings On Streets Of SF
Share this