Doing what they do best, on Friday, Redditors and moderators formed a mob, shutting down parts of the site in protest.

The given "reason" for the tantrum was the firing of Victoria Taylor, a beloved employee and AMA coordinator who acted as a literal pacifier on the site. Fast Company described the misstep as Reddit firing the person "trying to save it." Predictably, many Redditors began to shriek and cry.

Quickly, users directed their outrage toward the nearest woman, as is customary, while also shaming the site's corporate leadership. In this case that was a "two birds with one stone" maneuver that meant going after CEO Ellen Pao. Soon, Reddit's front page became what Gawker called a "Pao-themed virtual guillotine." A petition for her removal as CEO on change.org had gathered around 190,000 signatures as of this writing, though Advance Publications, Reddit's owner, is under no obligation to respond to the petition. 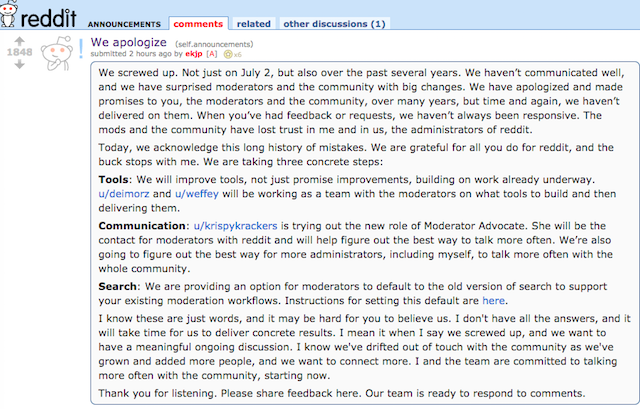 Pao, as you likely know, first entered the mainstream media in her landmark though failed gender discrimination lawsuit against VC firm Kleiner Perkins. The suit was actually ongoing when she was hired at Reddit, as Business Insider noted at the time. Of course, it's unlikely that Pao's attempts to call out misogyny have endeared her to the mostly male Redditor community as she continues to get "massively downvoted" by them.

As one self-described male user summed things up: 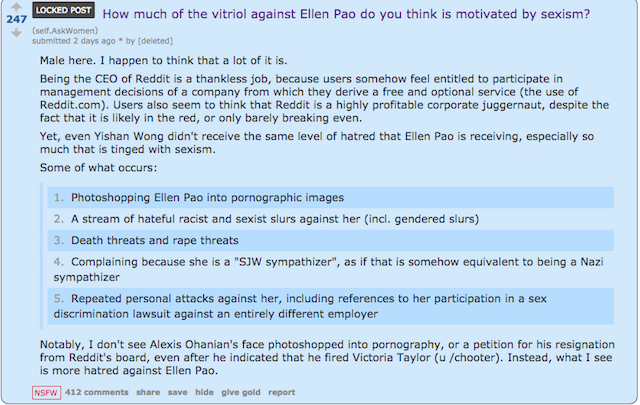 Naturally, the user was quickly menaced with pitchforks or something, because that account has been deleted.

Last, and for reference: The most recent Reddit revolt took place just weeks ago, when as BuzzFeed reports, Redditors expressed outrage over the banning of "communities" such as "Fat People Hate."

A quick update in the wine theft case that rocked the food world back in December: As mustache twins Matier & Ross report, the thieves responsible, and the wealthy wine collector in North

The story of the tragic collapse of that balcony on June 16 in Berkeley proceeds on, and as it turns out, the Pleasanton-based company Segue Construction that built the arguably faulty balconies on