For a moment, it looked like the Robert Dance Party was over.

This past Saturday, park rangers were booed in Dolores Park's newly reopened northern half as they forced out folk icon Chris Hirst, clad in his shiny silver dancing armor. There to celebrate the first weekend on the fresh green grass, once Hirst had attracted his usual crowd he was told that he and his amplified sound suit had to go.

SFist snagged a picture of the perp walk, a moment that led Uptown Almanac to emphasize the "culture shift"that's so far greeted park-goers. 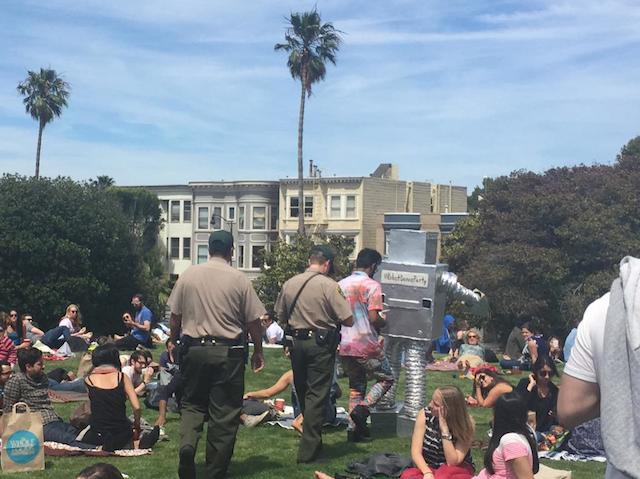 "The thing is that there's tons of amplified sound," Hirst tells SFist while making clear that he thinks "everyone's heart is in the right place" and that rangers are just setting a careful tone for starters. But the performer does suspect he wasn't welcome in the park "just because I was a spectacle."

As Hirst explains, "my [sound] radius is maybe 20 to 30 feet and I'm constantly moving, I'm looking for dancers. I've had a bunch of times where people have politely asked me to move, they don't yell at me, they just tell me to move, and I just keep walking."

Robot Dance Party isn't mad about getting the boot — "There is no pending robot wars," he reassures us all. But he's going to be careful and not head back to Dolores without some kind of a permit. That's a shame, because to Hirst, that park is "very much like my home. I started going there in 2010 before I lived in the city. When I first decided to bring the robot to San Francisco, Dolores park is where i decided to take it."

Hirst's robot was first developed for Burning Man and provides him with a complementary experience to his 9-5 admin work in the Financial District. He also shares with SFist the excellent news that he's hard at work on a SECOND ROBOT SUIT(!).

So, as Robot Dance Party works with the park for a permit, perhaps we can look forward to him doubling down, not shutting down.

Previously: The Funniest Reviews Of The Dolores Park Truffle Man On Yelp

The saga of the cracked bolts on the Bay Bridge's two-year-old eastern span continues as experts testified Tuesday at a bridge oversight panel meeting. Even though there was a minor bit of good

"Ran into the devil, babe, he loaned me twenty bills," is a lyric from the timeless Grateful Dead tune "Friend Of The Devil" that also approximates the current cost of seeing the band