You know you have a right to a kitchen, right? Yeah, even if it's just a sink and a hotplate and a mini-fridge, that's what's required to exist in a legally rentable unit. But as we've seen multiple times before in this column, there are a lot of landlords out there who are like "Fuck it. It's a converted garage with no plumbing, what do you want from me. Give me a thousand dollars."

Today's edition brings us over to the Portola District, where a landlord has created an illegal in-law out of something, some odd little section of home with a couple high windows, and it basically looks like you'll be living in The Shoe from Orange Is the New Black. 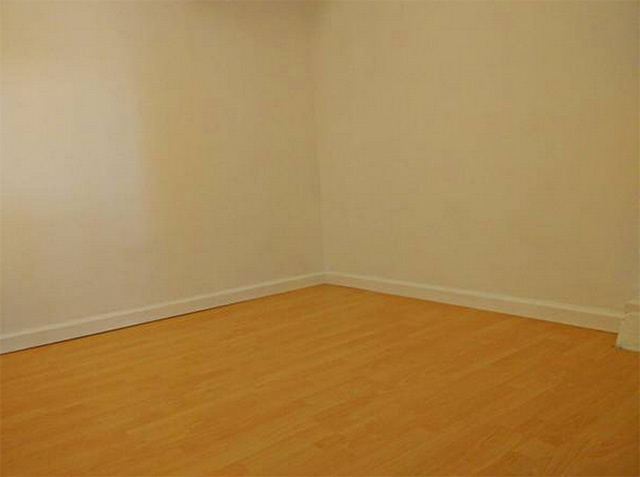 Those are indeed two walls. And there is a pergo/wood laminate floor that may be newly installed, shortly after this landlord realized they could make an extra $1050 a month renting out this converted garage, or whatever it is, to some desperate sucker who doesn't mind living in Portola because it's near the 280.

Here's a third wall, with an oddly high window. 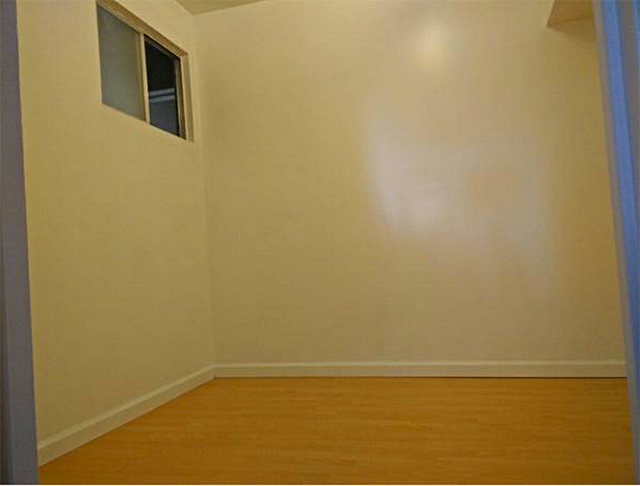 The Craigslist ad is quick to call this a "cozy 1 bedroom," and you know why it's a one-bedroom and not a studio? Because there's a second room! Yes, you can see the second room in the top photo above, and in the photo below.

It has tile. It's tiled because maybe they were thinking about building a kitchen? And then they either ran out of money or decided it was too much trouble.

Yeah cause who needs a kitchen? 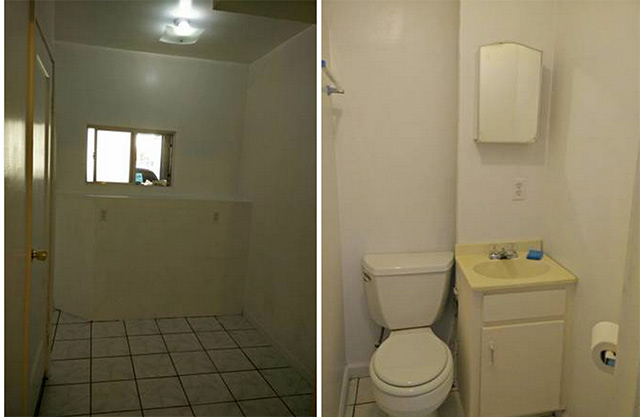 There's some kind of awkwardly high counter/shelf in the not-kitchen where you could put your hot plate, and since it's tiled you could spill things here, get yourself a little butcher block island perhaps, and fend for yourself when it comes to a fridge. What do you expect for $1050?

Amenities listed include "1 full bathroom, 1 full bedroom" and "1 full living room." It beats me which is which. Is the tiled room supposed to be this "living room"? Oh, and there's free wifi!!

There is no evidence in the bathroom photo of a shower or bathtub, so it might not be what's called in real estate parlance a "full bathroom." It may just be a half bath where you're expected to have a whore's bath in the sink with a sponge, and to consider your life choices while doing so.

Also, they know you must be poor if you're still reading this ad, because they mention the proximity of the Foods Co. Also, they say, "no pets or section 8(no section 8 qualification)," so they're really only expecting the very poor and desperate to apply anyway. And you know why it doesn't even qualify for Section 8? Because there's no kitchen!!

They would also prefer that you're not a smoker or a drug user, but do they really expect only squeaky clean angels to come checking this place out? It is, like so many apartments I've shared with you these past few months, fit for a serial killer or at the very least a petty thief on probation.

But hey  it's better than living in a truck! And only $250 more a month. That's, like, what, a couple handjobs under the freeway?

Supervisor David Campos was on a KQED radio program recently discussing the proposed moratorium on market-rate housing development in the Mission  Scott Wiener was on the program too, arguing the con side. And

Following a city law introduced by Supervisor David Campos and adopted last year by the Board of Supervisors, landlords are for the first time reporting tenant buyout agreements to the Rent Board. That's