When you enter Mike Beitiks' website, iwillnotdonothing.org, you see that his message is simple. He wants us to live.

"ISIS. Obamacare. Russia. The NSA. Wealth disparity. Immigration reform. Gun control. What do all of these hot issues for the 2016 election have in common? None of them matter because we’re all going to die."

Beitiks, a San Francisco native, isn't a nihilist. He thinks something can be done, and he's serious about his issue. There's just one, and it's climate change.

"I am not kidding," he writes, both of the threat and his candidacy. "If elected, I vow to address global warming like a human being with basic reasoning and any sense of proportion." 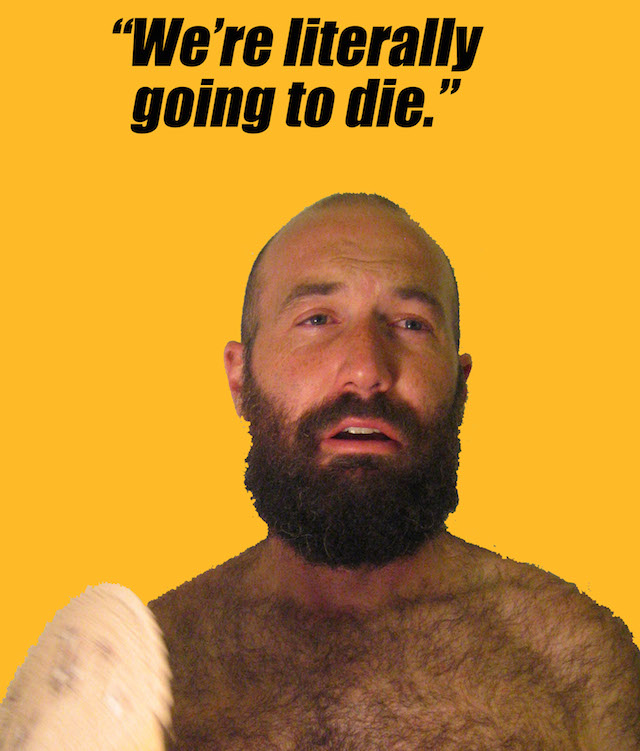 Beitiks is legally eligible to run, though not officially registered at the moment as he explains in an interview with the Awl. When asked if he's an extremist, he admits, "There is obviously a certain level of absurdity in the way I present myself. But I consider that to be an equal and opposite reaction to what I see as the absurdity of, for example, the Keystone XL pipeline debate." To even consider further reliance on fossil fuels is equally absurd, he explains.

"We exist in a political climate where it’s not okay to treat Americans as adults who understand responsibility," says Beitiks. "No politician is willing to look us all in the eye and say, 'Hey, we’re in bad shape. Let me tell you the truth and let’s do what is necessary.'" Well, here's one who will look you in the eye and tell you about the possibility of human extinction.

"Please vote for me," he implores in his promotional material, "If for no other reason, then at least so we don’t all die." Well, that's blunt.

Beitiks' first campaign video is as tonally fascinating as you would expect.

A photo posted by Sarah Blackwood (@thesarahblackwood) on Jun 12, 2014 at 11:29am PDT Sarah Blackwood, an Ontario-based musician and mom to 2-year-old Giorgio, was just trying to fly from San Francisco

Good god. So, next week is Negroni Week, which after launching in 2013 has grown into an international affair with over 1300 bars and restaurants participating. Here in SF you can taste Negroni