In a case in which it appears Twitter had a not-so-strict screening method for a paid advertisement, several promoted tweets were allowed through the system from a fake account that expressed hatred toward transgender people and encouraged them commit suicide. The account purported to be that of Australian feminist Caitlin Roper (it was named @caitlin_roperr), and the prank was perhaps directed at Roper herself, however it's caused outrage that apparently Twitter accepted $25 apiece for the offending tweets to be "promoted" across the platform.

As The Guardian reports, the offending tweets were pulled and the account suspended "within hours" of complaints about it, however it remains unclear how they hadn't been screened or filtered for hate speech in the first place.

And, apparently, this is not the first time Roper has been targeted and had her account cloned in order for one of her enemies to write hateful things on her behalf.

For Twitter's part, all they've said is, "As soon as we were made aware, we removed the ad and suspended the account.”

This comes three months after The Guardian posted a leaked memo from Twitter CEO Dick Costolo in which he admitted the company "sucks at dealing with abuse and trolls on the platform, and we've sucked at it for years."

See screencaps of two of the offending promoted tweets below. 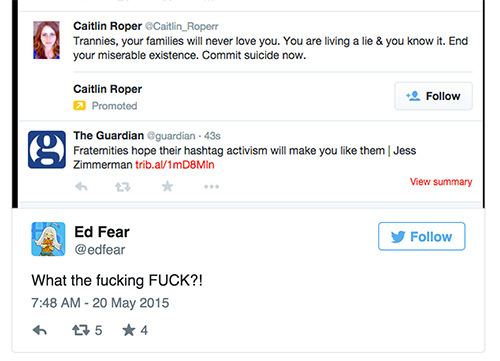 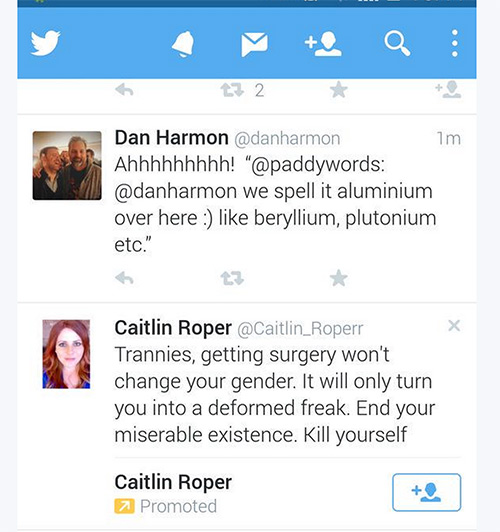 As they face another protest on June 1 by the LGBT community, Facebook has issued yet another statement talking around the issue of their "authentic names policy," suggesting vaguely that they've been adjusting

"One of the largest estates in Silicon Valley with everything you need to live and launch your greatest ambitions." That description of the place called Startup Castle in Woodside might be more accurate