An interview with pianist Stephen Hough and a review of Opera Parallele's US premiere of composer Tarik O'Regan's Heart of Darkness.

British pianist Stephen Hough performs tonight a recital of Debussy and Chopin presented by SF Performances. A frequent visitor on this shore, Stephen has played half a dozen recitals here, and has appeared about as many times with the SF Symphony, which he'll join next February in Saint-Saens' piano concerto #5, Egyptian. Stephen is famous for being the first classical musician ever to receive a McArthur genius grant in 2001, for being openly gay and Catholic, for having a painting exhibit in London, and for writing an entertaining blog for the Telegraph. Most of these accomplishments don't help playing the trills or arpeggios, but do make for an inquisitive and creative interpretation of the music. Stephen talked to us from New York City, where he lives several months each year.

SFist: Your program will feature Chopin and Debussy. In a blog post describing the program, you wrote that Chopin was a classicist and Debussy a modernist. Could you elaborate?
Stephen: There were both Romantic composers, but Chopin is always concerned with form. He does not like excesses, he's dismissive of the crazy things that were going on at his time. He favored composers like Bach or Mozart and focused on the structure of the pieces, as a vehicle for passion and great expression. The Ballades illustrate this perfectly. Debussy is a romantic, as an individual who expresses emotion. But he's looking to modernize. Things happen in the moment. You ask yourself: is there a reason for this? There is no reason.

Is Chopin still influenced by the classical style, and the sonata form?
Stephen: There is something in the first and fourth ballade that are related to classical sonata form indeed. It's not as explicit, you just sense it. There is a first subject, a second subject, you don't exactly have arecapitulation, but you just have someone who's very attentive to the beauty of structure. It's like in a building or a novel. When you read certain writer, you get this sense of proportion. What happens at this point happens there, you look at it and you see a unity. These ballades, none is more than ten minutes, yet you listen to something much bigger in its structure. Debussy does not write with this unity in the classical sense. Of course, he has a unity of the idea. He's definitely not writing sonatas. In "Evening in Grenada," he's creating an atmosphere. And part of creating this is taking unexpected turns, cutting and pasting in random order. He paints a sultry evening, you feel the heat and smell the perfume of Andalusia. Then come in two bars of guitar playing, and it's quite clear Debussy means a guitar just being heard. He's creating an atmosphere. It's unthinkable of Chopin to throw such changes of mood and deliberate distortion. It's very modern, something that ushers in the 20th century. Debussy works a little bit like a movie: He will splice things together in unusual combination. Whereas Chopin goes from the beginning to end in one piece.

Listening to your piano arrangement of "My Favorite Things" , we hear the shimmery arpeggios of Debussy or the voice leading of Chopin.

Stephen: I supposed that's true in a way. These two composers are the quintessential composers for the piano. Chopin began everything for the modern piano, of course. Anyone writing will have some echo of both of them. Whoever invented the wheel, all of us need to pay homage to the man or the woman, we can't do without them. Those were 30 years ago. Lots has happened since. For the last several years, I've been writing more seriously, 3 piano sonatas, song cycles, masses, orchestral version of mass released. I was doing those transcriptions, I had began in my 20s, I didn't have time to compose. I was just writing small transcriptions. Now the cello concerto is out, the cello sonata is coming out this month. It's written for Steven Isserlis who is a very good friend."

What did you do with the McArthur genius prize money?
Stephen: I made a studio for myself in London where I can practice. It's something that will be useful to me for the rest of my life. Those of us that live in cities like San Francisco, New York, or London, there are always neighbors involved." But shouldn't they be happy to have a world class musician playing next door? "I don't like to know that the people can hear. Just like if you're writing words, you don't want someone reading over your shoulder. I find it very intimidating. Every single second of a piece, every sound, pedaling, rubato, texture, nuance, all this needs to be experimented with. Practicing is experimenting. and seeing where the music will go, discovering how you will sing that piece."

Like Jeremy Denk (another McArthur genius/pianist/writer!), you seem to enjoy writing about the music and to provide intellectual insights. Is it a requirement to understand the music in that intellectual dimension?
Stephen: The most emotional pianist ever was Alfred Cortot, a 20th century pianist. When Horowitz went to study with him, Cortot asked him for every piece, to bring a written analysis. Every piece! Many of us would not be so sure of how to do this. So that emotion and analysis can't go together is not really true. The more you understand where the harmonic tension are happening, the more you can bring out that emotion. If you don't, you might miss a lot of deeper emotion, especially talking about Chopin, Brahms. Intuition is very important of course, you can't be a brain box and play music, music goes to the very soul, so much is primarily about emotion. It's a little bit like performing. I hear people play with very poor technique, but all this musical expression coming out. If you physically can't play the notes, you can't bring it out. You don't need to be able to write an essay. But for Beethoven, you can't play it and have no sense of how it's put together.

Just like everyone at the Creamery, you did an iPhone app.
Stephen: I had nothing to do with the technical side, the company was in touch with me for the music only. We did the Liszt sonata, I was playing the piece, and they filmed it, and added a commentary that goes with it. I have no plans for another one. What I like about this, you feel the internet is going for lowest common denominator. Not here, this was going very deeply into this one piece of music. There is enough for someone who knew nothing in classical music. You can build on and build on. It takes no more space than your iPad does. 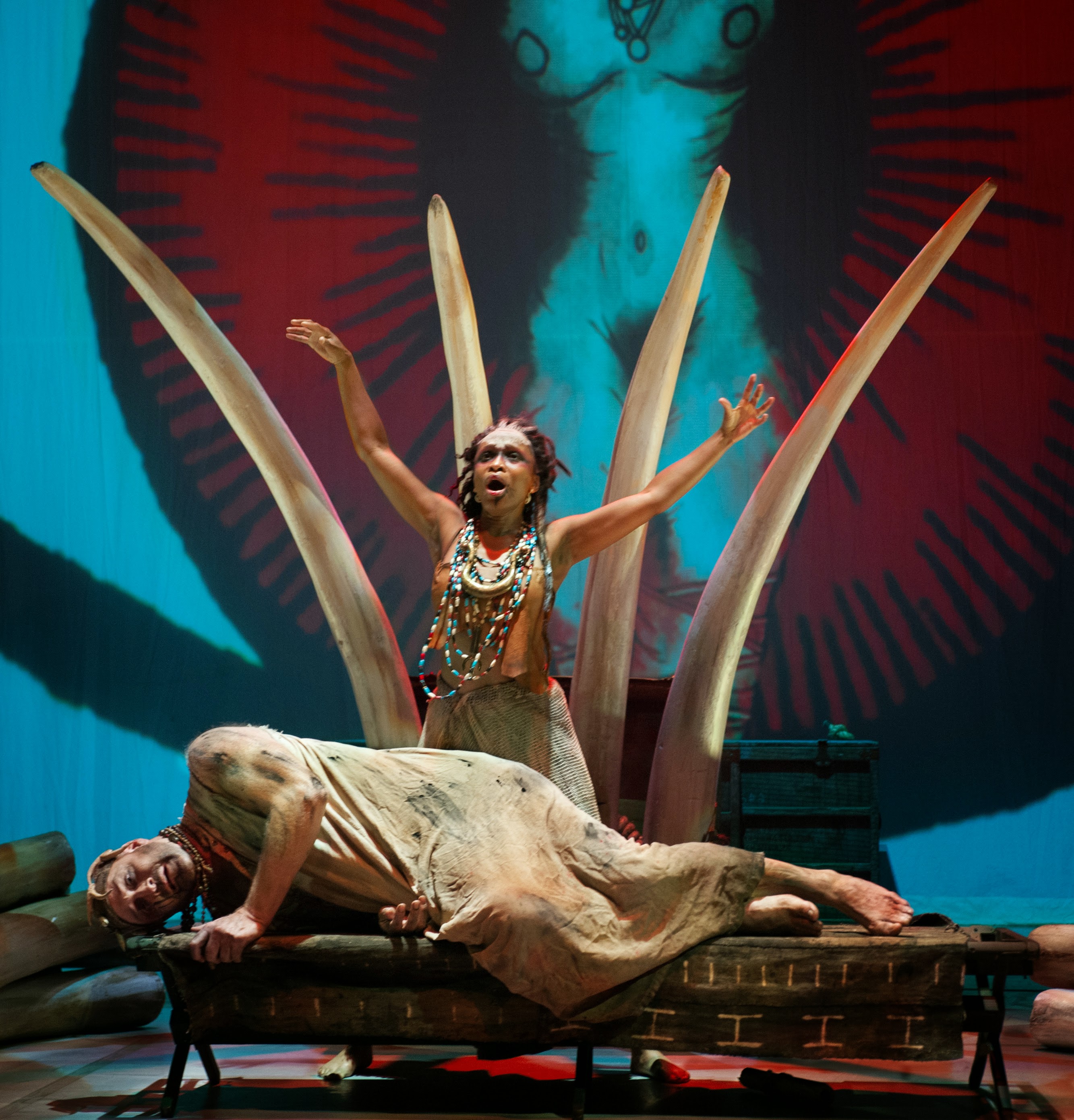 Conrad's Heart of Darkness has been set to opera before: look no further than the movie adaptation of the novel, Apocalypse Now, and its famous use of Wagner's Ride of the Valkyries to depict how people get drunk with the power they've been granted. Opera Parallele's production of Heart of Darkness, an opera by composer Tarik O'Regan and librettist Tom Philips, goes back however to the novel's roots: deep into colonial Africa and with an intimate music score that sheds light into the characters but no one won't confuse for Wagner. For one, it's a chamber orchestra with fewer musicians than in a single Wagner brass section! Opera Parallele has been taking chances in introducing new works to its San Francisco audience, and with Heart of Darkness, they found a gem.

The libretto is indeed very faithful to the book, with plenty of text excerpted literally from Conrad's prose, as we checked afterwards. Of course, it had to be condensed into a seventy minute show with no intermission, with the choice of what to emphasized influenced by Orson Welles' turning the book into a radio drama. The book/opera tells the story of Marlow's trip up the river in Central Africa to meet with Kurtz, who has been collecting ivory for the Company by plundering his territory in a barbaric manner. It opens off with Marlow (sung by Isaiah Bell) describing Kurtz not as a blood-thirsty tyrant, but as a "remarkable man." O'Regan extend this line into a lengthy lament that connotes all the ambiguity of situation: It's not happy, punchy, but rather sad and melancholy, the music of a missed opportunity.

O'Regan's music inventively support the action, using percussive rhythm throughout, with most of the melodic lines for the voices rather than the instruments (percussion, woodwind, strings, harp, and celeste) who provide sparse eerie textures and punchy interjections. Maestro Nicole Paiement led deftly, bringing the different atmospheres to life with sharp colors.

The staging made heavy use of video projections (by Frederic Boulay) to fill up the scene at the Z Space, both on a large back screen and on the floor. And on the audience members who were lucky enough to sit on both sides of the action. These donned white ponchos to appropriately reflect the light, and they had to sit with huge elephant tusks that looked quite cumbersome. We get it: we're all complicit in Kurtz' unspeakable actions. He's acting on behalf of the Company, who is happy to look the other way as long as he delivers the ivory. And Marlow can't find in him to condemn Kurtz. Therefore: society is on stage too, carrying the ivory. It's well-meaning, but as staging goes, that bit did not work; it was the only faux-pas in Brian Staufenbiel's excellent direction which does a lot with only a few items, going clearly back and forth between the present day on the Thames, and the long time ago in Central Africa.

The performers had no trouble filling up the space, with special mention to Bell of course, but also Aleksey Bogdanov as the boilermaker, Thomas Glenn as Harlequin and Shawnette Sulker as the river woman, and the soul of the country that's being raped. Philip Skinner was a rather subdued Kurtz, and ok, he's gaunt and thin and dying, but that's opera, where no one has ever ran out of breath, even for their last one.

See and be seen at these select San Francisco shows, parties, and events. You know, because you can't read the Internet all the time. TUESDAY, MAY 12 THEATER CONVO: Carey Perloff, a passionate

You may recall the big apartment fire at 15th and Church that heavily damaged the entire building at that corner back in February. The fire immediately shut down Church Street Market, the store