Yesterday the San Francisco Giants submitted a ballot measure to the city attorney for their development at Mission Rock, the stadium parking site where they foresee a 28-acre mixed-development. So, take a good long look, since we'll be voting on this come November.

As the Chronicle reports, the project for the site known as Lot A currently has capacity for 2,200 cars, which it fills up just a few times a year. Instead of that parking, which would be replaced by a garage on the site's southern end, the project calls for 1,500 units of housing, with a new increase of below-market-rate units from 15 percent to 33 percent in accordance with Mayor Lee's affordable housing goals. Also in the plans: 1.5 million square feet of commercial space and a new brewery for San Francisco's historic Anchor Brewing Co. 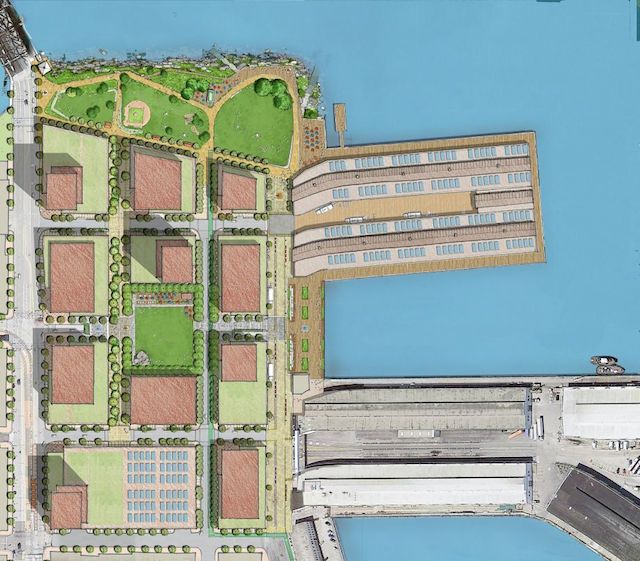 Curbed first assessed the plan when it was revealed back in 2012 and pegged at $1.6 billion. But since then, the climate for building along San Francisco's waterfront has changed. That's thanks to Proposition B which passed with 59% of the vote in 2014. Leaving that ballot measure's call to arms aside (the 8 Washington development or the "Wall on the Waterfront" as it was called in a campaign by opponents like former mayor Art Agnos) the result was requirements for voting on every development proposed along the waterfront in excess of current height limits. So here we are. 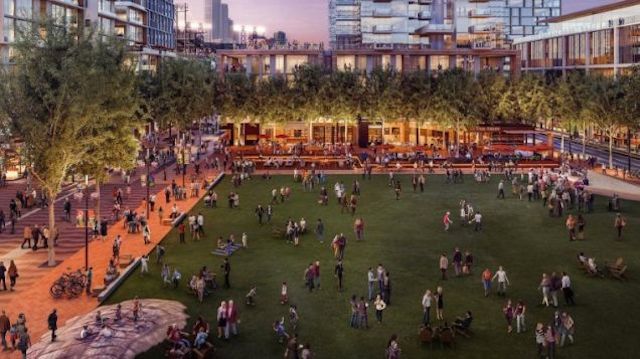 The Giants, who have 50 years left on their lease for AT&T Park, were originally to work on the development with others, but by now they're going solo on the project. And, in response to Proposition B and to appease potential opponents, they've opted to lower heights of some buildings at the site from 380 to 240 feet. Three residential towers would hit that height. Buildings, however, would only occupy 10 acres of the site, with their heights from 90 to 190 feet for offices, and nothing constructed within 100 feet of the water.

The rest of the space? It's to include a five-acre green on the waterfront and a "town square" surrounded by residences and retail. San Francisco magazine writes enthusiastically that "It's like like a whole new Noe Valley sprung like Athena fully-formed from the head of [Giants President and CEO] Larry Baer." All the park-like spaces would be privately maintained.

Retail space would emphasize small, independent stores, avoiding the ire that chains so often inspire in San Francisco. Perhaps we can take the already popular Yard at Mission Rock as a bit of sample development. That's the new area with an Anchor beer garden and local food purveyors along the edge of Giants stadium parking.

"One of the things that residents told us over and over is, 'We want to feel like a San Francisco neighborhood,’” said Jack Bair, general counsel and senior vice president for the Giants. “We have the opportunity to look at the neighborhood holistically, and that doesn’t necessarily mean getting the most rent for the retail spaces. It’s about creating the right mix.” 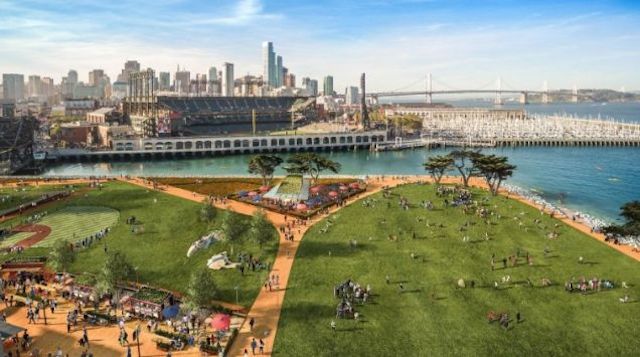 “It appears the Giants have touched all the bases with this revised project,” said a punny Art Agnos, sounding awfully supportive in contrast to his 8 Washington stance. “And those bases are: reasonable heights, increased affordable housing, open space and neighborhood-serving retail to bring some spark to what is an unfinished neighborhood. Assuming all this bears out in the writing of the measure, I think they have done a terrific job of revising the project.”

In case you'd forgotten that BART's tracks are in terrible, terrible shape, a snarled commute in SF today is here to remind you — a "reported deformity" on the tracks between Civic Center and

We're a little spoiled with the victory parades around here, but this is a good question: If the Warriors succeed in winning their first NBA championship in 40 years, which "home" city gets