In a move that surprises no one whatsoever, Facebook's labyrinthian rules regarding ad content are so dumb that they wound up blocking their own, approved material. It's like some sort of Silicon Valley algorithm ouroboros.

Using the above photo, Kingfish had the ad taken down and was told: "Ads are not allowed to promote the sale or use of adult products or services, including toys, videos, publications, live shows or sexual enhancement products." He tried using various photos with only faces, including a stock photo that Facebook provides themselves and, well: 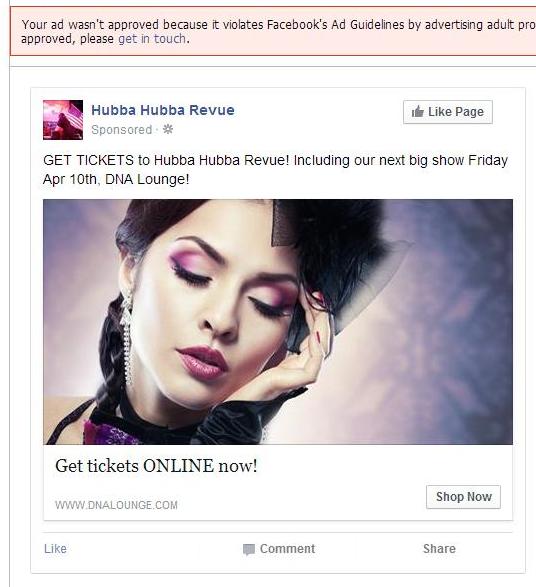 
Thanks for writing in. I'm here to help.

Your ad was rejected because the image doesn't follow our ad guidelines. Ads and there pages may not use overly sexual images, suggest nudity, show a lot of skin or cleavage, or focus unnecessarily on specific body parts.

ICYMI this weekend: Blondie's Bar might be in trouble, self-driving Benz returns to SF, Hapa Ramen's Richie Nakano was fired from the restaurant he founded, KGO's satellite truck went all out, SFPD's crime

The SFPD crime lab has been hit with another scandal as authorities confirm that "irregularities" may affect numerous hundreds of cases relying on DNA evidence. On Friday, the SFPD announced that a lab