The N-Judah has now become a tunnel of love ride thanks to a new Craigslist "missed connections" style site called "We Met On The N." The service promises to make it easier to cruise the Internet for people you were cruising on Muni with its line-specific focus.

"Forty-thousand daily riders. But it only takes two." That's the motto of Alex Lee, the site's founder, whom The Bold Italic reports was inspired by the rare sight of an actual flirtation on a crowded N ride. He started with the N not because it is the sexiest Muni line, as there is no such thing, but because it's the most frequented.

Of course, many will see We Met On The N as another omen that our dating skills are collectively doomed. But it's probably more complicated than that. "There must be a lot of people who want to introduce themselves to someone they find interesting or attractive, but it’s just too painfully awkward," Lee said to The Bold Italic. "Or crowded. It is the N, after all.” In fact, it's inconvenient and oftentimes rude to ask someone on a date while you're crawling along in a busy car. But if you catch someone's eye, why not check the site later, or even post? Looks like it could use a few more of those to get off the ground. 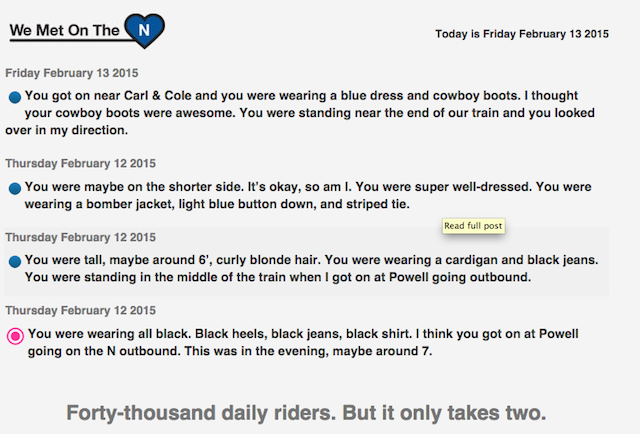 Lee sounds like a hopeless romantic with some programming skills, and we applaud him for it. “We want people to find love!" he said, "And make beautiful babies who will also take the N-Judah, and stand in the middle-accordion-connecting part in between trains, because that’s just clearly the way to go." So this Valentine's day, looks like the only card you'll really need is your Clipper card.

How do you follow up a five-year-old, critically beloved neighborhood restaurant that remains one of the hottest tickets in town, and just as fresh and well loved as it was the month after

At chef Ravi Kapur's new restaurant, Liholiho Yacht Club, you are going to impressed by how effortlessly different Asian dishes and ingredients mix and mingle. Much like the pop-up of the same name