The largest art car ever is in the works for Burning Man 2015. Reddit and the message boards began popping this month with the news that an ambitious crew of Burners was taking a Boeing 747 jumbo jet airliner to Burning Man 2015. SFist has tracked these individuals down, and indeed it’s true. “We are planning on bringing a 747 to the playa this year,” says southern California engineer Ken Feldman, whose previous work includes the Charlie the Unicorn art car. “This will be the largest moving structure to date at Burning Man.”

The ambitious crew of Burners in question is the Big Imagination Foundation, a non-profit formed in 2014 as an incubator for, you know, big art projects and such. Feldman, a veteran of the P. Diddy-endorsed art car Robot Heart, is joined by Rob Volkel (director of the Hula Fantastica Burning Man video, the most-viewed Burning Man video of all time) and venture capitalist Jonathan Teo.

They are not planning on actually flying the aircraft at Burning Man. “While it might be theoretically possible to land a 747 on the playa, it is prohibited by the FAA for a variety of obvious reasons,” Feldman told us. Instead, the aircraft will essentially be carted around. “We’re not just dropping a 747 on the playa. There’s going to be some heavy modifications to it. This will be heavily mutated. It’s going to have some really unique interesting creative features. We’re getting a lot of help from some really interesting people who are really putting their creative stamp on this.” 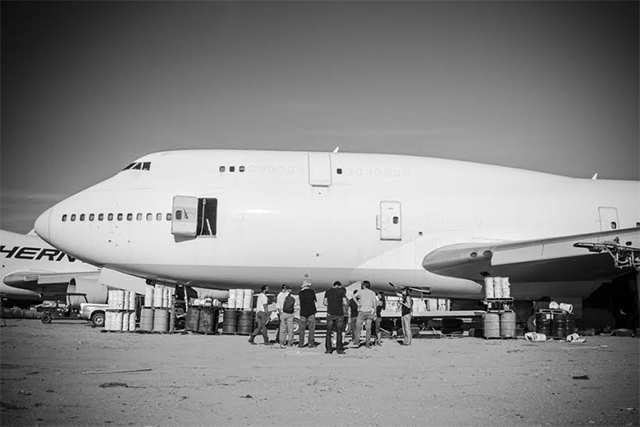 And it won’t be some billionaire Burner playhouse, either. The Big Imagination folks see it as a 300-seat egalitarian "venue on wheels" where everyone is welcome. “It started out with, ‘Wow. Can this be done? This is a formidable challenge’,” said Volkel. “From there, it went a little beyond into, ‘What can we do with it once it’s on the playa? Is it just going to move around and entertain people, or can we do something really special with it? What can we do with it that has it act as a venue rather than just an art car, because this thing carries 300 people?'”

As garish and enormous as a Boeing jumbo jet at Burning Man might sound, the gang is committed to keeping a small carbon footprint. “This is a great example of reuse,” Feldman said. “This plane was going to be turned into scrap aluminum, and then it’s just going to be beer cans. So what if we can do something more with that? Because I think just turning it into a bunch of beer cans is a shame.”

“We’re definitely into the reuse, we’ve very focused on ‘leave no trace’,” he continued. “We’re investigating a variety of ways to minimize our carbon footprint. We will not have four big jet engines blasting us around.”

While declining to say just what this would all cost, the gentlemen noted they are soliciting volunteers and donations for the 747 Project. “This is a complicated task that will require significant financial resources,” Feldman said. “The Burner community has responded in really amazing fashion.”

“Right now we have a really strong engineering team, but you can never have enough people who know their way around the structures of an airplane, particularly around a 747,” he said. “There’s going to be a lot of other ways that people can participate, both before we get to Burning Man and also at Burning Man. We really want to expand and cross-collaborate with a lot of people.”

Previously: Were You One Of 2,000 Burners Who Left Your Bike On The Playa?

The guys surveying the 747 they just acquired. Photo: Sean Zaccheo.

While The Advocate is busy throwing darts at a map to pick its gayest city in America, our own Kink.com is checking out the numbers of folks using their site and others

—
Exclusive: Someone Is Bringing A 747 Jumbo Jet To Burning Man This Year
Share this