As in years past, BART will extend its New Year's Eve service until 3 a.m. If you're not done celebrating the arrival of 2015 by then, have a great Uber.

BART NYE will run a normal but extended weekday evening service schedule 3 am, with trains running every 20 minutes after midnight. Extra trains will be standing by in downtown San Francisco after the fireworks show.

And, to hypothetically relieve congestion and maybe actually play a cruel game on us all, "skip-stop" will be back. Beginning at 8 p.m. at the busiest stations (Embarcadero, Montgomery, and West Oakland stops) BART will use this special train pattern into and out of San Francisco. Have a look and make your plan now, because you may be in no condition to do so come that evening. 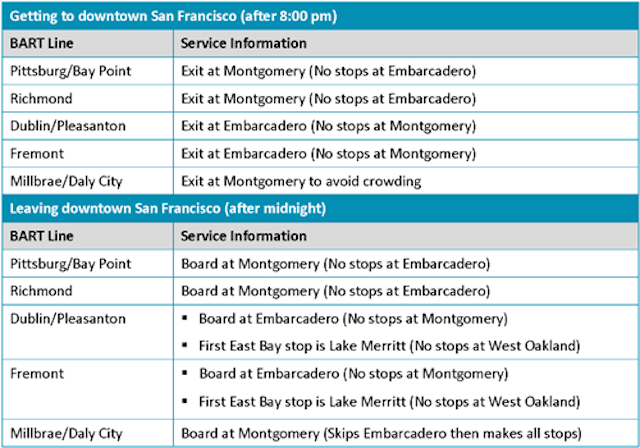 On New Year’s Day, while BART is laboring over a New Year's resolution for itself (I can think of several), the service will operate a Holiday/Sunday timetable starting as usual at 8 a.m.

Leland Yee’s trial is set to begin in June. [KTVU] Areas in San Francisco with most pedestrian deaths are, wait for it, also ones with fewest tickets for offending drivers. [Streetsblog SF]

December is a season of celebration for most restaurants, and 'tis the season of lists, like our roundup of the best new restaurants of the year. But it's also a season when we

—
NYE BART To Run Until 3 AM, Tradition Of Skip-Stop Continues
Share this