Two separate reports  one of a potentially poisoned meatball found by a dog owner on the street near Potrero Hill and another of an alleged "eight pounds" of chopped onions found scattered in the sand at popular dog run Fort Funston  have surfaced in recent days raising fears that an evil dog killer is back on the attack. This would mark the first reports since February of the as yet unidentified meatball poisoner who has struck in different neighborhoods over the last year and a half, and was responsible for the death of at least one dachshund in July 2013.

As CBS 5 reports via Redditor Bargain Manatee, a large quantity of chopped red onions were found scattered at Fort Funston on Sunday, some of which can be pictured here. As you may know, onions contain a substance, thiosulphate, which is fatal to dogs in large quantities. The dog owner writes, "What you see here was just what could be seen without moving the sand around," adding that the amount he found "would be enough to kill quite a few dogs." 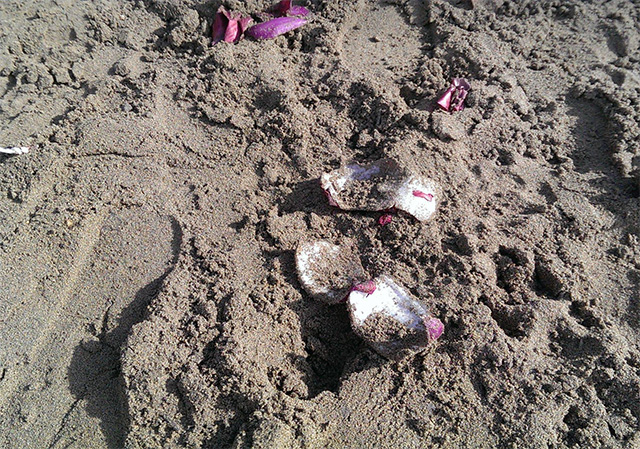 Then on Tuesday both CBS 5 and the Bold Italic got a separate report of a potentially poisoned meatball being found "on the overpass at Highway 101 near Portrero Hill." That meatball has been sent for testing.

This is the first return of what could be one or multiple dog-hating suspects putting out poison-laced treats for curious canines since May of this year, when dog trainer Shura Kelly stumbled upon a plate of pill-studded meatballs (along with a candle and some quarters, bizarrely) in the Outer Sunset.

Dozens of poisoned meatballs were initially found in the vicinity of Twin Peaks, Glen Park, and Diamond Heights in July 2013, which led to the untimely death of a dachshund named Oskar despite heroic efforts to save him.

More meatballs were then found in a similar location near Twin Peaks, in the vicinity of Crestline Drive and Parkridge Drive, in February of this year.

The reward for nabbing this despicable dog-killer was upped to $25,000 this year with the help of Yelp CEO Jeremy Stoppelman, as the Chron reported, yet still no suspects have been found.

So, a warning to all dog owner to keep tight leashes on your pets and a vigilant eye on where they're sniffing.

In the fourth consecutive such rally in a row for Berkeley, protesters took to the streets Tuesday night for a lengthy, mostly peaceful march that extended many miles from Berkeley to downtown Oakland

SF's trying to keep Telegraph Hill from falling apart. [ABC7] A man who'd been on San Quentin's death row since 1996 has died. [KRON4] Jesse Jackson's back in Silicon Valley to call tech

—
Evil Meatball Poisoner Back Out There Terrorizing Dog Owners?
Share this