Heavy rain is the story of today's commute, causing dozens of crashes with over an inch of precipitation so far according to the Chronicle.


RUNOFF FROM
HEAVY RAINFALL IS EXPECTED TO CAUSE PONDING OR FLOODING ON SOME
ROADWAYS...POOR DRAINAGE AREAS AND LOW LYING SPOTS. THERE ARE
REPORTS OF ROADWAY FLOODING AND ROCK/MUD SLIDES THIS MORNING AS WELL
AS NUMEROUS REPORTS OF ACCIDENTS DUE TO WET ROADWAYS.

Meanwhile the California Highway Patrol reported a large number of crashes, traffic hazards, and flooding. There are also delays and cancellations aplenty at SFO:

*Attention Travelers* Please check with your airline regarding flight status. Rain and winds are causing delays and cancellations. #SFO

Rain, slowing in the afternoon, will pick up again this evening and stick around tomorrow and Thursday in isolated showers. The Chronicle's welcome news is that "rainfall totals for the Bay Area could approach normal for the season after three years of drought."

But are drivers out of practice when it comes to navigating the rain? This one southbound commuter who drove into the pedestrian walkway on the Golden Gate Bridge this morning would suggest yes. 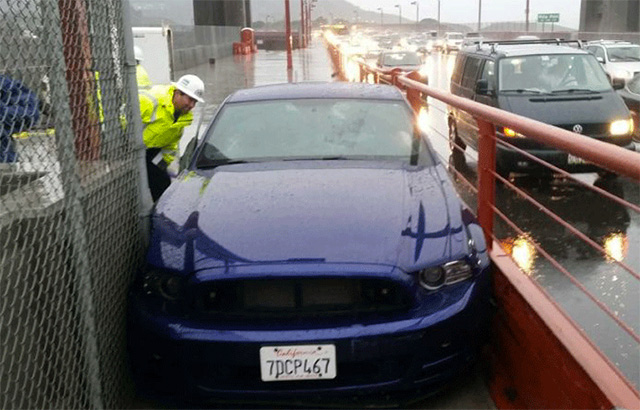 As reports NBC Bay Area, officers arrested a 22-year-old from San Francisco at about 5:15 this morning after he drove his car onto the narrow bicycles and pedestrians only portion of the Bridge headed toward San Francisco. Surprise: there is suspicion of a DUI.

The CHP and bridge engineers are still trying to figure out how to un-wedge that Mustang. We can also see the aftermath in the Vine below, via SF Weekly.

Photo courtesy of @GGBridge spokesperson Priya Clemens who says this has NEVER happened before. pic.twitter.com/2dJXZKkjER

The Ferguson protest that turned into a violent and vandalism-heavy riot Friday in Union Square and in the Mission led to 79 arrests and charges filed against 4 individuals, as police chief Greg