The Negev, a network of three commune-style SROs in SoMa that we wrote about last week, are marketed on Craigslist and a snazzy website as a paradise for young urban professionals: "Instant Friends & Community: Mostly hackers & founders." Coding sessions, parties, and college recaptured. It seemed too good to be true, and yes, it was in fact a lie. Before any of the red flags (now hoisted high by the press) were raised, I went to see the Negev Folsom, which is at 1040 Folsom Street, during a crowded open house last month.

The fact that the Negev is a converted SRO was certainly not disclosed to the group of about 30 supplicating applicants. Gathered uncomfortably in a circle in a large lobby area (with a house member and part-time DJ spinning, quietly, in a corner) the assembled group introduced themselves to a few current house members, who dropped vague descriptions of their backgrounds and careers, invoking Google and Harvard with scant elaboration.

Hoping to occupy one of the 70 total spots that house members claimed would become available, when one shy applicant took his turn, he described his job as a physical education teacher. Current house members were visibly bored and moved quickly to the next applicant who seemed a better fit with a job in the tech sector.

But the tour, not the group chats and interviews (a taped video from each applicant was also requested) was the real showstopper. I've seen some pretty cramped housing before, but nothing like this at the requested price. All quarters in the Negev looked to be under heavy construction, with about half of a giant kitchen complete.

Notably, no mention was made of the three-alarm fire which took place in May 2011 from which the Negev was born. Now, private rooms and shared living spaces are advertised at $1500 or less per month. Prison was the metaphor that came to mind (for me and other applicants I chatted with outside afterwards). In part, the comparison was sparked by sinks provided in each miniature bedroom (bathrooms at the Negev being few and equally small).

Danny Haber, 26, and Alon Gutman, 27, are the cofounders of The Negev Properties LLC (Gutman was present to lead the tour on the evening in question) and the two were presumably in stealth mode about the renovations of what was once The Park Hotel. Then, earlier this month, the Examiner broke the news that the Negev's 1040 Folsom location had allegedly displaced six former tenants of the building, who under San Francisco's rent control ordinance were entitled to re-occupy the building within 30 days of the post-fire repairs being complete. Adding insult to injury, Haber allegedly attempted to bribe a former tenant, 63-year-old Patricia Kirkbride, with a paltry $500 to forget about her past home. 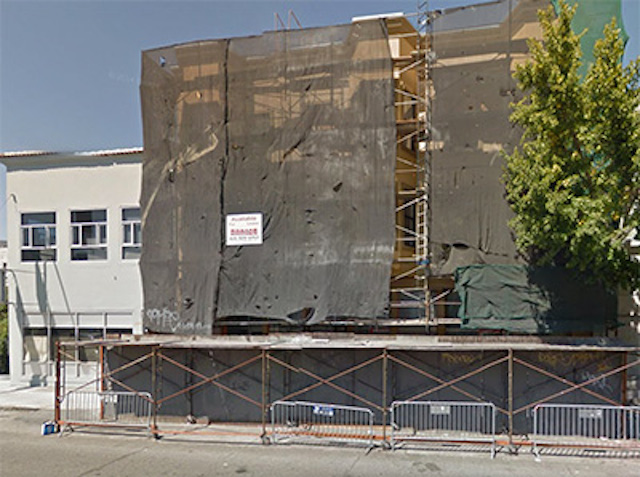 Today, the news centered on the Negev's other location at 219 6th Street. Here, the Examiner reports a complaint detailing a horror show of abuses: One former resident cited an inoperable heater, faulty electrical wiring, no deadbolts on some doors, a faulty fire escape and smoke detectors, no secure mail receptacle, cockroaches and mice, no hot water, a consistent odor of gas from a broken water heater, and 60 people living in a place with a 22-person occupancy limit. The complaint also alleges that residents were bullied into spending their own time and money to fix house problems. Prior to its incarnation as The Negev Sixth, the building was the San Francisco Gospel Mission, a nonprofit, Baptist mission for the homeless.

Today, founders Gutman and Haber are expected to take part in an audit of records for the past two years to determine whether the Negev is in compliance and up to code. The City's Department of Building Inspection, which has been on the Negev's case, will also investigate whether construction work was done without proper permits, and a department official tells the Examiner that up to 25 rooms might have been counted in a space that can at most have 19. And isn't it illegal to be moving people into a place that's under construction?

When I ran into two house members I recognized from the Negev last weekend at a party, I asked them how things were panning out at the like-minded hub. Expecting complaints or disappointment from them about the Negev's leadership, I heard instead the claim that no one would be moving out. Everything was under control, they said. In fact, they informed me, the complaining former SRO tenants had been rounded up by the Tenderloin Housing Clinic who were itching for a fight.

I spoke briefly on the phone with Gutman and Haber, who declined to comment until "some time next week."

A Department of Building Inspection hearing about the living conditions at the Negev Sixth Street is scheduled for December 4th.

All coverage of modern communes on SFist.

1040 Folsom, via Google. It still basically looks like this.

There's probably already a line forming at the new Hapa Ramen, even though it doesn't open to the public until Sunday, but there's actually plenty else that's been happening in the local food

We would like to take a moment to thank this week's advertisers on SFist. Polk Audio introduces the Omni Collection: the first great-sounding wireless music system. Try one out today and hear the