Another terrible new development in our transit landscape has arrived: Chariot, a private bus service that is currently serving two routes in the morning and evening, both of them catering to Marina dwellers. Not content to ride the Dirty 30 or the 30X Marina Express, people can pay around $4 a ride (or $93 for a monthly pass) to get shuttled in greater comfort, Google bus-style, directly from Chestnut Street either to the Financial District or SoMa.

As TechCrunch reports, "the company is doing about 2,000 rides per week and has provided roughly 35,000 paid rides to date." And they're getting set to launch a third route, also from the Marina, to western SoMa  they're doing this on a crowdfunding model, waiting for 120 riders to sign up and buy monthly passes before they launch it.

While this all may seem ugly and capitalist in an era when Muni needs all the help and financial support it can get, it should be noted that many of Muni's routes were, at one time (pre-1912), run by private entrepreneurs and were only later absorbed under a single system. The Bold Italic adds that there were private jitney lines throughout town as late as the 1970s. And given Muni's slowness, and the difficulty of getting from the Marina to pretty much anywhere, a shuttle service like this was inevitable. Note the following sales graphic, appealing to Marina girls who don't want to wear out their expensive heels. 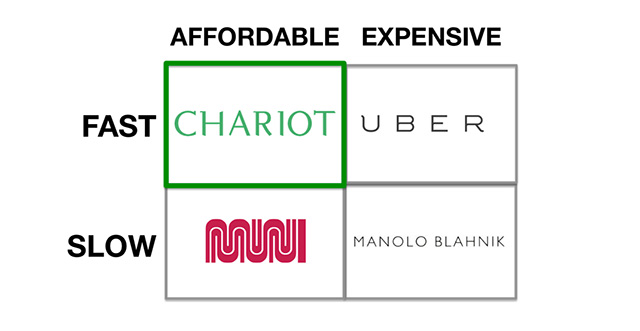 Chariot now has a mobile app that shows the location of shuttles in real time and lets customers check in for their rides.

And CEO Ali Vahabzadeh says he doesn't think they're competing with Muni so much as they're providing an overflow option. "A lot of our customers are actually [watching as] three or four buses [pass] which are overcrowded," he says. "I think we’re actually bringing more commuters back into the transit-first fold as opposed to having them drive to work and congest the streets even more, or commute through Uber, Lyft or Sidecar."

And that would be the private-transit-first fold, just to be clear.

A ferry captain made a gruesome discovery during Tuesday morning's commute: a dead body, floating in the waters near Alcatraz island. According to the Merc, the captain of a ferry headed from Sausalito

How easy is it to rob a bank these days? It seems fairly easy as three different banks fell victim to at least two male robber suspects on Friday and Saturday. And I