It's been nearly 44 years since pedestrians were charged a toll to cross the Golden Gate Bridge. But if one point in a Golden Gate Bridge fundraising plan gets approved, that toll would be back on again, as well as one for cyclists.

According to the Marin Independent Journal, the Golden Gate Bridge district is looking at a five-year, $33 million deficit, the result of "personnel costs, the seismic retrofit of the span, a $75 million bill to help pay for the ongoing Doyle Drive upgrade, south tower painting and the partial loss of revenue from a downsized local bus contract with Marin County."

Apparently, the $19 million in salary savings that dumping human toll booth workers was supposed to accomplish wasn't enough for the District, which Monday released a 45-point plan to keep the agency above the choppy waters of debt.

One of the points is "Evaluate sidewalk access fees" for bikes and pedestrians, with a possible implementation date of some time in 2017. This isn't the first time fees for these folks have been considered: back in 2009, the GGB put a charge for pedestrians and cyclists on their financial plan, but dumped it due to "ongoing maintenance on the sidewalks," the I-J reports.

A similar toll was also proposed ia decade ago, but was quashed after vigorous protest from bike groups.

Bridge spokesperson Priya Clemens says that "This is something the board's financial advisory committee would like the full board to consider, but it is by no means set in stone. It's just a concept right now."

Perhaps its conceptual nature is why the District doesn't seem to have a solid idea of how much a toll like this would generate. Our best guess is from the numbers bandied about during that decade-ago conversation, when revenues of $500,000 to $1.5 million a year were estimated. 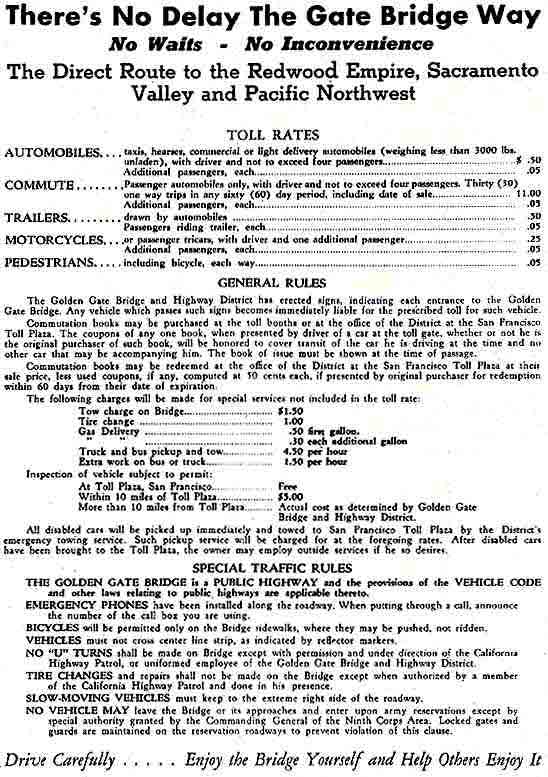 In 1937, pedestrians were changed a five-cent toll to cross the bridge through a turnstile, a fee that had been raised to ten cents by the time the toll was abolished in 1970. But the mention of the turnstile raises a good point: without any human toll-takers on the bridge, how would fees be elicited from pedestrians or cyclists? Will they, too, be required to wear FasTrak on their person to get on the Bridge?

Oh, right, it's still just a concept. Anyway, the Golden Gate Bridge Board will be meeting Friday at 10 a.m. to discuss this and the other 44 points on the "oh jeez how do we make some money" plan. The public is welcome to attend. Original toll rates and general rules of the Golden Gate Bridge: SF Museum

In all my life, I've rooted against a Bay Area team exactly once. It was for Kansas City and against San Francisco  and I'm not even ashamed. It was Joe Montana's second season