All good things must end. David Gockley, the Giants-hat-wearing genial host of the free Opera in The Park concert announced last Friday he would end his tenure as SF Opera General Director after next season, his tenth at the helm of the company.

The next day, the company presented Verdi's A Masked Ball, a perfect illustration of Gockley's vision: an amazing cast hand picked with no vocal compromises to perform a warhorse on a rather boring stage setting that will not ruffle any feathers in the audience. Gockley obviously believes that the classical repertory cannot be shown too much respect. He counterbalanced these conservative productions with an aggressive commissioning program of new operas, and brought some rarely performed oddities to the main stage. His tightrope walking between keeping the art form alive with new creations, and keeping the company alive with butts in the seats is nothing short of impressive.

A Masked Ball features five principal singers: Gustavus, a ruler beloved by his people for his generous policies who is brought down by an extramarital affair (unconsumed, he did not have sex with that woman); the love interest, Amelia, her husband, the Count Anckarström, Oscar, a messenger, and Ulrica, a fortune teller. And it is Gockley's legacy that the last two supporting parts would be cast by singers who could be leading the cast themselves: Heidi Stober (in a role in pants) and Dolora Zajick, both outstanding. Stober brings a welcome levity to the performance, as a convincingly youthful and enthusiastic page, and her soprano voice cuts through the male chorus of the opening scene with pinpoint accuracy. Zajick's turn is short but memorable; her first note comes from deep inside her belly, low and vibrant. It's sheer pleasure when it opens up at the top of her range. 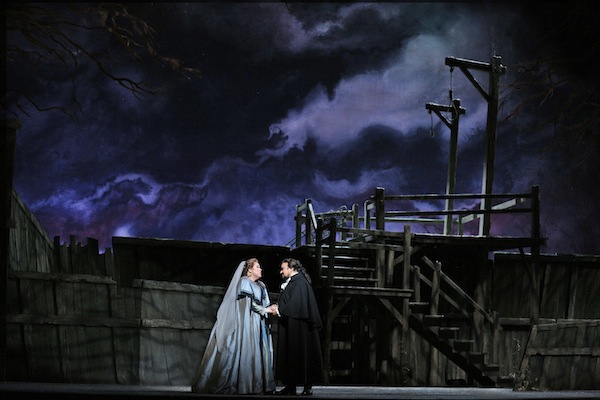 But it's Julianna Di Giacomo (as Amelia) and Thomas Hampson (as her jealous husband Anckarström) who provide the most intense moments; Amelia captured our attention as soon as she got onstage. Her voice both strong and round edged shone in the delightful trio with Gustavus and Ulrica. In the haunting prayer to her husband, backed only by a cello, she vividly brought out the heart of a condemned mother. Hampson's vivid baritone conveyed the pain of betrayal, and his oath to vengeance in the third act was definitely chilling. Anckarström is the loyal friend of Gustavus, and Verdi's orchestration opens that aria with the lowest strings of the harp, as if even this instrument, typically used to highlight ethereal angels, had been wronged by the love of Gustavus and Amelia. Ramón Vargas' Gustavus had a warm and delicate color of tone, but seems rather subdued in comparison with the other principals.

As for the staging: the sets are beautiful, the effect of snow falling on the gallows is striking, mirrored later on by some glittery sparkle falling from a balcony. Yet thinking about the stage direction a couple days later, little stands out aside from the vivacity of Oscar. Maestro Luisotti led the orchestra and chorus with verve in the Verdi score with a crisp attention to the orchestral details (and there are repeated leitmotifs and a broad scope to the score that denotes, if not an influence, at least a healthy respect from Verdi to his contemporary Wagner). Luisotti shaped the overture to Act II for instance with such perfect pacing and momentum that we were in no rush for the curtain to open. 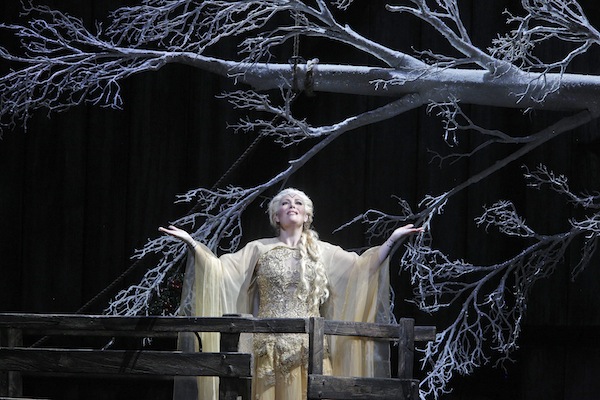 Sondra Radvanovsky was a luminous Norma.

Earlier this season, Bellini's Norma presented the same side of Gockley's legacy: Sondra Radvanovsky in the title role gave a transcendent performance of a repertory mainstay, while the staid staging told the story without much inspiration. Norma is a druid who fell in love with Pollione, the chief Roman invader, only to see him dump her for Adalgisa, a young priestess. Pollione's excuse for betraying his vows to Norma? "It's my destiny to love you and abandon her," he sings to Adalgisa, a line we did not think could work.

Sondra's voice has an eerie magical reverberation. In the cartoon, the whale who wanted to sing at the Met has three uvulas for as many voices, and Sondra's voice seem to have that same multiplicity of voices for an incredible depth of sound. The Casta Diva aria, beautifully introduced by a flute solo both lyrical and melancholy, has this melodic motif that twirls downwards, and it was like flying down on the wings of Sondra's voice.

She's a soprano, but with a surprising strength in the mezzo range, which provided a warm and supportive countermelody to her duet of the first Act with Jamie Barton (Adalgisa). But it's in the second Act that she shone, first in her monologue while decided whether or not to kill her kids (who were great actors!) and especially in the final scene, where we literally cried at her poignant resolve. She shared that scene with a rather disappointing Marco Berti (Pollione, the main male character) who could not find his pitch, except when lifted at the end by Sondra's greatest. Jamie Barton on the other hand was squarely on pitch, with a big voice that expands in the lowest notes and provided a perfect foil to Sondra's soprano. 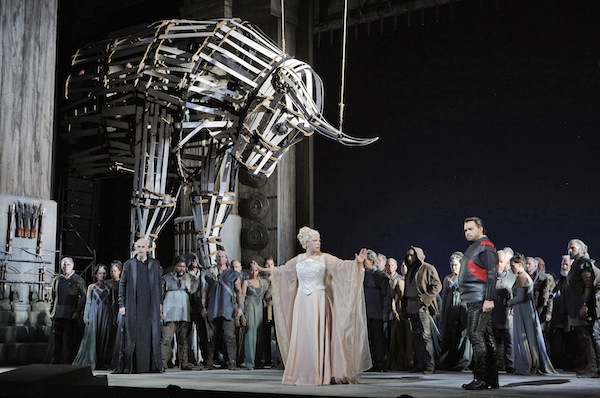 The Trojan horse is a druidic bull.

As to the staging, it is symbolic of sacrifice and destiny, except we did not see it. Supposedly the Druids are building a war machine, but they end up setting it on fire at the end, which makes little sense since even if they had to punish Norma for consorting with the enemy, they would still need the tools to fight that enemy. Then again, we could not care less that they burned down their weapons when we were busy tearing up at Sondra's powerful depiction of Norma's demise.

The other side of Gockley's dual personality - or rather, the mistress on which to spend the money from the Italian repertoire - has been to bring new or rarely heard operas onto the War Memorial main stage. Written in 1955 by Carlisle Floyd, the opera Susannah finally received its San Francisco opera premiere last month, with a splendid cast led by Patricia Racette in the title role. Those keeping score have noticed singers with awesome credentials are the constant in both in the traditional pieces as in the more adventurous ones. 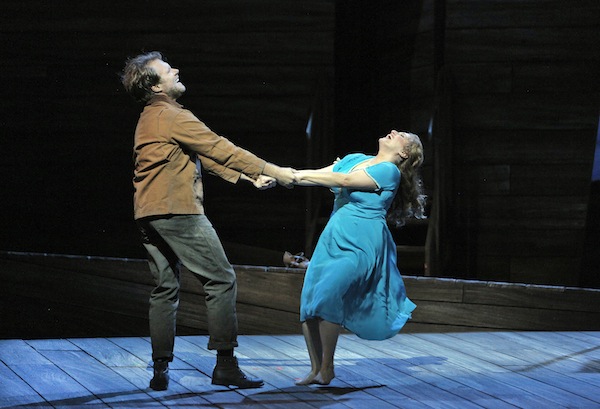 Susannah is a reverse Peter Grimes: the title character is an 18-year-old outcast, and she too is crushed by the squalid narrow mindedness of an isolated community. In this case: a Tennessee backcountry valley that, like Grimes' borough, has its share of righteous and controlling people who can't tolerate a personality that is outside of their norms. But unlike Grimes, Susannah is innocent, only raising the ire of her fellow villagers by being pure, naive, beautiful and unaware of the sexual attraction she has for the men in the village. She has a dream of leaving them all behind to go to the big city. She is caught skinny dipping in a creek, but what should be a violation of her privacy is characterized as indecent exposure. Enters a preacher who pretends to save her, but rather rapes her, and you have a condemnation on the hypocrisy of religious fanatics that still applies today.

The opera is a somber score enlivend by some folksy Copland-esque interludes and as Britten gives voice to the sea in Grimes, Floyd finds the vernacular of the valley, in between bluegrass and dark forests. Susannah's aria "the sky's so heavy" reminded us of "its a wonderful world," a somewhat ironic nod if any. Patricia Racette, seen on this stage as the faded middle aged Dolores Claiborne, or more recently as the young geisha Cio-Cio-San, manages to be believable as the naive and youthful Susannah. She carries the opera on her able shoulders. As the evil Reverend, Raymond Aceto made us queasy. His deep booming bass dominated the stage as he preached; but he found an unsettling vulnerability in a big solo aria where he doubts himself and feels sorry for Susannah, even though he sexually abused her. From the point of view of his performance it was very impressive. From a moral point of view, it was rather confusing to feel empathy for a rapist. 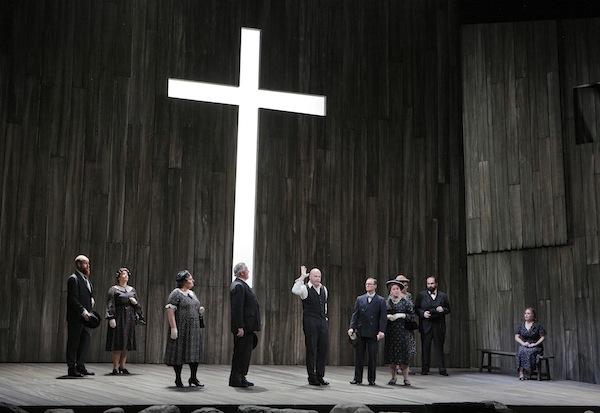 All characters are somewhat flawed in Susannah, and her brother Sam presents a mirror image from the Reverend: as an alcoholic who leaves Susannah alone when she's vulnerable, he does not pretend to be good, but has a good heart. He's a minor character, yet he floored us with a song of unexpected lyricism (on the theme of "it's about the way people is made and how they like to believe what's bad") and a soaring voice of unbearable intensity. This is when it hit us that Gockley had cast Brandon Jovanovich in this small role, a tenor of Wagnerian abilities (he sang a wonderful Lohengrin last year) for a measly pair of tunes. Karen Kamensek conducted the varied score, which ranges from intimate to village fest to booming brass that wouldn't be out of place in Star Wars, without a hitch.

The modern operas seem to bring more invention in the creative teams, as if they were not ossified by the years of traditions. Susannah makes apt use of video projections on scrims and a stage that opens in the middle to symbolize both a creek, and the cracks into the souls of its protagonists. The staging is lively and enhances the story telling, creating a pure atmosphere in the woods or an oppressive one in the church.

Julianna Di Giacomo and Ramon Vargas flirt at the cemetary.

In case you missed it, one of the biggest headlines of the week was the announcement that Baker & Banker is closing later this month, after being in business for five years. Then

Those new to S.F. and its food lore may not have heard of Cecilia Chiang, and that's a shame. The 94-year-old retired restaurateur, whose flagship Ghirardelli Square restaurant The Mandarin closed in