Nobody talks about Mid-Haight, because there's not much there between the retail corridors of the Upper and Lower Haight, on that stretch between Central and Divisadero. But now Ritual Coffee is opening their first free-standing, brick-and-mortar outpost outside the Mission and it will be there, at 1300 Haight Street (at Central), in a former dry cleaners. As Inside Scoop reports, Ritual founder Eileen Rinaldi has a remodel planned for the 800-square-foot space, but there does not seem to be a projected opening date yet.

Ritual was, along with Blue Bottle, one of the pioneers in San Francisco's so-called "third wave" coffee movement, opening in 2005 at 1026 Valencia Street. Rinaldi prides herself on the "aggressively light" roasts of her brand, and the "down-to-the-second precision" of her team's on-site brewing. And, she insists, none of this coffee perfectionism is about pretension or over-complication. " "We do it because pretty much everybody who works here has had a moment where a really, really good cup of coffee changed their lives."

Ritual's other two locations are coffee stands, really  one at Flora Grubb in the Bayview, and one at Proxy in Hayes Valley, next to Smitten Ice Cream.

And if you haven't seen the Valencia café lately, you might want to check it out. They've followed the trend of Four Barrel and The Mill by getting rid of wi-fi, in an effort to encourage more conversation and quiet contemplation (and, obviously, to discourage less lengthy sitting and working). And they've significantly remodeled the place as of August, as you can see in the photo below. 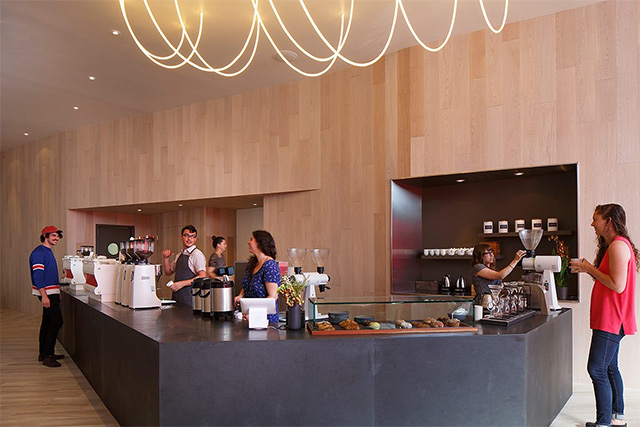 Yes, you just recovered from the crowds at Oracle OpenWorld, we know. But now an even bigger event, Salesforce's Dreamforce convention is here through Saturday October 18 to snarl things right back up

A quick update in the ongoing, insane saga of poor, (most probably) brain dead Jahi McMath: A court-appointed medical expert has submitted a new opinion stating that 13-year-old McMath remains brain dead despite