Ever since the San Francisco Planning Commission opened the floodgates with their Pavement to Parks initiative five years ago, our city has been awash with adorable, tiny parklets. These micro-parks widen our sidewalks by reclaiming street-parking spaces and creating lounging or sidewalk-dining areas  and while some may seem to belong to their adjacent restaurants or cafés, they are in fact all under the control of the Planning Department, and are simply "hosted" by their adjacent businesses. Now there are even mobile parklets, which is just crazy. Here's the complete map of parklets around town, which now number well over 40, with a few more still in the works. Below, we bring you our favorite ten. Lattes and skinny jeans not required.

This café may not be everything it once was (it changed ownership shortly after this parklet went in in 2012), but it still boasts one of the most architectural and thoughtfully designed parklets in the city. Designed by Ogrydziak/Prillinger Architects, the sloped, wood-paneled pods encourage reclining and leaning, and the whole thing was intended as a way more conceptual and art-y idea than mere café seating. As the architects said at the time, it's a "landscape" with "isolated pockets" of nature that are meant to provide an "immersive experience." Beyond all that, it just looks cool. - Jay Barmann 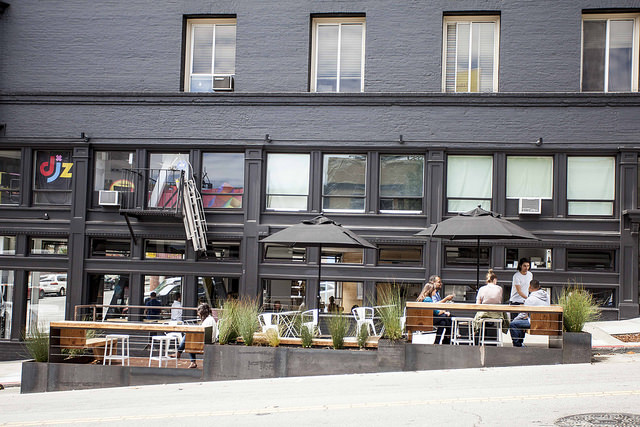 This three-tiered deck of benches and seating outside Reveille Coffee is an elegant example of café seating done right. Designed by Cameron Helland at Sagan Piechota Architecture and installed in 2014, it combines wood counters for leaning, steel-faced planter boxes, dark-stained decking, and two clever Z-shaped benches that function as seating on both sides at two different heights, conforming to the sloped site. Also, look how handsome it is in front of the building's black-painted facade. - Jay Barmann 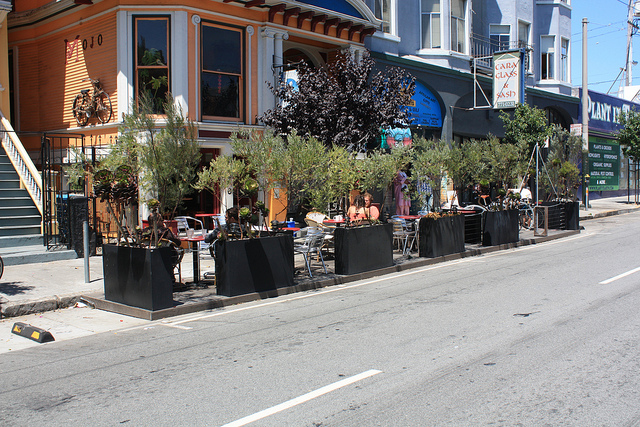 This is San Francisco's OG parklet, built back when people felt like they had to put quotation marks around the word. Like a club recommended by Stefon, this parklet's got everything: bike racks, tables and chairs, a whole bunch of plants to shield you from Divis auto traffic, and BEER. Though alcohol isn't allowed on most parklets at any time (as Hoodline reported in 2012), Mojo got a liquor license for theirs. That means beer (or wine, if you're fancy), parklet-style. - Eve Batey 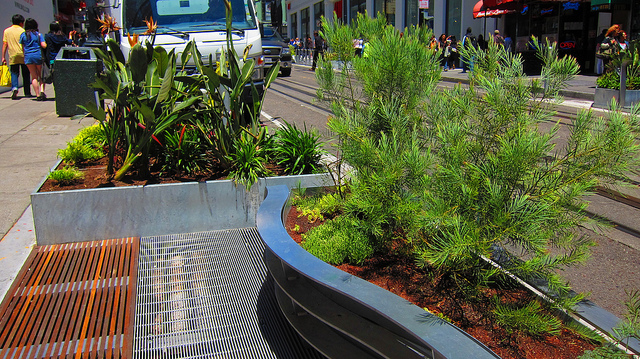 The award-winning Powell Street Promenade is way more than a parklet — its eight sections, spread over two blocks of Powell Street, is a combination of swooping metal sidewalk extension, boyfriend/husband seat for men who appear to have wearied of their partners' Union Square shopping, and home to some of the only plant life (not counting the kind you smoke) you'll see in the area. Yes, it's downtown, so sometimes there are homeless people resting there, or overly-aggressive pigeons brawling over a Blondie's crust. But that's life in the big city, and bird battles are a small price to pay for the extra room to breathe this parklet's given Powell pedestrians. - Eve Batey 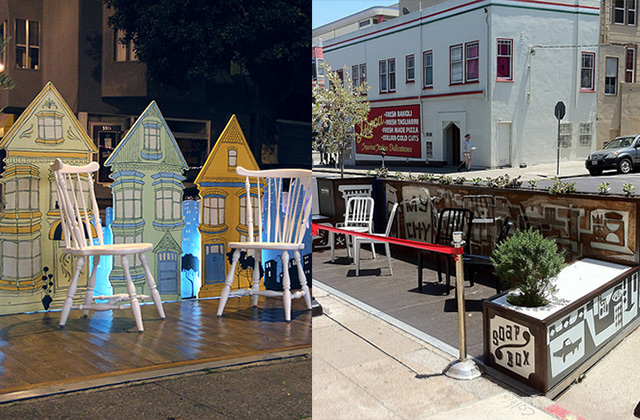 Unlike most other parklets, the one outside Luna Rienne Gallery has remained an ever-shifting venue for public-art installations, beginning with Erik Otto's whimsical The Peacekeeper in 2011. Artist Ursula Xanthe Young's Head in the Clouds (2013) is pictured at left, featuring "a 3D cityscape mural and outdoor theater set along with vintage victorian seating." And the current installation, at right, is Brian Barneclo's Misinformation, installed this past June. - Jay Barmann

This parklet, also known as 'Deepistan National Park(let), is (as of publication time) San Francisco's only residentially-managed parklet. Homeowner Amandeep Jawa and some friends has turned the parking space in front of his home into a place where everyone's welcome. How great is that? (Really great). It's gorgeous, green, and best of all: it has a triceratops. Named Trixie! - Eve Batey 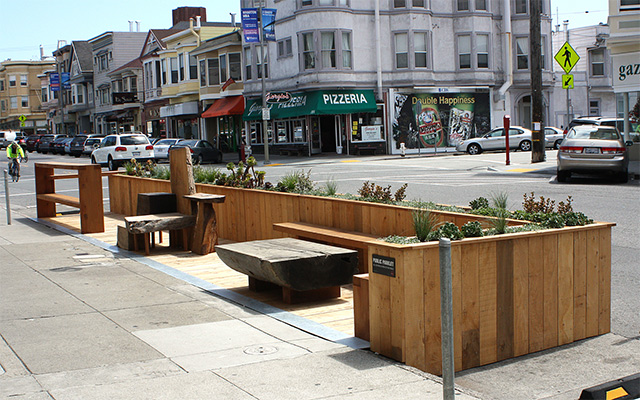 This lovely Richmond district parklet was built by the designers and woodworkers of Anzfer Farms, and it serves partly as an outdoor showroom of their woodworking crafts. The parklet includes some counters for leaning as well as some cool custom furniture made from salvaged and reclaimed materials, which is Anzfer Farms' bread and butter. - Jay Barmann 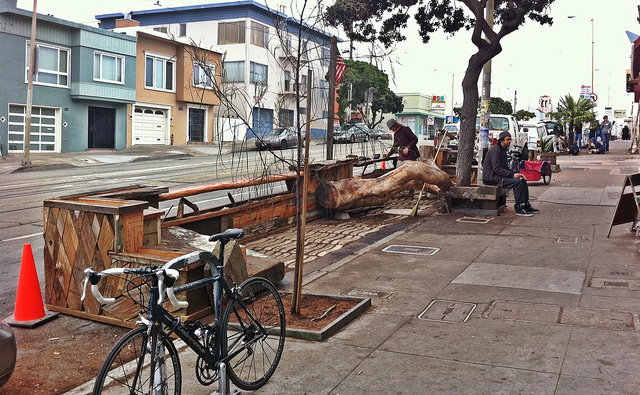 At first the fallen tree that bisects this parklet looks like a waste of space, but when you see all the kids and dogs who clamber around on it like a piece of playground equipment, you realize that its designers really knew what they were doing. The best seat in the house is atop three levels on the far-western end of the structure — from there you can survey Trouble's ever-present line, see the newly-tattooed stagger out of Jesse Tuesday's joint, and watch the Sunset's longest-time residents grapple with its recent hipster influx. Or flip around and watch the cops bust (or fail to bust) drug dealers in front of the 7-11 on the other side of Judah. Your call. - Eve Batey 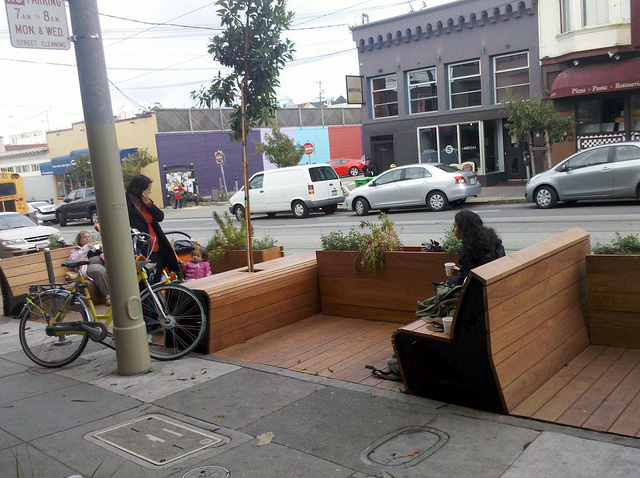 There's been a rumor going around the Inner Sunset that this parklet will be demolished as part of the Inner Sunset TEP Streetscape Project, but Mike Reiger with San Francisco's Department of Public Works tells SFist that (as of publication time) nothing could be further from the truth. In fact, he says, all three proposals currently under consideration for the area incorporate the parklet, though Option C, which involves breaking the parklet up, has gotten the most raves from parket architect Jack Verdon. Regardless of how it's shaped, there are few finer ways to spend some Inner Sunset free time than at that parklet with with a cup of coffee, an Arizmendi cookie, and a pal (or a book). Watch the poor saps on the N woosh past as you stretch out on the parklet's surprisingly comfortable wood seating. Life is good. - Eve Batey 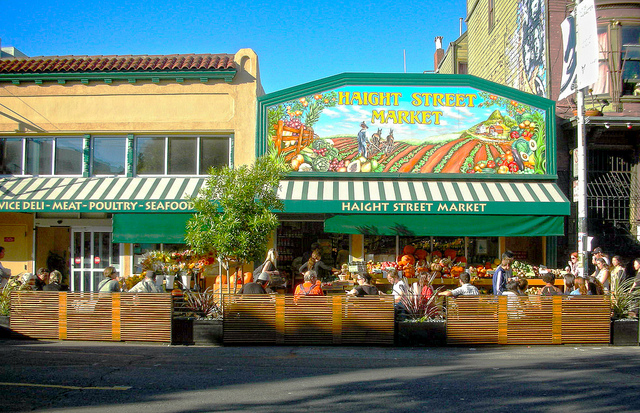 This two-year-old parklet, which livens this section of the Upper Haight near Ashbury Street, creates a pleasant-looking wood-and-greenscape frontispiece for this grocery store and deli. The slatted wood theme makes for a unified whole, and overall, it looks like it belongs, which is more than I can say for a couple dozen of these things around town. - Jay Barmann

The powder-blue bicycles available to ride around San Francisco via the year-old Bay Area Bike Share are precious, indeed: once broken, they will be out of service for a while. You see, thanks

Ask The Foodinista is back to answer all your burning questions regarding San Francisco food. Got a question? Hit us up on Twitter or write us at [email protected] Dear Foodinista, I'm