Vinyl is back. Hell, even cassettes are cool again, so if you're looking to stock up on analog delights, we have the 9 best places to find them. Some of these stores are massive with extensive selections, while others are small and niche, but it's worth checking each out to enhance your music education and diversify your personal collection. Happy hunting!


Aquarius Records
While it's not the biggest record store in San Francisco, Aquarius is the oldest independent store in the city, and also the best curated. The store's owners and employees are unabashed music nerds who take the time to write reviews, list each week's new arrivals, compile year-end favorites (here is 2013's) — and they are super nice, even if the selection can seem obscure and intimidating. This is true music discovery that includes local bands, D.I.Y. artists, and international acts in a variety of genres and spanning many decades. Want to hear Norwegian black metal from the early 90s? This is your place to find it.
1055 Valencia Street 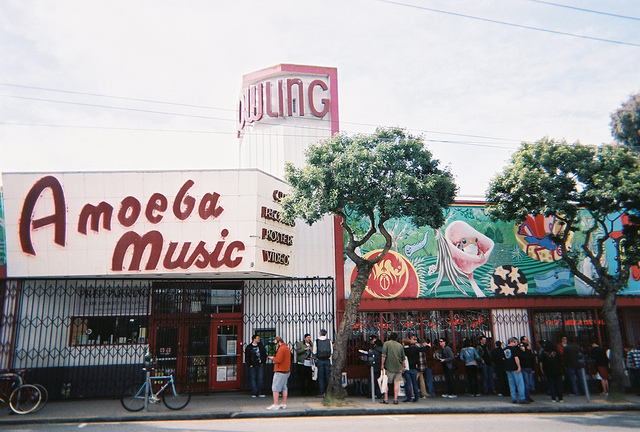 Amoeba Music
When you're looking to act out all your Empire Records fantasies, this is the store to do it at. Amoeba's Haight Street location is a former bowling alley and every square inch is packed with merchandise, making it easy to get lost in for hours and forget what brought you there in the first place. Luckily, everything is pretty well organized by artist and ranges from essentials to the obscure. The vinyl selection includes new, used, clearance, and collectable (be ready to fork over serious cash for the latter), and the few of you who still listen to CDs should head to the deep discount section in the back corner of the store. There are also cassettes, DVD/Blu-ray videos, books, t-shirts, and weekly shows (you can pretend it's Rex Manning...we won't tell).
Multiple locations: 1855 Haight Street; 2455 Telegraph Avenue, Berkeley 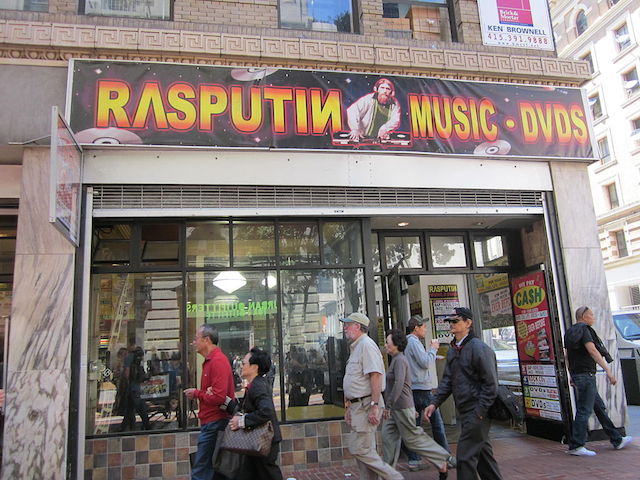 Rasputin Music
The Union Square location smells like Blondie's Pizza and the Berkeley location smells like cookies (Scoop Dreams' ice cream sandwich shop is inside), but you may require such sustenance to dig through the piles of music available here. If you're looking for DVDs, rare CDs, even dusty VHS tapes, the Powell Street and Haight Street stores are your best bet, while the Berkeley store is brimming with great deals on vinyl. Pass the cookies (if you can resist) and head straight to the basement to find almost any genre you're looking for, from classic rock to country to classical. Just be ready to devote at least an hour or two to digging and be sure to check the condition of used records — Rasputin will often have multiple copies of the same record and the lower the cost, the lower the quality.
Multiple locations: 69 Powell Street and 1672 Haight Street; 2401 Telegraph Avenue, Berkeley 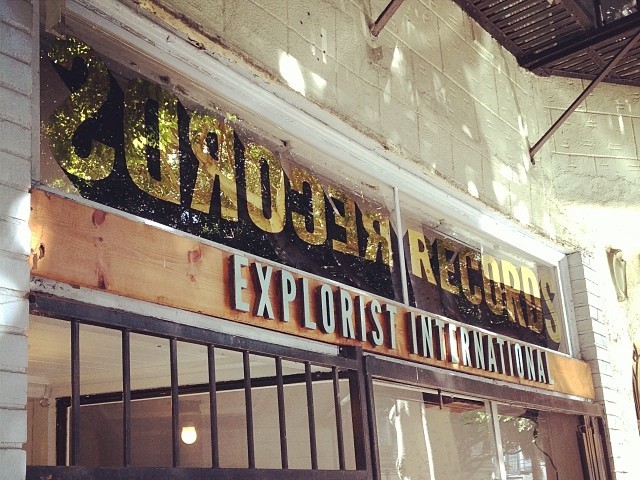 Explorist International Records
Visiting Explorist International Records is like hanging at the house of a crate-digger friend, but a tidy and organized one who has impeccable taste in a wide variety of music. Located in the Mission, Explorist International lives up to its name with a focus on vinyl from all over the world. There is Dub, Afro-funk, Cuban and Latin jazz, French electronic, and roots American music, to name a few. You can also find books and 'zines, cassettes, and vintage electronics. On the first Friday of every month, stop by for Free Jazz Friday, which is "free" in that it costs nothing and features improvised music.
3174 24th Street 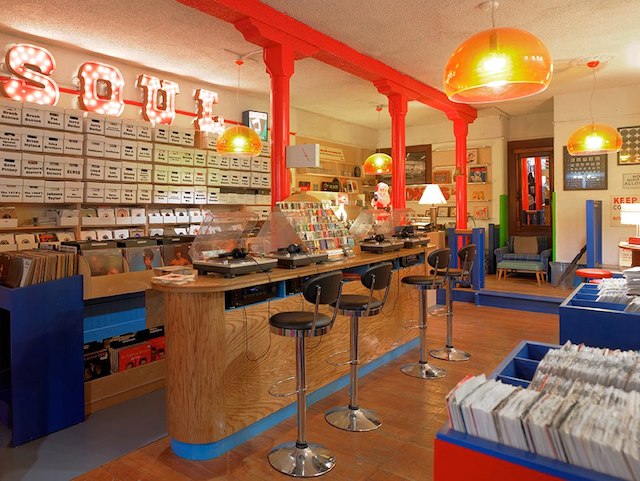 Rooky Ricardo's Records
You may have walked into Rooky Ricardo's after a few pints at Toronado and thought you stumbled into the 1960s. There are vintage posters, toys, rotary phones and — of course — lots of cool, old 45s lining the walls. But if you stick around and talk to owner Dick Vivian, who has run the place for 27 years, you'll likely leave with a few records. The store stocks soul, oldies, and R&B vinyl, focusing on the 60s, 70s, and 80s, and Vivian can tell you about each and every one. Even though it's a small store, it's easy to spend hours there as you can listen to records on turntables with headphones, and the vibe is warm and welcoming (unlike Toronado).
448 Haight Street 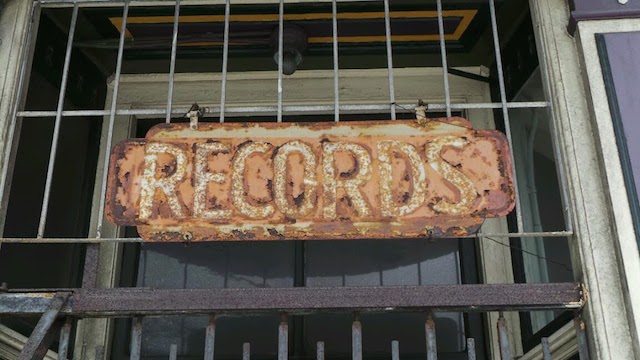 Jack's Record Cellar
Jack's is only open on Saturdays from 2-7 p.m. and only caters to vinyl lovers (no CDs or DVDs), but it's a San Francisco institution that has been selling records since 1951. The store specializes in rare, out-of-print 78s and 45s in a variety of genres including jazz, folk, and country. Tucked in a corner of Page and Scott Streets with just a sign that says "Records" hanging above the door, it's a great place to take music-loving, out-of-towners and impress them with your insider knowledge of the city.
254 Scott Street 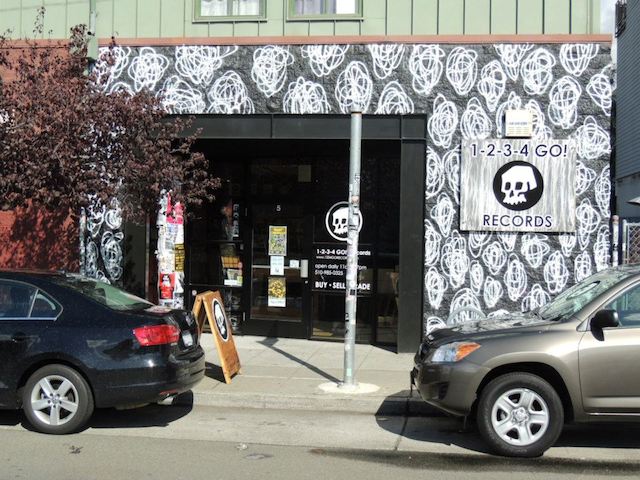 1-2-3-4 Go! Records
What started as a tiny store in Temescal, with an emphasis on selling to fans of the already-established punk label by the same name, has grown into a major presence in the East Bay music scene. Earlier this year, 1-2-3-4 Go! nearly doubled the size of its store by expanding into a next door space, making room for more records, a book and 'zine section, and vinyl accessories. Though punk and indie is well represented in its shelves, the store also stocks plenty of new and used rock, blues, reggae and other world music. They even clean every used record, so you don't have to worry about it skipping when you get home. In the back of the store, local and touring bands regularly perform and admission is usually $10 or under. The bands are always worth checking out, even if you have not heard of them, and maybe you'll catch a surprise guest, like East Bay legends Green Day who played in 2011.
420 40th Street #5, Oakland 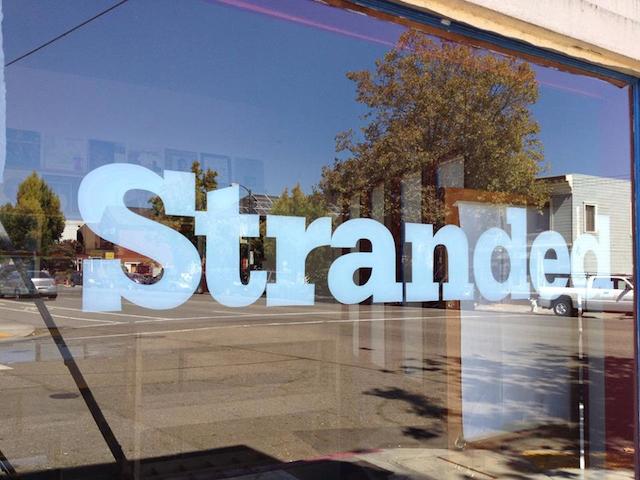 Stranded
Another off-shoot of a local record label, in this case Superior Viaduct, Stranded features an artfully curated collection of music's past and present. Naturally, the store carries Superior Viaduct's excellent releases, mostly reissues and archival compilations from Bay Area underground bands of the late 70s and early 80s, plus stuff like DEVO's previously out-of-print hardcore album. But what people really love is that Stranded stocks records you can't find anywhere else (unless you buy them online...shame on you). That classic Captain Beefheart album you've been searching for all your life? Yeah, they probably have it. Most of these albums are reissues, and thus new records, so don't expect to find rare gems hidden in a bargain bin, but there's still a lot of thrill and surprise in the hunt. The store also regularly hosts performances (I saw Bonnie 'Prince' Billy there for free) and you can check here for an updated listing.
4929 Telegraph Avenue, Oakland 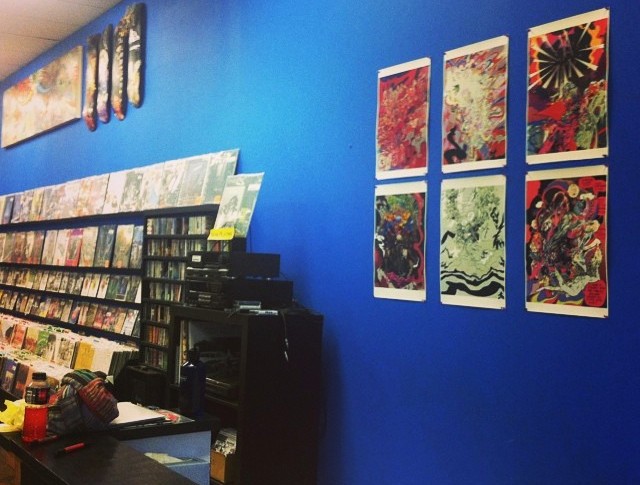 Econo Jam Records
One of the newer record stores in Oakland, Econo Jam packs a lot of great stuff in its small shop, located near the 19th Street BART station. Punk, jazz, and metal fans will find a lot to love, but there's also a decent selection of rock, funk, and experimental records and cassettes. Plus it's a one-stop-shop for folks getting back into vinyl as the store sells new and used turntables and receivers. The art shows, performances, and readings are well-curated and frequent, and you can stay updated on events via their Facebook.
2519 Telegraph Avenue, Oakland (Photo: john daniel reiss)

With the announcement today of the Season 12 cast of Bravo's long-running Top Chef, it seems appropriate to take a moment to look in on a pair of former cheftestants from the Bay

Some of you who watch a lot of TV have likely seen this already, but in her series of funny spots for Old Navy, this has to be Amy Poehler's best. Watch in

—
The 9 Best Record Stores In The Bay Area
Share this