San Francisco is chock full of museums! Some are fantastic, not-to-be missed opportunities, and some are...less so. Here are our ten favorites, excerpted from 100 Things to do in San Francisco Before You Die, an admittedly-morbidly-titled guidebook SFist staffer Eve Batey recently co-authored with local writer Patricia Corrigan.

The California Academy of Sciences
The CalAcademy offers visitors two ways to see exhibits like Claude the albino alligator, its giant Pacific octopus, or its 2.5-acre Living Roof: you can go during the day with the kids, or on Thursday nights from 6-10 p.m., when only adults are allowed to explore the Steinhart Aquarium, the Morrison Planetarium, the Kimball Natural History Museum, and their four-story rainforest, complete with live butterflies. If only more museums offered both options!
55 Music Concourse Drive in Golden Gate Park 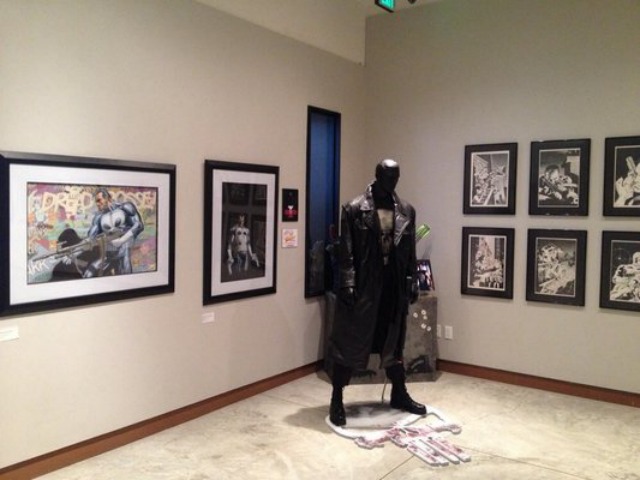 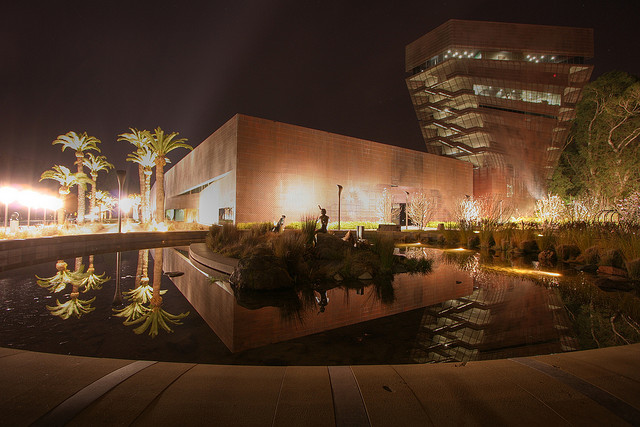 The de Young Museum
The de Young Museum boasts a permanent collection of more than 27,000 works, including painting, sculpture, and decorative arts from the Americas, Africa, and Oceania. Bonus: find the elevator in the east end of the building and ride up, up, up to the Hamon Tower Observation Floor for breathtaking panoramic views of Golden Gate Park, the Golden Gate Bridge, and many a San Francisco neighborhood.
50 Hagiwara Tea Garden Drive in Golden Gate Park 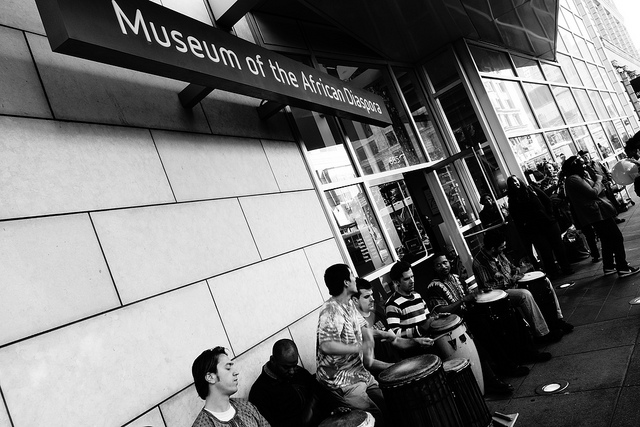 The Museum of the African Diaspora
The distinctive voice of the late Maya Angelou introduces the moving personal stories in the “Slave Narratives” at the Museum of the African Diaspora, where art and technology are perfectly blended in other displays as well. The MoAD is closed for renovations until October, so this summer they're doing a program called MoAD In The Neighborhood in conjunction with other Bay Area arts organizations.
685 Mission Street 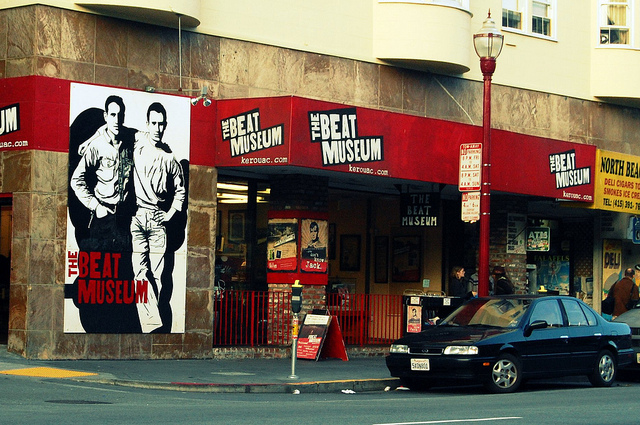 Photo of The Beat Museum by Shubert Ciencia

The Beat Museum
Are you Beat at heart? Are you of the opinion that the single most interesting thing that happened in 1955 was when Allen Ginsberg read his brilliant poem Howl on October 7 at the (now defunct) Six Gallery in San Francisco? If so, the small but mighty Beat Museum awaits your visit. Original manuscripts, first editions, letters, and a handful of personal artifacts from Ginsberg, Jack Kerouac, Neil Cassady, Lawrence Ferlinghetti, and other gifted writers and artists from the Beat Generation are on display in this funky, one-of-a-kind repository.
540 Broadway Street 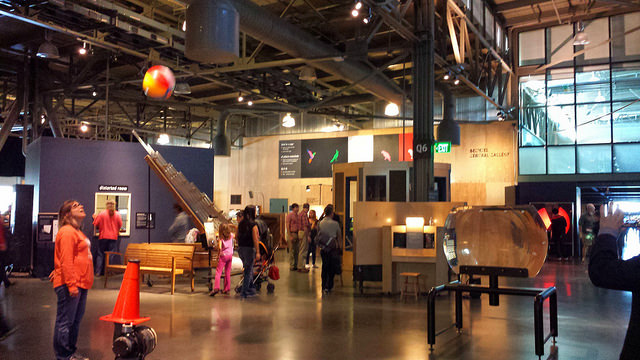 Photo of the Exploratorium by Josh & Karen Tanenbaum

The Exploratorium
The Exploratorium personifies “interactive,” with some six hundred exhibits that encourage visitors of all ages to touch, tinker, and figure out how the world works, all while having fun. With so much going on in one place, the Exploratorium can be overwhelming at first. The six galleries are Light and Sound, Human Behavior, Living Systems, Tinkering, the Outdoor Gallery, and the Bay Observatory Gallery. Just cruise through, and stop to play at any exhibit that grabs your attention.
Pier 15 on the Embarcadero at Green Street 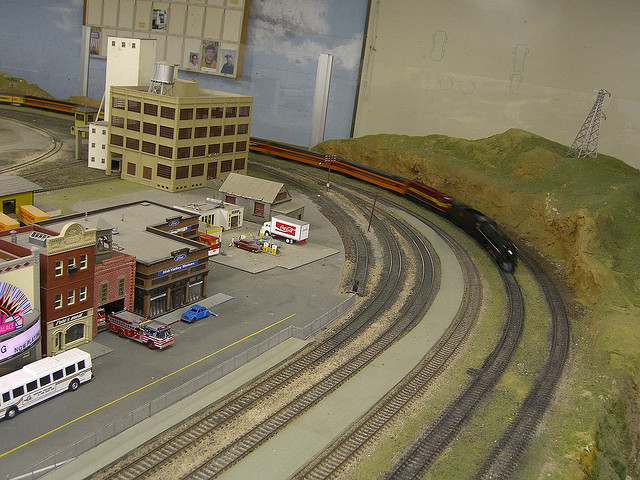 Photo of model trains at the Randall Museum by Mark Hogan

The Randall Museum
Peer at a barn owl, look at a lizard, or talk to a tortoise at the Randall Museum, a free, low-key attraction operated by the SF Recreation and Parks Department. This little gem of a museum features live animals, a Tree House Room for toddlers, a full-size replica of an earthquake refugee shack, and a scale model of a red caboose for kids to climb on. Transit fans note: on Saturdays from 10 a.m. to 4 p.m., on the lower level of the museum, young visitors may guide model trains on the Golden Gate Model Railroad Club's train layout, one of the largest in the Bay Area.
199 Museum Way 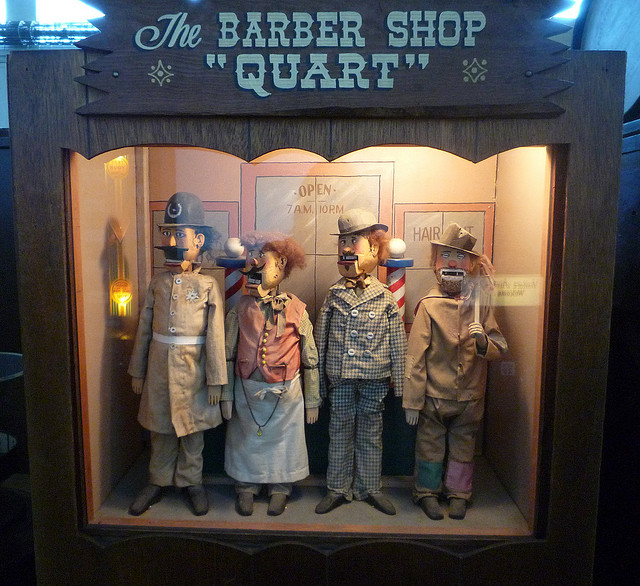 The Musée Mécanique
Life-size puppets will tell your fortune at the Musée Mécanique, a quirky, family-owned interactive museum where kids of all ages can examine hand-cranked musical instruments and penny arcade games from the 20th Century. For as little as a penny and as much as just fifty cents, you also can play any of the more than two hundred games and mechanized displays. (Additional machines are standing by to provide the needed change!) A bit of San Francisco is here too, beloved artifacts from Playland at the Beach, the Sutro Baths, and the Cliff House, which was the Musée's former (and some say, cooler) home. Admission is free.
Shed A on Pier 45 at the foot of Taylor Street on Fisherman's Wharf 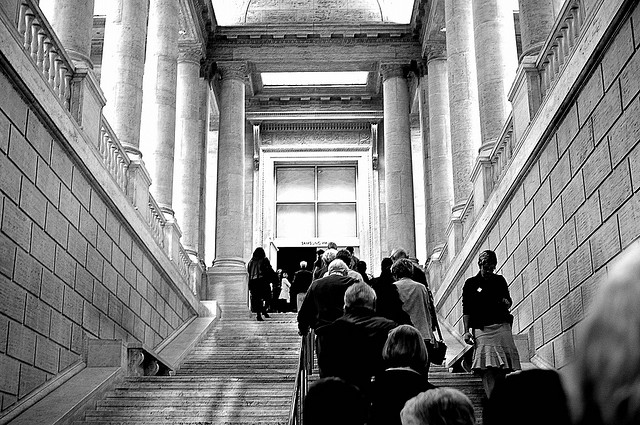 Photo of the Asian Art Museum by Flickr user telmo32

The Asian Art Museum
Longer-time San Franciscans will remember the Asian Art Museum's structure as the former Main SF library, but now visitors are greeted by a statue of Ganesha at the top of a sleek set of glass escalators. Far more than just a collection of scrolls and pottery, the Asian Art Museum caters to all ages, with both traditional displays and new-school, interactive events. Don't miss their teahouse, and be sure to stop in their meditation alcove for a final Om before you go.
200 Larkin Street in Civic Center

The Legion of Honor
A cast of Rodin's "The Thinker" greets you at the stately entrance to the Legion of Honor, which is filled with European paintings and decorative arts, ancient art, photography, and sculpture. Yes, it's a bit stuffier than the other museums on our list, but don't be too quick to dismiss classic, traditional art: it's still with us for a reason. Plus, the Legion of Honor is where Jimmy Stewart creeped on Kim Novak in Vertigo. That, alone, makes it worth a trip.
100 34th Avenue

Photo of a recent exhibit at the Cartoon Art Museum: Rafal N.

The much anticipated new Lower Nob Hill project from chef Ravi Kapur (Boulevard, Prospect) and two of the partners behind Nopa (Allyson Jossel and Jeff Hanak), which we first learned about last fall,

Everything about the new startup ManServants looks like a promo from the latest J Lo or Lady Gaga video, but its founders — two San Francisco women who work in advertising — say it’s