Update: SFist has received official word from the San Francisco Public Utilities Commission that the whole emergency-drinking-water-from-hydrants program was discontinued in recent years due to fears about backflow of unsafe water into the system following an earthquake. It had sounded like designer Scott Kildall, who had been mapping the the hydrants, had done a fair amount of research, but apparently not. Our bad.

Below, the official statement from the SFPUC:

The biggest concern [about getting emergency water from hydrants] is public health and safety. First of all, tapping into a hydrant is dangerous as many are high pressure and can easily cause injury. Some are very high pressure! Second, even the blue water drop hydrants from our old program in 2006 (no longer active) can be contaminated after an earthquake due to back flow, crossed lines, etc. We absolutely do not want the public trying to open these hydrants and they could become sick from drinking the water. They could also tap a non-potable hydrant and become sick if they drink water for fire-fighting use. After an earthquake, we have water quality experts who will assess the safety of hydrants and water from the hydrants before providing it to the public.

AND of course, no way should ANYONE be opening hydrants except SFFD and SFWD; if people are messing with hydrants, this could de-pressurize the system when SFFD needs the water pressure to fight fires, and also will be a further distraction for emergency workers to monitor.

We are in the process of updating our emergency water program... We are also going to be training NERT teams to help assess water after an emergency.

In today's earthquake-preparedness lesson, we teach you about the network of fire hydrants all over San Francisco that have been tied into water mains suitable for drinking, and which you probably didn't know existed. And for everyone (like me) whose earthquake kit does not currently contain the recommended three-days' supply of drinking water, you might want to pay attention.

Designer and Creative Code fellow Scott Kildall has been working on something he's called Water Works, which is an ongoing project to mine data about San Francisco's different water systems, and create visual maps and models from the data. What appears to be his first contribution is this useful map of the 67 hydrants that were connected to S.F.'s potable water supply as part of a 2006 citywide initiative. This is most useful to you personally if you invest in a fire hydrant wrench (which Kildall already did), but it's good nevertheless to know where you might find drinkable water after a natural disaster if the pipes to your house or apartment get severed from the system.

But not every fire hydrant is going to give you potable water as Kildall explains:

The Auxiliary Water Supply System (AWSS) was built in 1908 just after the 1906 San Francisco Earthquake. [Editor's Note: We mentioned it recently after its use in fighting that Mission Bay fire.] It is an entire water system that is dedicated solely to firefighting. 80% of the city was destroyed not by earthquake itself, but by the fires that ravaged the city. The fires rampaged through the city mostly because the water mains collapsed. Just afterwards, the city began construction on a separate infrastructure for combatting future fires. It consists of reservoirs that feed an entire network of pipes to high-pressure fire hydrants and also includes approximately 170 underground cisterns at various intersections in the city. This incredible separate water system is unique to San Francisco.

As part of Kildall's project, he's been trying to create visual models of the cisterns, but the potable water system is separate, and only connected to 67 of the city's hydrants. These hydrants are supposed to be distinguished with a blue teardrop symbol, as shown above, but as Kildall has found, not all of them are. 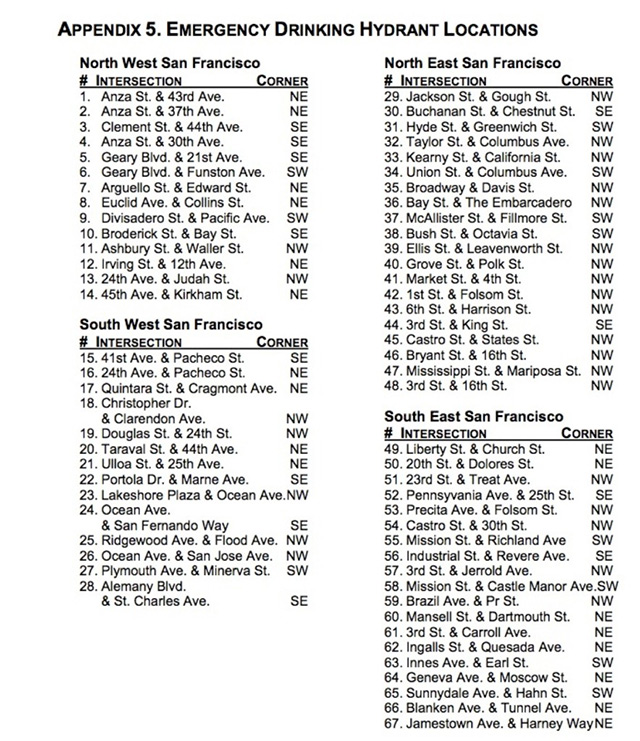 It's been ages since we had some chinchilla-related palate cleansing, so please enjoy these two videos of a chinchilla named Pusch enjoying a piece of dried apple, and then taking a brief dust

Science magazine put transgender sex workers in Jakarta on its cover this month with an objectifying image that cuts off their heads and focuses on their tight dresses, long legs, and high heels.

—
Update: Do Not Try To Find Emergency Drinking Water From Hydrants After An Earthquake
Share this