Back in January, when KitTea announced it would be opening a cat cafe in San Francisco, the news made us weep with joy and sparked national interest. What many didn't know at the time was that two East Bay cat-lovers were also planning a similar concept, called Cat Town Cafe, which officially signed its lease at 2869 Broadway in Oakland yesterday, as reported by Eater SF.

Cat Town Cafe’s Adam Myatt told SFist that they aim to open by Labor Day (September 1). Myatt said the 2,200-square-foot space will be a coffee bar-meets-urban cat utopia where the patrons can either chill with the cats or go a step further and take one home. His co-founder Ann Dunn is the president of Oakland rescue non-profit Cat Town, which will handle adoptions on the days the cafe is closed, likely Mondays and Tuesdays. The kitties will come from the city-run shelter, Oakland Animal Services.

Meanwhile, San Francisco's KitTea is working toward its "tea house oasis for cats," which will have adoptable rescues from Wonder Cat Rescue and Give Me Shelter. When SFist interviewed KitTea’s Courtney Hatt back in January, she said they were looking for a 1,600-square-feet space in Hayes Valley or the Mission.

Based on a recent update from Hatt, it sounds like they’re about to finalize the location. She wrote in an email to SFist: “We are close to announcing some big news e.g. our location very soon. We are holding off on announcements, until the health dept. gives us the thumbs up on our layout for the space.”

Myatt, a local musician and the guy behind those cool Hoodcat calendars, said he and Dunn spent two months negotiating their lease, convincing the landlord “that a cat cafe is a good and positive place.” He estimates construction will take about a month as they divide the space to separate the cafe from where the cats roam, to ensure food safety. In addition, all the food—snacks like pastries and bagels—will be supplied by outside vendors.

In her January interview with SFist, Hatt said “approvals and the correct city permits” were the “biggest hurdle,” which may explain why we don’t yet have a cat cafe in the States. Cat cafes have been popular in Europe and Asia for more than a decade.

Back in April, pet food giant Purina claimed it had opened the first cat cafe in New York City, but it was only a four-day pop-up. Myatt said he’s seen crowdfunding campaigns in Portland, San Diego, Los Angeles, and Florida, but that Cat Town Cafe and KitTea “are miles ahead of everyone.”

Cat Town Cafe raised $40,695 via Indiegogo, received a $10,000 donation from Pet Food Express, and is being funded in part by Cat Town’s Maddie’s Treatable Assistance Program. Cat Town Cafe is a non-profit and insured through Cat Town. KitTea has raised $63,303 so far.

Though they started planning in late 2013, Myatt said he and Dunn got serious in January, setting up the Indiegogo campaign and talking to local press. Then, six days before the official announcement, KitTea revealed its plans to open a cat cafe.

While Myatt admitted that they want to be first, there's plenty of room for both. He said Cat Town Cafe will have a distinctly “weird Oakland” vibe with custom-designed cat beds modeled after Port of Oakland cranes and multi-level cat climbers that look like buildings in downtown Oakland. Authentic Bagel Company and Bicycle Coffee, both in Jack London Square, are on board as vendors.

Cat Town Cafe plans to have 8-12 cats out at any given time and people who want to play with them will have to first review guidelines. “These are cats,” Myatt said. “You could get scratched if you piss them off.” He and Dunn (pictured below) have already started recruiting people to foster cats that might not take to the cafe’s social setting. “We’ll make sure the cats don’t get overwhelmed.” 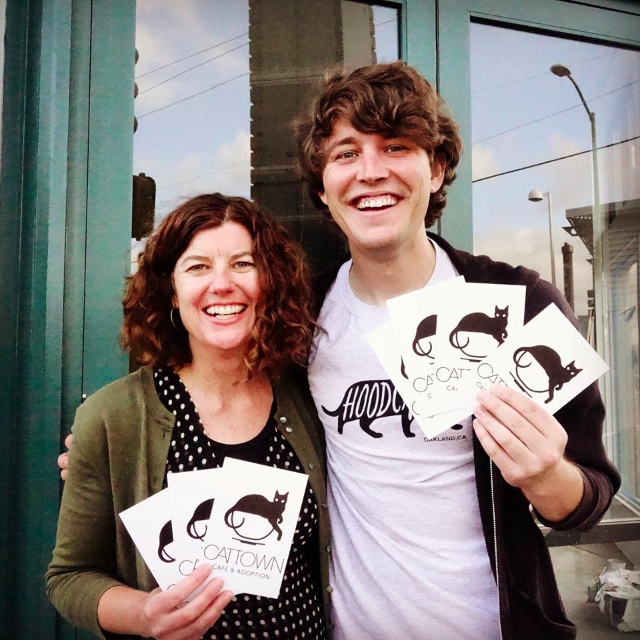 There's a ton of construction going on in Hayes Valley. Here's a rundown. [Hoodline] Sheryl Sandberg says Facebook "never meant to upset you" regarding their experiment that appears to have been intended to

I think we've found the male equivalent of master impressionist songstress Christina Bianco, and it would be downright amazing to see them go head-to-head on stage and do like 30 different duets. Meet