Are you feeling trapped in your railroad-Victorian situation with four roommates you only barely like? Well, if you can just stick it out a little longer, you'll be able to apply for the privilege of living in a 174-square-foot private shoebox all your own — with shared living and dining space — at the corner of Oak and Octavia for around $1,350 a month.

It's a new "CoLiving" development called The Karl from Build Inc. and Zeta Communities, a design-build firm specializing in pre-fab, module-based micro-apartments, and it's about 50-square-feet tinier than the micro-apartments that were being hotly debated two years ago.

As SocketSite notes, the unit designs, which you can see below, are indeed tiny shoeboxes with Murphy beds, kitchenettes, private bathrooms with showers and maybe enough room for a thin person to turn around, and a "flex table" in one corner at which to enjoy lonely dinners for one.

The modern commune aspect comes into play with shared dining and living areas, and full kitchens on the top (fifth) floor, serving each pod of micro-units. There will be 34 units in total, and what looks like four top-floor communal spaces. Also, on the ground level, there will be eight "micro" retail spaces.

I always wondered how they were going to cram housing onto those extremely narrow parcels lining Octavia Boulevard, which formerly lived under the Central Freeway. Now we have the answer: micro everything.

The Karl, on Octavia between Oak and Lily, is still awaiting approvals, and would be open for occupancy in 2017. Joining it along the boulevard is this condo project that's slated for the parcel between Page and Rose, and The Neapolitan, a traditional, five-story apartment building between Page and Lily that will be split between 2-bedrooms of around 600 square feet, and studios averaging 270 square feet.

The condo project is planning to include a ground floor beer hall that will replace the Biergarten, whose days are numbered as all these development lots gets snapped up. Plans for the lot on which the Biergarten sits (Central Freeway Lot L) have not yet been finalized, however.

Under construction and getting close to occupancy already is the striking Stanley Saitowitz-designed 8 Octavia project at Octavia and Market. As Curbed recently reported, those condo units are about to hit the market at somewhere north of $1,000/square foot.

Here's what those micro-units at the Karl are supposed to look like, complete with "Juliet balconies" and fold-away double beds. 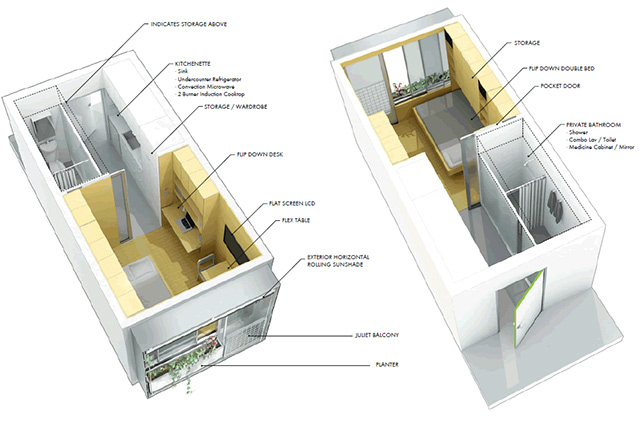 Simply another name for the casual, comfortable style San Francisco has embraced forever, normcore became the fashion meme of 2014 when New York Magazine discovered some trend-setting Brooklyn kids dressed like they came

The Mayor's Office has quickly responded to reports last week that one of the signature aspects of the new Transbay Transit Center  the multi-block, rooftop park and promenade  might have to be scrapped