Sometimes you just need a simple haircut or an old-fashioned shave. Your friends may splurge on expensive stylists, but there are, thankfully, plenty of old-school and old-school-but-new places around S.F. and Oakland where men go to get buzz cuts, fades, and high-and-tights. Below is a subjective list of the best of the bunch.

FELLOW BARBER
This swanky, self-consciously old-timey barbershop in the Mission expanded to San Francisco in 2011. It originally came with a handmade shirt shop in the rear  the brand, originally called FSC, stood for Freeman's Sporting Club  which has now turned into more of an apothecary shop with a few clothing items. Haircuts are typically good, and efficient, though you'll probably be facing a wait of 30 minutes or more during prime time on weekday evenings and weekends. A buzz cut is $20, while a haircut is $40. They'll give you a good, skilled, old-fashioned straight-razor shave for $40 (the shave-and-a-haircut combo is no longer two bits, but $75), and as a bonus, they do a "hangover treatment" for $25, which is based on a traditional barber's facial, with hot towel, etc., and an essential oil treatment.
696 Valencia Street at 18th, 415-621-9000, Open Monday to Saturday 9 a.m. to 9 p.m., and until 6 p.m. on Sunday 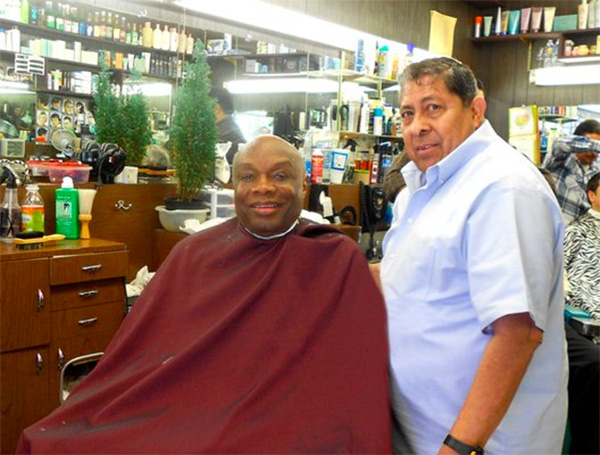 THE ORIGINAL PALACE BARBER SHOP
Willie Brown goes there. That's how old-school it is. What more do you need to know? Their vintage barbershop chairs are, in fact, vintage. Not faux vintage, or recovered, or replicas. There is faux wood paneling. Buzz cuts will run you $20, and a regular cut is $45. You might want to stick to the older guys to be safe, and don't count on anything fancy.
600 Mission Street at New Montgomery, back side of the Palace Hotel. Open daily from 8 a.m. to 8 p.m., but it's 9 a.m. on Sunday 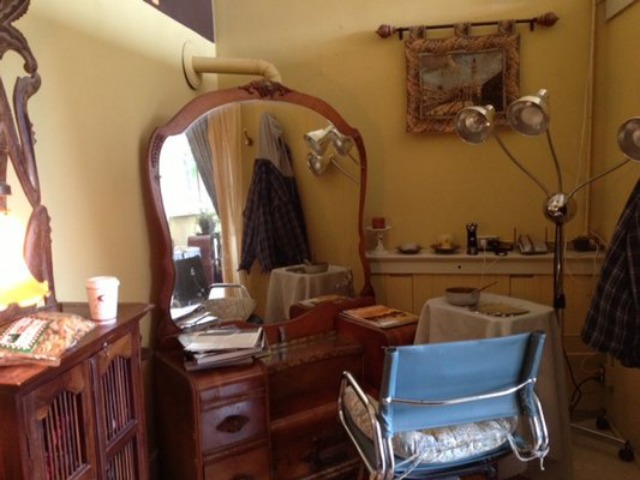 INGLESIDE BARBER SHOP
Described by patrons as "a contemporary take on the old school barber shop," one customer of owner Gary Michaels says he's like the pit bosses Robert DeNiro's character talks about in Casino: "you walk in, he knows your name, what your drink is, and what you like to play." Though Ingleside Barber Shop caters to a wide demographic, it's a favorite among SF natives, many of whom have been going there for decades. And the haircuts are great, too—I even know one local who likes Gary's work so much, he buys everyone he knows gift certificates to the place for Christmas. Now that's a testimonial. — Eve Batey
393 Ashton Ave between Legion Court and Ocean Avenue, 415-584-8997. Hours here. 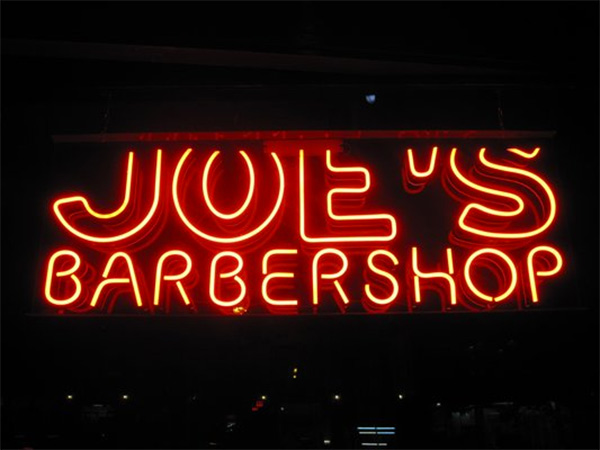 This place has only been around for ten years, five in its current space, and yet it feels like one of those institutions that's been around decades. Serving the Castro and Duboce Triangle, Joe's bounced back after a 2012 fire, and it has a bunch of chairs, meaning it's generally easy to get in without much of a wait. And while this is a predominantly gay barbershop, and some barbers may have some sexy photos by their stations, it's a very mellow, reasonably priced, straight-friendly, and low-key spot that guys shouldn't be afraid of if they're in the 'hood and in need of a cut.
2150 Market Street between Church and Sanchez. 415-255-9096. Hours here. 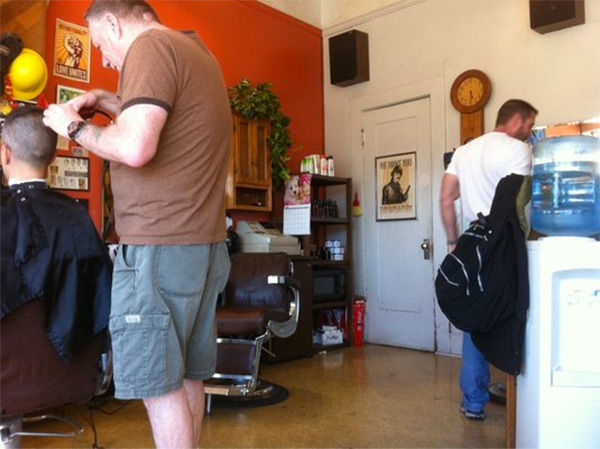 MALE IMAGE
Now if you want a really gay barbershop that serves pretty much solely gay men, this would be it. The place comes complete with sassy service, gossip, Tom of Finland pieces on the walls, and gay porn in the waiting area. It's kind of a glorious throwback to the Castro of the 1970s, long before all those condos went up and before there were so many strollers rolling the neighborhood, and when everyone had mustaches. It's a tiny and popular spot with a loyal clientele, so appointments are definitely recommended, and the Yelp reviews are really pretty hilarious.
2195 Market Street at Sanchez, 415-621-6448. Open 9 a.m. to 10 p.m. weekdays, 9 a.m. to 6 p.m. Saturday, and 11 a.m. to 5 p.m. Sunday. 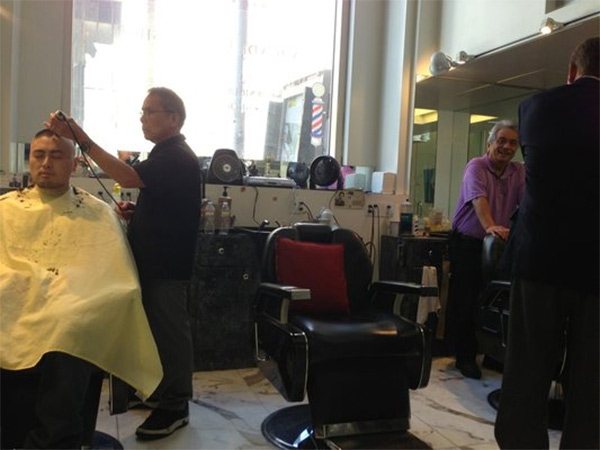 ARCADE BARBERSHOP
This is another older than old school spot, in the heart of the Financial District, where old-guy barbers have been doing their thing for decades. You either want Larry or Jimmy doing the cutting, and you're going to get a little rub-down with a shoulder-massage machine at the end, as well as a nice hot-razor treatment to clean up the line at the back of your neck.
140 Sutter Street between Montgomery and Kearny, 415-956-4049. Open Monday to Friday, 8 a.m. to 6 p.m. 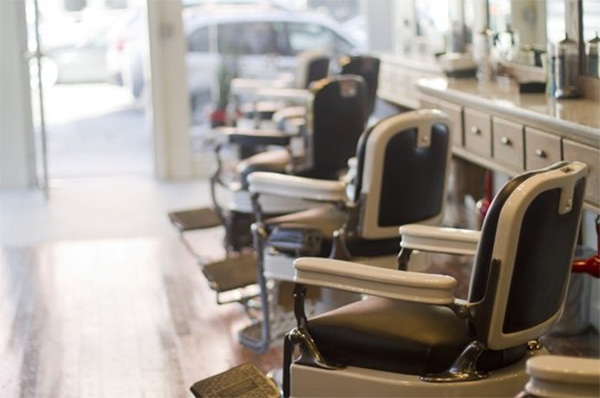 PEOPLES BARBER & SHOP
One of the newest kids on the barber scene is this spot in the Tenderloin/Polk Gulch, which is both new-school and old-school at once, kind of like Fellow Barber. They do the full regime, with hot towels and shaves and the rest, and while you wait you might be handed an Anchor Steam, so that's nice. Guys love this place, by and large, and they even made sure to get one of those striped barber poles to stick out front. So you know it's legit. Appointments recommended.
1259 Polk Street at Bush, 415-292-4099. Open Monday to Friday, 10 a.m. to 8 p.m., and until 7 p.m. on weekends 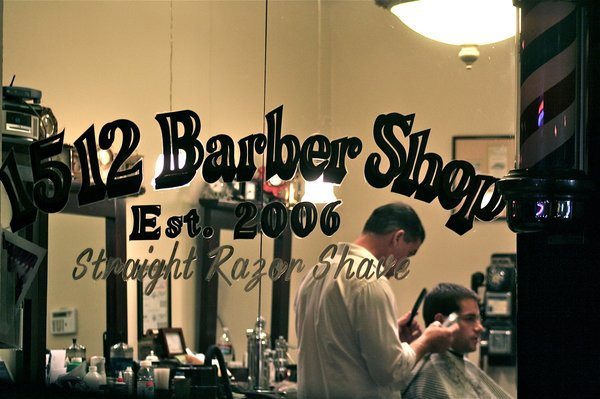 1512 BARBER SHOP
Yet another in the everything-old-is-new-again camp, except this one is run by third-generation master barber Salvatore Cimino. Cimino's not only kept up the family tradition of excellent cuts and shaves, he's also taken after his grandfather who was a bootlegger once upon a time, making his own wine and grappa. He's been distilling rye and whiskey in the back of the shop, making some excellent stuff that sells for a lot of money in fine liquor stores, and if you ask nicely he might give you a taste after your cut.
1512 Pine Street at Polk, 415-286-4371, Open 10 a.m. to 7 p.m. 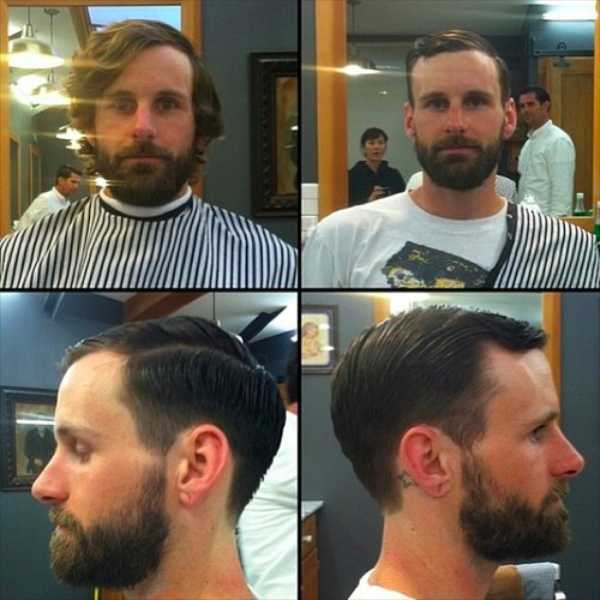 The Coachella kids think it’s hip, someone at Elle U.K. thought it was cool for Pharrell Williams to wear one, and the daughter of Oklahoma Gov. Mary Fallin posed in one

For the second time in less than a year, SF Giants pitcher Tim Lincecum refused to allow a single hit. Not a one. Today's game at AT&T Park was the final