In space formerly occupied by the The Wax Museum at Fisherman's Wharf, something called The Dungeon is opening on June 26, bringing a popular European tourist attraction to our shores for the first time, with an all-San Francisco historical theme. It sounds like part interactive theater, part Pirates of the Caribbean, with an "underground boat ride," nine actor-lead shows in an hour-long walk-through experience, with 360-degree sets, all focusing on San Francisco history from the Gold Rush to Alcatraz. And despite the name, Kink.com was not involved.

There are fictional characters like Miss Piggott, the Wild West saloon owner, and some based on real criminals like infamous crimper, James "Shanghai" Kelly, who used to drug unsuspecting young men and throw them aboard understaffed ships for profit. Apparently there will also be a trip through the "lost mines of Sutter's Mill."

All of it looks to have a "sinister" feel, and it's modeled after other Dungeons throughout Europe, all regionally themed, like the London Dungeon that features scenes based on Jack the Ripper, murderous king Henry VIII, and Guy Fawkes.

The public opening of the SF Dungeon, with an entrance between the new Madame Tussaud's and the Rainforest Cafe, will be June 26.

But there are tickets still available here for their sneak preview day on Sunday, June 22, which are only $19  $7 off the regular admission price of $26. Also it looks like you can buy online combo tickets to Madame Tussaud's (also owned by the same Merlin Entertainments Group) and The Dungeon for $42, $30 for children, but be warned that that only applies to children ages 10 to 12, because those under 10 are "discouraged" from going in The Dungeon, because of the dark nature of the experience.

This kind of reminds me of The Speakeasy, that immersive, interactive theater thing they're doing about Prohibition-era San Francisco, only The Dungeon will probably be a little less cerebral. And a lot less musical.

Still: kind of awesome in a Halloween-y funhouse sort of way! 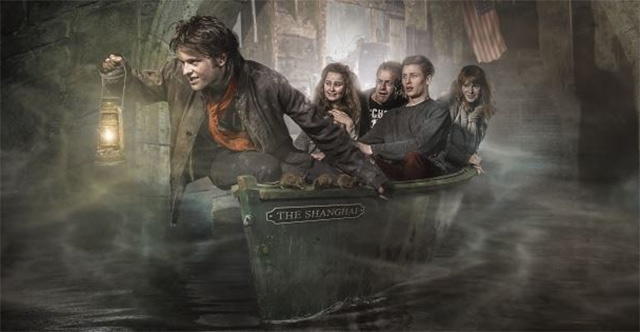 Faster than you can say "grilled-cheese cake," there's a food truck breezing through town tonight that is all mashups, all the time. It's called the Frankenfood truck, and it comes to us via

Remember when the argument was cabs vs Uber? Well, there's a new player in the game, and Uber's drivers sure don't like it. Sometimes the fall from the cutting edge can be the