Mayor Lee and billionaire Ron Conway are pulling out whatever stops they can to keep George Lucas from decamping to Chicago with his illustration (and whatever) museum, as he's threatened to do, and earlier this week Lucas and his development team were taken on tours of several potential development sites that included Piers 30-32 and Seawall Lot 330, the properties that the Warriors were, until recently, planning to build their arena and condo project on. As Matier and Ross report, the Lucas team was "especially impressed with both the seawall lot and Piers 30-32," but Lucas won't be making any decisions until they know exactly what the city is offering.

Also, in today's Chronicle, Conway's SF.citi lobbying group paid for a full-page ad that's an open letter (see below) from Mayor Lee to George Lucas, and signed by all the living former mayors as well as Nancy Pelosi, Sean Parker, MC Hammer, and a couple hundred other people. The non-boldface names are a "partial list" of the people who have signed this petition, which you can sign too, to keep the Lucas Cultural Arts Museum here in town.

The backstory here is that Lucas has been wanting to build a museum on Presidio Trust land across from Chrissy Field, overlooking the Bay, for quite some time. The museum would house his extensive personal collection of American book and magazine illustrations, some by big names like Maxfield Parrish and Norman Rockwell, as well as digital art and a collection of Hollywood memorabilia. Mayor Lee has been all for the plan from the get-go, but the Presidio Trust wasn't having it  in part because they're architecture snobs and in part because they decided to nix all the proposals for the land where Sports Basement now sits, claiming none of them were right for the landmark site. Lucas, who already was entertaining a Chicago plan because it's the part-time home of his new wife Mellody Hobson.

The museum is estimated to be a $700 million project, and it would house a collection worth an estimated $1 billion. Lucas is planning to fund the construction with his own money.

The seawall lot, which sits across the Embarcadero from Piers 30-32 and which the Warriors owners planned to develop with some tall condos that Art Agnos was ready to go to war over, sounds like it makes the most sense for the museum project. The lot could potentially house a 200,000- to 300,000-square-foot museum, twice the size of the Spanish revival thing Lucas wanted to build in the Presidio. But will he hold out for the more glamorous pier site, just because?

Below, the letter from Lee that appears in today's paper. We shall see how this all pans out, or if Chicago's going to manage to offer Lucas something more generous or enticing. 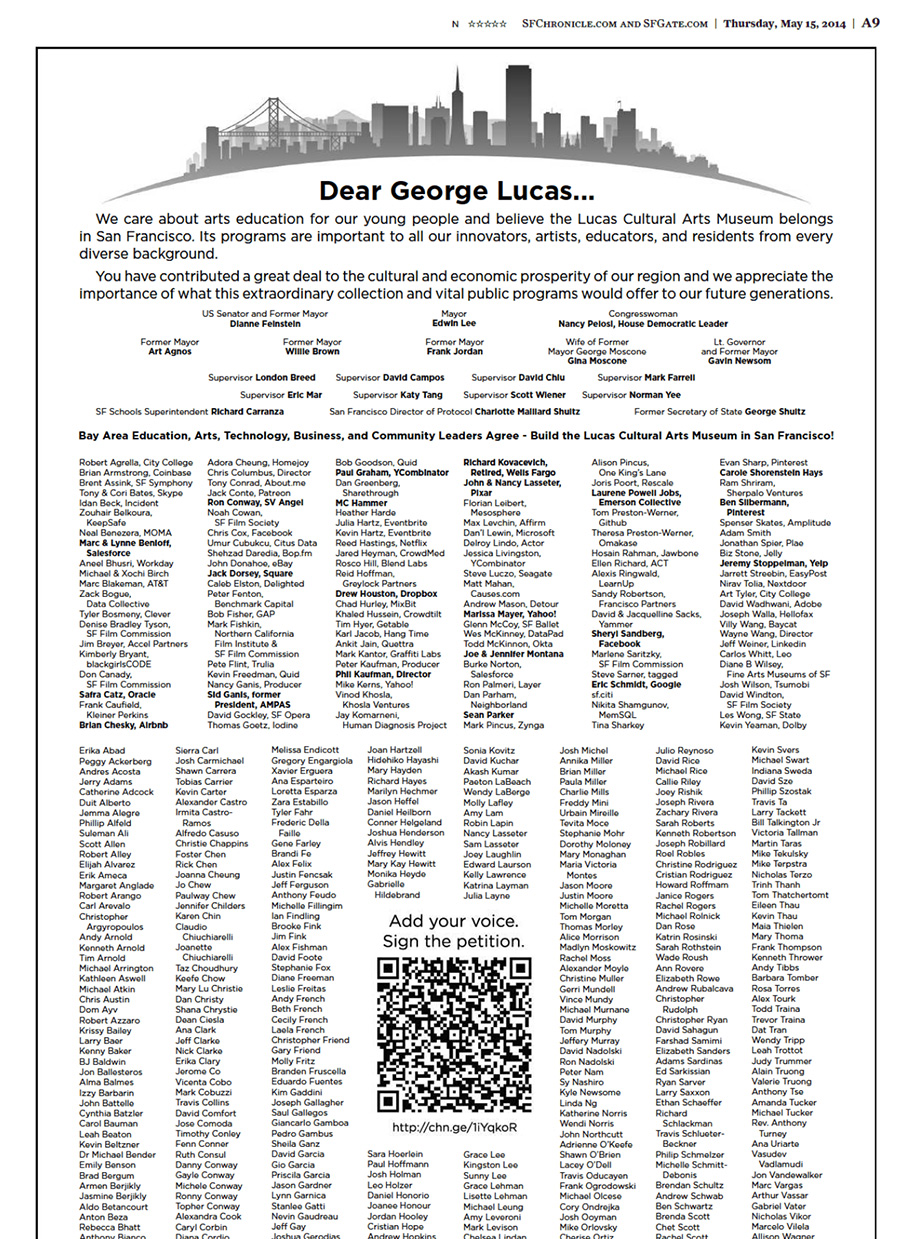 A controversial crack pipe exchange program has turned out to be something of a rocky success story. Intended to reduce HIV transmission among crack smokers and supported by the city’s HIV Prevention