Animal Care & Control spokesperson Deb Campbell confirms the return of the tainted meat, noting that "the meatballs were well-hidden in bushes and shrubbery, and the highest concentration were found in the vicinity of Crestline Drive and Parkridge Drive."

San Francisco Animal Control Officers spent four hours this morning scouring a Twin Peaks neighborhood for poisoned meatballs that could sicken or kill pets. Lieutenant BonGiovanni of San Francisco Animal Care & Control discovered twenty-one meatballs that appear similar to ones found last summer in the same location. The meatballs were well-hidden in bushes and shrubbery, and the highest concentration were found in the vicinity of Crestline Drive and Parkridge Drive. Animal Control Officers posted over fifty warning signs in the area to alert pet owners to the situation.

Animal Care & Control officials are not aware of any pets that have been sickened or killed by the meatballs, but they are not 100% certain that all of the poisoned meatballs have been recovered. Animal Control Officers are encouraging pet owners to keep cats indoors and dogs on a short leash - and away from shrubbery - until the situation is resolved. The San Francisco Police Department is asking the public for assistance. If anyone has information that could help the investigation, they are encouraged to call the SFPD anonymous tip line at (415) 575-4444.

We're getting word from a Twin Peaks resident that poisoned meatballs, which injured at least three dogs, are possibly back. The latest alleged sighting was at 80 Crestline.

While, yes, this story is still in the unconfirmed stages, SFist thought it would be best to let you know in case it's real and you plan on taking your pooch for a walk in the area tonight. 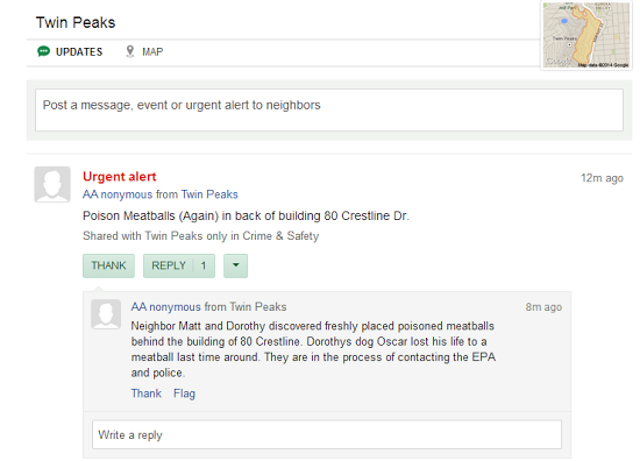 Following are meatballs plucked from he sidewalk last June: 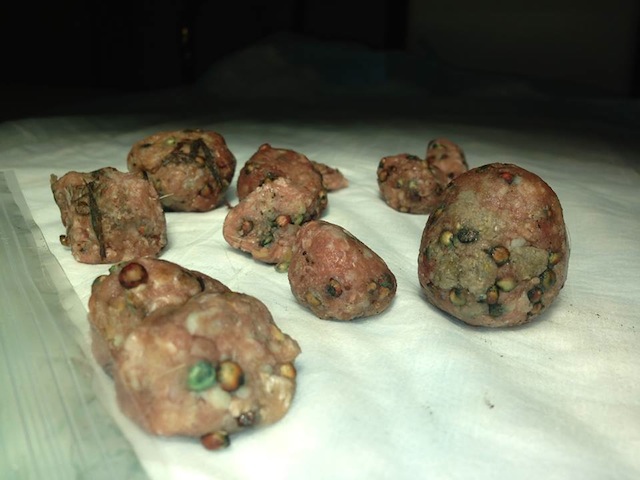 @KTVU FYI possibly poisoned meatballs found again in Twin Peaks today by two of my neighbors. EPA and Police are being notified.

SFist has contacted SFPD for more info. We'll update as soon as we hear more.

When the tainted treats began to appear in Twin Peaks, vets suspect that the meatballs are tainted with strychnine, a rat poison. Strychnine can causes seizures and muscle spasms 10 to 120 minutes after ingestion.

Any suspicious activity or tips about anyone trying to poising pets should call the SF Police Department's anonymous tip line at (415) 575-4444.

Picture of the meatballs found on Wednesday.

Thursday afternoon at the headquarters of Cedarville Rancheria Northern Paiute, a federally recognized tribe near the Oregon border, 44-year-old former tribal leader Cherie Lash Rhoades opened fire during an eviction hearing that could

We would like to take a moment to thank this week's advertisers on SFist. Mercedes-Benz. Check out the redesigned 2014 E-Class. Mixology. One bar. One night. Ten single people. Welcome to Mix. Premieres