A 6’3” Tall, 160-170 Pound Baby
The SF Zoo announced this week that one of their tower of reticulated giraffes (that's really what you call a group of giraffes, a "tower." How great is that?) gave birth to a 6’3” tall, 160-170 female on February 6 at around 8 AM. She's already hanging out for you to visit at the Osher Family Giraffe Lodge, because giraffes don't mess around.

Bosco The Retired Police Dog Fights Cancer
Bosco, who has devoted his life to participating in school demonstration with the Rohnert Park Police Department, is a tough guy with a soft heart. "He is a lovey dog and everyone that meets him is so surprised he is a trained attack dog!" guardian Sharon Walter says.

Bosco's since retired, and was recently diagnosed with cancer. He had surgery last week and is reportedly doing well, but the Walters could use some help with the medical expenses. At publication time, they've raised $3,910, but anyone who's cared for an ailing pet knows that that's just a drop in the bucket. You can donate here. 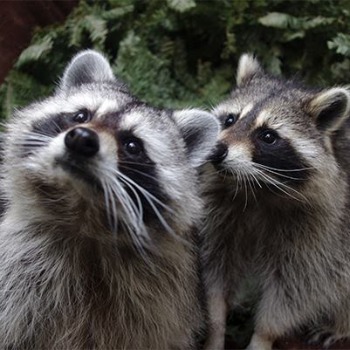 Merlin's new buddies, Pebbles and Tilly. Photo: CuriOdyssey/Facebook
Super Old Raccoon Gets Roommates
Merlin the raccoon is basically Hugh Hefner, except way cuter (low bar). Most raccoons only survive in captivity until age 11 or 12, Merlin's nearly 14, which means that next month he'll be "the oldest raccoon ever on record in California and will break the record for the current oldest raccoon in North America," reports the Chron.

In the wild, raccoons only live for three or four years, so he's especially aged compared to the guys you see rooting through your trash or trundling along Fulton. He's spent most of his long life at CuriOdyssey wildlife center in San Mateo, where staffers there hope he'll help visitors understand that raccoons are "no more vicious or destructive than any other wild animal - they've just adapted very well to city life."

This week they're going to help Merlin sharpen his social skills by giving him two far younger female raccoons, Tilly and Pebbles (pictured right) as roommates. Hence the Hef comparison!

You can see the gang at CuriOdyssey during business hours.

Police are asking help finding Kevin Briggs, a convicted felon and registered sex offender, who violently assaulted a female and police officer in Montana. Briggs was seen in San Francisco, Berkeley, and Oakland

After a brief test run last year, noted toast emporium The Mill on Divisadero has announced they'll be expanding their lineup of doughy items when they roll out a weekly pizza night every