The man seen on an already-viral video posted by the San Francisco Bay Guardian has been identified as Max Bell Alper, a self-proclaimed "organizer and artist" with the Making Change Media Collective and Unite Here. 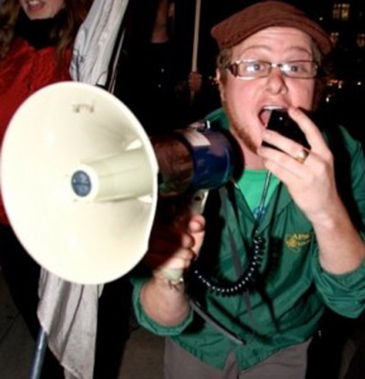 He first started doing theater in house shows in Evanston, Illinois with an alternative teenage performance group he co-founded called Theater of the Awkward. Years later, the group transitioned to producing multi-media zines, which collected themed creative projects from around the country. For the past 8 years, Max has been working as a union organizer with University of California workers, primarily organizing with contracted-out and non-union, low-wage service & office workers. Recently, he co-founded a radical local historical reenactment project called the Oakland 46ers. He has traveled extensively in Latin America, and recently returned from a 6 month bicycle trip in Europe.

On Twitter, astute local reporter Susie Cagle, called out Max's identity, pointing out that local news media, progressive ones especially, should be acquainted with him:

In fact, the Guardian itself (whose site has apparently crashed under the surge in traffic today) quoted Alper at length in a 2011 post about Occupy San Francisco he was also interviewed by Mother Jones' Gavin Aronsen after his arrest at Occupy Oakland around the same time. In the Guardian piece, Alper told the progressive paper that his parents home was foreclosed, his uncle's home was foreclosed and his grandmother's home was also facing foreclosure. For what it's worth (which is not much at this point), Alper's bio also says he was "born in a castle in central eastern Illinois to juggler parents."

Today, it seems, he just created a circus of his own.

Update: In an update to their own story, the Guardian asked Alper what motivated him to impersonate a Google employee. Alper called his performance, "improv political theater," and explained: "This is political theater to demonstrate what is happening to the city. It's about more than just the bus. These are enormous corporations that are investing in this community. These companies, like Google, should be proud of where they're from and invest in their communities."

Before his staged street theater rant, Alper reportedly stepped off the Google Bus and claimed he was late for work. Later he claimed he "spontaneously" decided to stage the argument. Protest organizer Leslie Dryer told the Guardian she was unaware that such a performance had been planned.

Am I the new Batkid?

Previously: 'This Is A City For The Right Kind Of People,' Screams (FAKE) Google Employee To Protester

(By Daisy Barringer) All I can say is thank God. The 49ers defeated the Seahawks 19-17 allowing us to keep our final playoff spot and, more important, our pride and momentum. Sure, as

It's sounding like everyone's been a little overly optimistic about how the city of Santa Clara is going to handle the estimated 18,000+ cars that will arrive in town on game days