Terrestrial radio is dead, but streaming stuff over the Internet is doing just great. Case in point: locally sourced underground radio station BFF.fm is officially hitting the WiFi-enabled airwaves and data plans everywhere starting at tonight's with launch party show at Bottom of the Hill.

The brainchild of director and lead DJ Cosmic Amanda, the station actually soft launched a couple months back out of the Secret Alley on Capp street and has been quickly gaining momentum ever since. With two profiles in The Bold Italic and San Francisco Magazine, the station is already growing beyond underground music and specialty programming now ranges from local garage rock to electronica to decade-specific shows to talk radio.

And speaking of talk radio: BFF.fm has lined up some of your favorite local Internet personalities to queue up some tracks and talk shop with you. The station lineup already includes the man behind the mask at Burrito Justice, Allan Hough of Mission Mission, Kevin Montgomery of Uptown Almanac and yours truly from SFist.

Tonight at the official launch party, you'll get your chance to come out and support local independent radio with the station's DJs, fellow music buffs and some musical friends from local bands the Happy Hollows, Kitten Grenade and Deep Dimension.

In the meantime, check the schedule and tune in live at BFF.fm 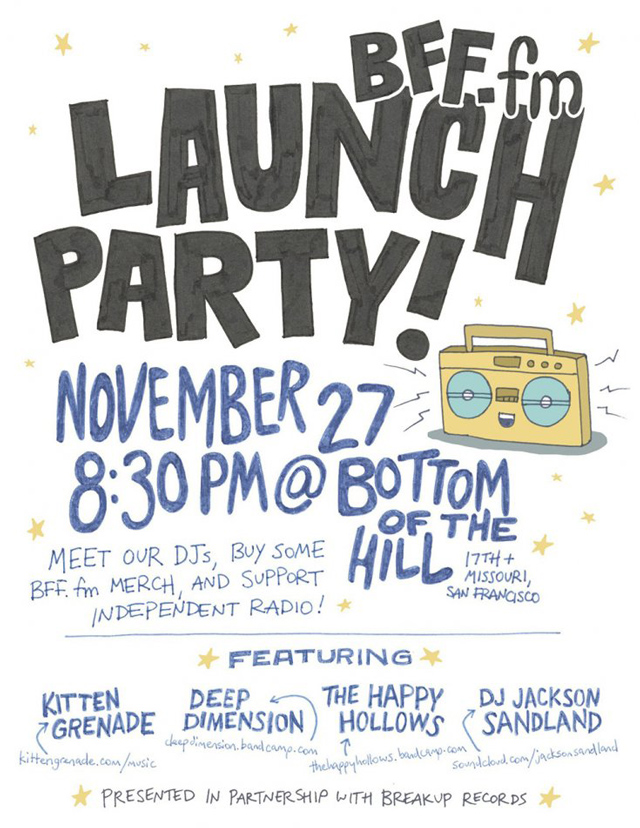 San Francisco Mayor George Moscone and Supervisor Harvey Milk were assassinated 35 years ago today. To mark the occasion, a candlelight vigil will start at Milk Plaza at 7pm followed by a candlelight

A terrifying collection of birds on the Embarcadero, as seen by Steven Bracco.

—
Go Hear This Tonight: BFF.fm Launch Party At Bottom Of The Hill
Share this