Today SFMOMA unveiled some new designs from Snohetta, the architecture firm that designed their big new white addition that's just barely under construction, to reconfigure the main staircase in the original Third Street atrium. The idea is to introduce "the visitor to the language of the new spaces" with this new element in the old space, and to "allow a more direct experience of natural light streaming down from the oculus, which will be visible as a complete circle for the first time."

This means that the dark central stair to the second floor goes away, and so does that bridge on the fifth floor that crossed beneath the oculus. The new, cantilevered stairway hovers just in front of the two art walls that will feature rotating installations, the first of which is still to be announced (the Sol Lewitt paintings pictured were done on those walls in years past). 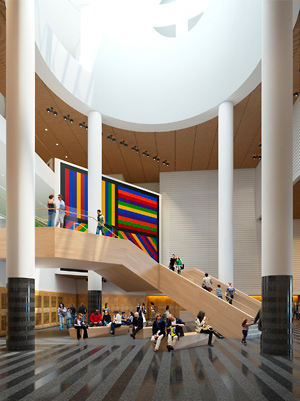 It's unclear to what extent the Third Street entrance in Mario Botta's original museum building will still be used, since the main entrance is getting moved to the new Snohetta-designed space off of Howard Street, but it is still going to be used somehow and there will now be multiple entrance points and "gathering spaces" at street level.

(By Daisy Barringer) The 6-3 Niners travel to the Big Easy to face off against the 7-2 New Orleans Saints in the (stupid) Superdome on Sunday. (No, I’m not over the Super

You can breathe a sigh of relief, San Francisco, as young, yet oh-so strong, Batkid Miles saved the day. Here now are pics showing what went down after Make-A-Wish turned Baghdad by the