With Halloween starting early this year, the Internet is already flooding with reports of woefully ill-informed and downright racist costumes. There was misplaced Orange is the New Black fandom in LA and this offensive disaster in Massachusetts, but for a spooky (read: not spooky) take on one of the Bay Area's biggest news stories of the year, these three fellows decided to dress up as the fake pilots named in the wake of the Asiana Airlines Flight 214 disaster. 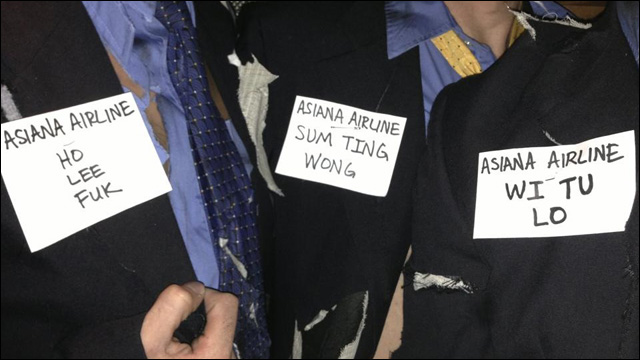 The three men were spotted at the Sidetrack Video Bar in Chicago over the weekend, where a bystander snapped the above photo and sent it along to Angry Asian Man. In case you're having a hard time reading the name badges pinned to their torn and bloodied pilot outfits, they are three of the same names that infamously appeared during a live broadcast on KTVU, including: "Ho Lee Fuk," "Sum Ting Wong," and "Wi Tu Lo."

The names were believed to have come from an ex-pilot source and the incident ended in three people being fired from the station, but apparently that wasn't enough to make these guys wonder if, maybe, just maybe, their group costume was a bad idea. Or as Angry Asian Man puts it: "Just when you think you've seen all the bad taste you can take, a photo like this comes my way, taking that shit to new heights."

Update: A reader sends along another Asiana Airlines pilot costume, spotted over the weekend at a party at Montbleu Casino and Resort in Lake Tahoe:

A new piece in the Chron about the "gig economy" is another depressing sign that if you're not a doctor, lawyer, video game designer, or tech millionaire, you're probably suffering through some indentured

Do you remember where you were when Buster Posey ran into the arms of Sergio Romo? A golden night, wasn't it? (Except for.) One year later, the Giants sank to 4th tied for