Following up on Monday afternoon's standoff at Embarcadero Four: the Examiner confirms this morning that the suspect was indeed the very same man who climbed a light pole and took off his pants on Friday afternoon. The man's identity is not being released at this time, but yesterday's standoff went even longer, starting around 3 p.m. and lasting until after Midnight last night.

According to the Examiner, the man was armed with a knife and some concrete blocks he picked up form the planters on the second-floor plaza. He threatened to jump from the ledge overlooking the pedestrian square on Sacramento Lane between the Embarcadero Center and the Hyatt next door, forcing police to close parts of Embarcadero Three and Four.

Other witnesses in the area, who have taken to calling him "Drumm Street Jesus," say the man smashed out two windows above LOFT, a women's clothing store in the mini-mall/office park. Roughly 30 police officers, an SFFD light truck and paramedics all responded to the scene as police negotiators tried to talk him off the ledge above a Coffee Bean & Tea Leaf. 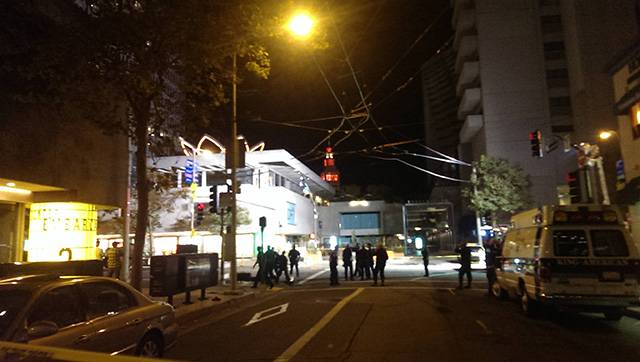 As we noted Friday, the man was taken to San Francisco General's psych ward after the initial incident. He was later released with no charges. This time around he'll face several felony and misdemeanor charges including assault with a deadly weapon, vandalism, trespassing, delaying a peace officer and brandishing a knife.

The owner of a boat-fuel dock in the Marina says that an attempted arson at her business could have been tied to September 11. But it also might have been coincidental and just

Photo by Troy Holden, snapped along Market Street near Powell.