Earlier this afternoon around 2:15 p.m., a female male victim was reportedly shot on a 19-Polk bus in the area of 25th and Wisconsin Streets in Potrero Hill. According to an early report from KTVU, the Muni bus driver drove the victim to San Francisco General Hospital to be treated. [See updates below.]

No word yet on potential suspects or the victim's condition, but we will, of course, update you when we know more.

Update 3:15 p.m.: According to SFPD Sgt. Dennis Toomer, the shots were fired from outside the bus and struck the female victim on board. There are three male suspects, all of whom were on the bus before they opened fire.

The Muni driver reportedly took the entire bus, passengers and all, to S.F. General. The victim's condition is still unknown, but the suspects are described as three black men all about six feet tall.

Wisconsin Street from 25th to Carolina Streets is currently shut down while SFPD investigates. The 19-Polk is also being re-routed around the scene.

Update 3:30 p.m.: KTVU reports the three suspects also boarded the bus in the area of the shooting. The Examiner is now reporting the bus was blocked off and surrounded by crime tape at S.F. General. No arrests had been made as of 2:45 p.m. this afternoon, although SFPD's gang task force is investigating.

Update 3:45 p.m.: ABC7 and CBS5 have a slightly different version of the story. According to a woman, the victim was actually her son. And a bus was still at the intersection of 25th and Wisconsin around 3 p.m. with two bullet holes in the back window. KTVU has also updated their story, saying the victim was a male and his injuries are not life-threatening.

UPDATE: Woman says her son was the victim in a shooting on Muni bus at 25th and Wisconsin in SF: twitter.com/abc7newsBayAre

The scene in Potrero Hill from the air, via CBS5's helicopter footage: 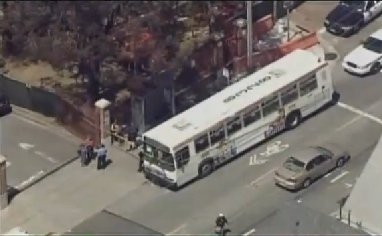 Just after 3 p.m. this afternoon, a 22-year-old man decided he would join the famous Fisherman's Wharf sea lions for a chilly swim in the bay near Pier 39. The San Francisco