Fans of classic TV will remember Eddie Haskell from “Leave It To Beaver”. Making mischief, getting his friends in trouble, sucking up to their parents as if he were the nicest boy who ever lived.

If the writers had cast Eddie as the bad guy in a crime show instead of a sitcom, he might have resembled Trent Mays. He’s one of two teenagers convicted in juvenile court Sunday of digital penetration (which in Ohio constitutes rape) of an intoxicated 16-year-old girl in Steubenville last August.

We won't even touch SFGate's bizarre need to mention "digital penetration" and what constitutes rape. But we will say that Trent Mays and Ma’Lik Richmond are not lovable scamps getting into mischief because boys will be boys. They are rapists. They made the conscious decision to rape a woman. They [Ed. note: In this case Mays] made a conscious decision to brag about it online. They cried in court, after their guilty verdict was read aloud, because they were sad about the end of their futures. They did not cry with guilt or disgust about raping their victim repeatedly.

If you must, go here for more. 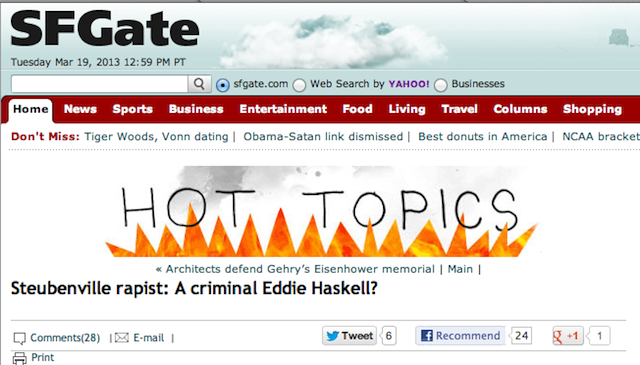 UPDATE II: Vlae has responded to the criticism with the following (confusing) statement:

"Some people seem to have misunderstood my point. Mays presented himself to adults far differently than to his friends. I used a TV character many people would remember to illustrate the insincerity of his text to the victim's father. The string of text messages linked below amply demonstrates how abominably he acted toward the victim, who should have everyone’s support."

"Did you do any research on me whatsoever? I'd rather just talk about what you really want to know" French Laundry chef Thomas Keller delightfully quips in a recent interview with Huffington Post