Matthew Keys, the Thomson Reuters employee accused of conspiring with members of the Anonymous hacker collective, has been suspended by the noted media company. Reuters reporters Joseph Menn and Dan Levine filed their own report about the story last night, confirming that Keys' workstation had been "dismantled and that his security pass had been deactivated."

Keys is accused of handing over login information for Tribune Company systems to members of Anonymous, who used the information to modify at least one news story on the L.A. Times website. Gawker tracked down a two-year-old screenshot posted on Reddit noting, it "looks like anonymous has gotten into the L.A. Times web site." 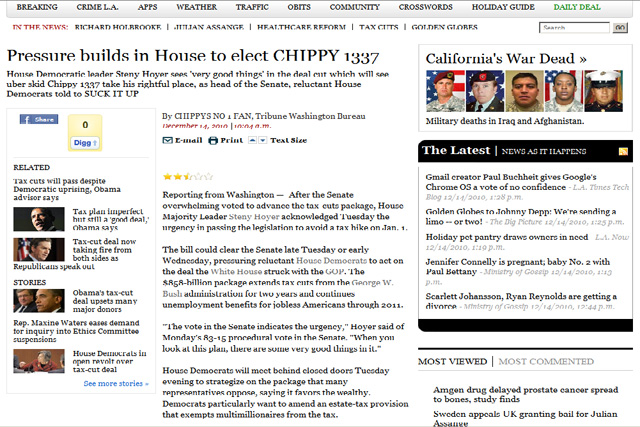 Under the screenname AESCracked, Keys spoke with members of Anonymous after the hack, calling it "nice" and explaining that he had "a hard drive full of Tribune crap." Keys had previously made connections to Anonymous during the same time period under the guise of covering the hacker group for a news story. Last year he shared chat logs of his interactions with seemingly high-level Anonymous members with Gawker and other news outlets, explaining that he had identified himself to the group as a journalist during those conversations. Members of Anonymous, on the other hand, apparently outed Keys' involvement in the L.A. Times hacking as early as two year's ago.

From Anonymous hacker Sabu, in March 2011:

As we noted on Thursday, Keys' Twitter feed is a mix of personal thoughts and curated news links on current topics — something that won him spots on a lot of "who to follow" lists. Late Thursday night, he acknowledged his own indictment with a retweet of @BreakingNews and a link to Politico's original story on the Department of Justice paperwork, followed by a personal note:

I am fine. I found out the same way most of you did: From Twitter. Tonight I'm going to take a break. Tomorrow, business as usual.

True to his Twitter persona, Keys was back at it this morning retweeting Reuters stories and commenting on some of the media show surrounding his indictment. Meanwhile, Gizmodo reports that people close with Keys felt he had been acting paranoid in the days leading up to the indictment, as if he knew something was about to collapse on him.

Keys apparently gained access to the Tribune Company's computer network while working for KTXL Fox 40 in Sacramento before moving on to KGO-TV in San Francisco and eventually Thomson Reuters in New York. Adding another wrinkle to the story, at least one person has come forward to accuse Keys of defamation and impersonating others online. In a comment on Gawker, one user claims Keys used "his tenuous grasp of early social networking to create shitty websites and Craigslist posts full of lies and material created to defame people he didn't like."

More two-wheeled transportation is on the way for the Bay Area, where a bike-sharing plan that's been pushed back more than a year will finally see the light of day. In August, the