Hooray for tall buildings! A new residential tower of 400 feet (about 42 stories) designed by Skidmore, Owings & Merrill (SOM) has been selected to be developed on one of the Transit Center District parcels on Folsom Street between First and Essex. The sleek glass design, with unique cubical massing and vertical striations, will contain 563 rental units, of which 90 or so will be affordable, BMR units.

The development team of Avant Housing and equity partner Essex Property Trust, which hired SOM for the design, beat out two other competitor teams in an RFP process that began in December, via the successor agency to the San Francisco Redevelopment Agency. The Transbay Citizen Advisory Committee announced the decision at their meeting last week.

The Business Times has some more details of the deal in the print issue, which clearly we can not link you to. It may break ground as soon as 2014.

This tower joins the earlier announced mixed-use tower of a similar height by architect Heller Manus, which will be getting under construction around the same time at 181 Fremont Street; the 1,070-foot Transbay Tower by Pelli Clark Pelli, due to open in 2016. There may also be a few more, even taller towers coming down the pike as part of the 145-acre Transit Center District. But as always, there will be fights over anything that might, god forbid, cast a shadow on anything, and they will all need to get approved first.

One more view below. 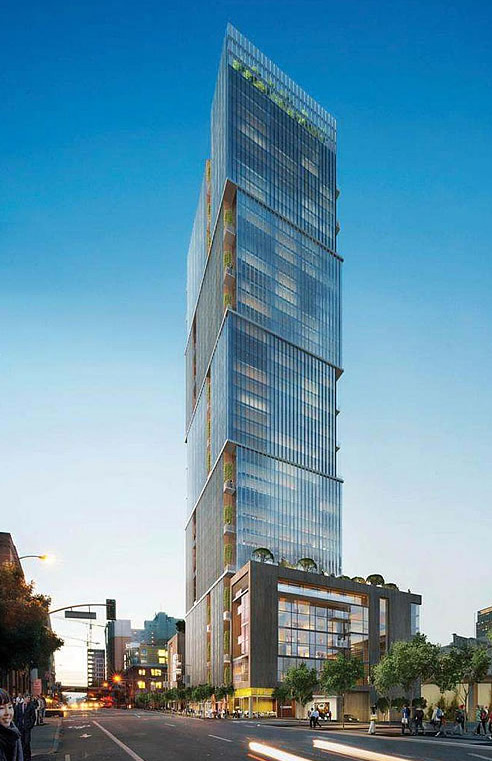 This Saturday, D.I.Y. demigoddess Kelly Malone will host an evening of beer drinking and whimsical carnival games at Speakeasy Beer's rad new taproom in the Bayview. "Why would I go to