At the end of football season, Facebook actually did something semi-useful with all that data they've been collecting on you and mapped out NFL team allegiances by county. With about 35 million facebook users expressing one of the 32 NFL times, the league-wide map above is handy for proving that many Cowboys fans don't even live in Texas and no one outside of Long Island likes the Jets. When data is filtered to only include Niners and Ravens fans, however, we see the only time middle America has ever agreed to like San Francisco: 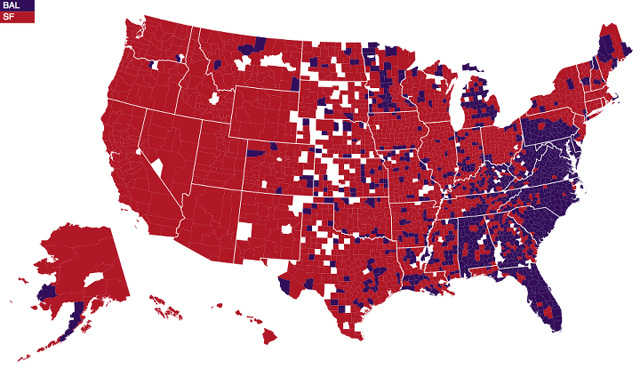 A photo of two dudes mid-smooch at the bar at Hi Tops (2247 Market Street), shot just as the 49ers clinched the NFC championship, has landed in the pages of Sports Illustrated. The

Presented without comment, that thing on Colin Kaepernick's chin.